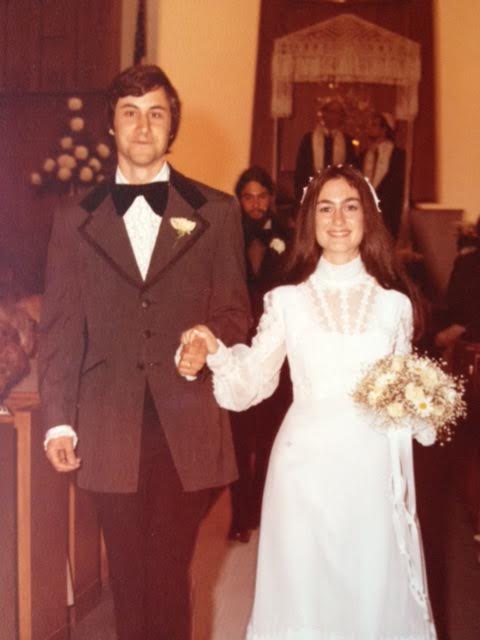 Dan and I started dating during my Junior year at Brandeis. He graduated that year, but lived locally, and would come by after dinner to spend the night. He always began phrases, “When we are married…” Finally I said, “Do you really think we’ll get married?” He responded affirmatively, so I said, “Why don’t you ask me?” He did, I said, “OK”, and thought we were engaged. We shopped for an engagement diamond. I wouldn’t have it for a few months; it was my 21st birthday present. He didn’t want to tell his parents until I had the ring, so he didn’t consider it official yet.

My mother had always told me that it took at least a year to get a June wedding date at our local temple, so I casually called my parents in October, 1973, and asked my dad, a temple officer, to look at reserving dates. I got a “congratulations, my darling children” letter soon thereafter. He reserved Saturday evening, June 15, and Sunday afternoon, June 16, depending on how formal we wanted it to be, and what our budget would allow. I said to Dan, “I guess we are really engaged.” And so we were.

My father had a limited budget and told me I could have an evening wedding with a sit-down dinner, or an afternoon wedding followed by a reception with passed food and he would be able to give us a nice check to help us begin our lives together. I thought it would be wiser to have the smaller, though still nice wedding and take the seed money. I had two bridesmaids, my closest friends from high school, friends to this day and a dear friend from camp who became an opera singer, sang the words from the Book of Ruth before I walked down the aisle. Nothing like today with the cast of thousands. My attendants made their own dresses (which looked a lot like my prom dress). Of course they were pink! One made my Juliet cap (I always wanted to be Juliet!), no veil. I couldn’t afford roses, so daisies had to do. I had first seen my chupa at the Cranbrook Art Institute. It was macrame (this was 1974), made for a friend’s wedding a year earlier. The artist was a friend of a cousin, who asked for the loan. My dad and his best friend constructed a way for it to stand on its own. There were no flowers or ribbons along the aisle, no wedding planner. This was a simple wedding. 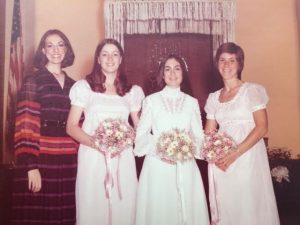 My attendants; Emily (the opera singer), Patti and Debbie, all dear friends to this day.

My brother had been ordained as a rabbi two weeks before my wedding. His first act as a rabbi was to co-officiate, with the temple rabbi, at my wedding…deeply moving for me. I didn’t know that there had been a small crisis in the rabbi’s study while I was dressing. My brother refused to be on the bima (alter) without a yarmulke, my totally non-religious husband-to-be didn’t want to wear one. His wonderful mother finally intervened and told him to relent and just put it on. I was nervous enough and glad that I only heard that story after the fact.

Our temple rabbi gave a lovely sermon, mentioned that he had watched me grow from a little girl into the jewel of the community. My brother began by saying that while Rabbi Rosenbaum could say he had known me since I was little, my brother could say he had known me since the day I was born and how proud of me he was. My father devised a way to tape record the ceremony (no videography in 1974). Occasionally I go back and listen. My brother’s speech is quite pointed and clever. He has gone on to be a well-respected scholar and educator at Hebrew Union College. He speaks wonderfully.

Dan and I argued about the color of his groomsmen’s shirts. I wanted them to match my bridesmaids. He would have none of it. He won, but made a valid point. This was one day, just the beginning of the rest of our lives and we needed to look beyond the ceremony. I try to remember that.

9 Responses to I Wanted the Fairy Tale