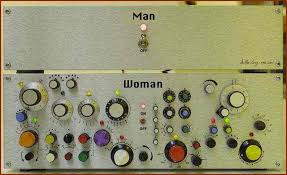 No doubt early homo sapiens sought amusement amidst their ceaseless struggle for survival, but early ventures proved unsatisfying.  “Rock, paper, scissors” doesn’t work well when all you have is “rock”.  And “pin the tail on the mammoth”?  Not when you have to use real mammoths.  But even if successful they would have been mere pastimes. “Games” denote contests between men and women. Exclusively.  They are Biblical, foretold in Genesis.

“So the Lord God caused a deep sleep to fall upon the man, and while he slept took one of his ribs and closed up its place with flesh;

and the rib which the Lord God had taken from the man he made into a woman and brought her to the man.

Then the man said, ‘This at last is bone of my bones and flesh of my flesh; she shall be called Woman, because she was taken out of Man’.”

But how many know the omitted verses next following:

Now some games flow directly from that fateful encounter in the Garden of Eden.  “Man” said “this at last . . . “  Henceforth “Woman” has said, “At last? I’ll show you ‘at last’”, which is why Man is doomed to wait with increasing impatience as Woman prepares to Go Out.  And then there’s “Does this dress make the ‘bone of your bones and flesh of your flesh’ look fat?”

Then there are the games that have evolved over time:

“If you don’t know what’s wrong . . .” and “Do you know what today is?” and “Do you notice anything different about me?”  Remember the movie, “War Games”?  “The only winning move is, not to play.”  Yeah. Good luck with that.

The trap games: “No, I am not angry” and “Do what you think is best” and “Surprise me!”  Abandon hope all ye who enter. Except it’s already too late.

I could go on.

Now it might appear to some, say, the “estrogen units” among you*, that I demonstrate a certain bias about the nature of these games.  Guilty as charged, but then, I think we likely are all largely blind to the games that we initiate.  Regardless, however, perhaps the words of Grantland Rice are worthy of heed: “It not whether you win or lose, it’s how you play the game”.

A wise therapist used the example of tennis.  Some couples take the court and seek merely to hit the ball back and forth, continuing the volley for as long as possible to enjoy the activity as a joint enterprise. Others play to score points. Same game, different approach. Way different result.  And it’s up to us which we choose.

* A coinage of a classmate, herself an estrogen unit.

12 Responses to In the Beginning a/k/a Original Spin