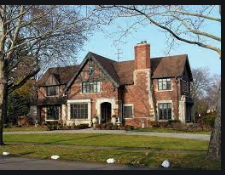 His office was in-home; a Tudor-style, something like this

I always burst into tears when we turned the corner and I could see the big Tudor house in a nice section of Detroit where Dr. Himelhoch also had his office. I was sure it meant I would get a shot in my rear end, a painful and humiliating experience.

Joseph Himelhoch was a large man with a white brush cut, thick black eyebrows and black-rimmed glasses. His wife, Sally, was his nurse. I have no idea how long they’d been married but my mother told me that Sally had converted to Judaism before they married. Dr. Himelhoch was a Reform Jew, but deeply committed to the religion. I’m sure he was a good, caring pediatrician, but his loud voice frightened me. He spent time with my brother and me at our annual exams and took great interest in both of us. He loved classical music, the arts and our family. My older brother Rick was devoted to music, even at a young age and the doctor joked that he’d been vaccinated with a record needle (a refreshing vaccination joke, and one that only people who know about turntables will understand)!

The Reform Jewish movement was VERY liberal in the late 1940s and early 1950s when I came along. Confirmation in 10th grade, rather than bar mitzvah at age 13 (girls definitely did not have bat mitzvahs yet) was the big thing at the time and my brother was not being prepared for his bar mitzvah. Dr. Himelhoch objected. I remember he said, “What happens if he grows up and wants to become a rabbi?” (The joke is: my brother DID grow up to become a rabbi.)

So, at about age 12, my brother began private tutoring in Hebrew and all the customs necessary for his bar mitzvah. Also at that time, our family began saying the blessings for Shabbat on Friday nights and going to Temple almost every Friday night (our Temple didn’t have services on Saturday mornings. Bar mitzvahs were conducted on Friday nights as well). And my brother was so smart and dedicated to learning, that his ceremony was only delayed by three months. We celebrated his bar mitzvah on Friday, May 5, 1961. My parents had a big party on Saturday night at a downtown hotel with an orchestra for dancing. I’m sure that Dr. and Mrs. Himelhoch were invited, but my brother must have those photos. I was eight years old and wore pink organdy. Eventually, my father became an officer of the Temple. Because of Dr. Himelhoch’s intervention, Judaism became a big part of our lives.

I was a sickly little kid. I was small, never weighed much and always got an annual case of the flu. I’d be in bed, throwing up for a week, with a bucket on a stool along side my bed. Mother also set up a small table next to my bed on which she placed some sustenance for me. On it, I also kept a photo of my favorite cousin, Connie. I’d been a flower girl in her wedding. Just looking at that photo made me happy and helped me feel better. 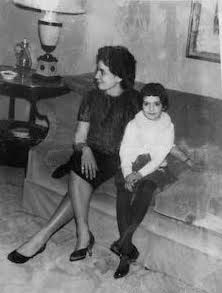 My mother would call Dr. Himelhoch, who would come to the house in the evening, after office hours. Of course he had his black doctor’s bag with him. He’d listen to my chest, take my temperature, advise me to drink fluids. He told my mother to serve me hot tea with lemon and honey. To this day, I can’t stand the smell or taste of black tea; a true sense aversion dating back to my days of throwing up. I would try to ingest some, but, since I didn’t like the taste of it, it frequently make me MORE nauseous. He would threaten that if I didn’t take in some fluids, I’d land in the hospital (I would eat Campbell’s chicken soup).

After checking on the patient, he’d sit with my parents in our living room (never the den), in the big wing chair in the corner of the room. Dad would offer him a drink (perhaps some schnapps) and the adults would sit and talk about weighty matters for some time. It was during one of those talks that the decision about my brother’s bar mitzvah was determined. I don’t remember if my mother was always present. Perhaps they talked some politics as well. I could hear their voices rise and fall. As I mentioned, Dr. Himelhoch had a loud voice. And we had a small, three bedroom house at the time.

But Dr. Himelhoch was not a well man. He was overweight. I believe he’d already had one heart attack. His wife, nurse Sally, fretted over him. I looked online for information about him, but only found a reference to them in the society pages, no death notice. Yet I know he died before my 12th birthday, as I had another pediatrician by the time I entered puberty. I believe he had a fatal heart attack and that put an end to the long family chats he had when he came around for house calls. We mourned his loss.