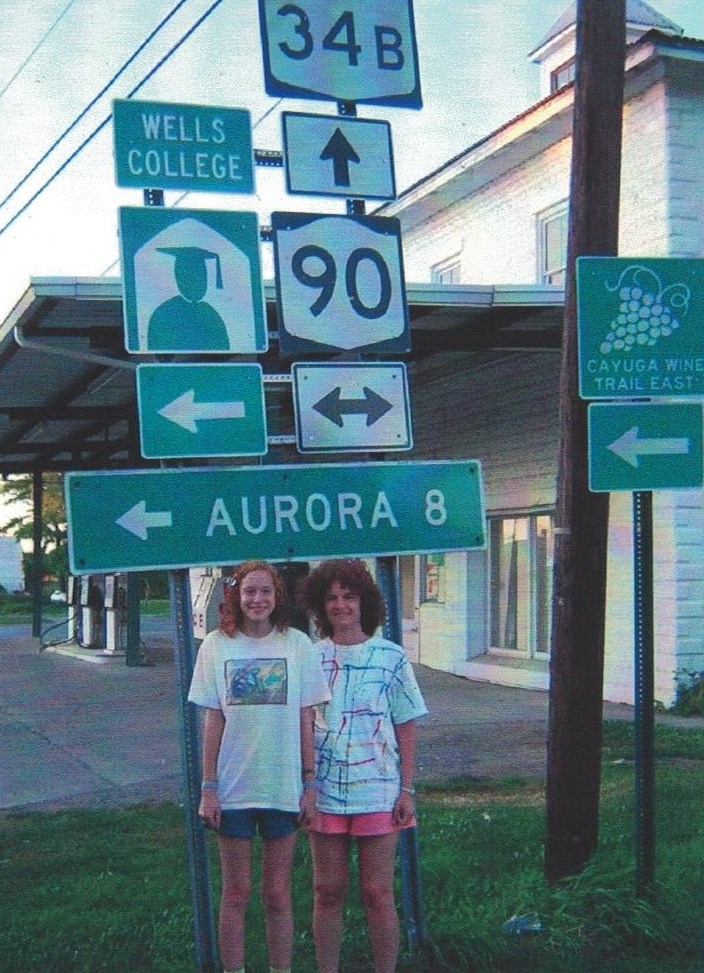 Still 8 miles away, we stopped to take a picture of the Wells College sign.

It’s odd, but I can’t remember details about any of my own first days of school, from kindergarten all the way through law school. I’ve tried really hard, and nothing comes to me. My children’s first days of school are more memorable, but for the most part not much of a story. However I will never forget taking my first child to college.

Instead of a heart-to-heart talk, we sang along with a "classic rock" station at the top of our lungs.

Every summer since my sisters’ and my children were tiny we have gotten together for a family reunion of all of my relatives. We hold it in different places each year, on the east or west coast, at a resort of some kind. In the summer of 2003, we cleverly planned the reunion for the week before my oldest daughter, Sabrina, was to start college in central New York State. The reunion was at a place called Skytop, in the Pennsylvania Pocono Mountains. It was only about 160 miles from Aurora, New York, more or less a straight shot north on Interstate 81. So at the end of our idyllic week of family time, my husband took the two younger kids back to Sacramento, everyone else dispersed to their respective homes, and Sabrina and I loaded up the rental car and set off for Wells College.

When I say loaded up, I am not kidding. We had 7 suitcases, one for me and the other 6 filled with Sabrina’s possessions. In those days, the airlines let you check 2 bags for free, so when the 5 of us left California for the reunion, each of us took 2 suitcases, one for him or herself, and one for Sabrina. That way she got 4 extra bags in addition to the 2 she was entitled to. They were crammed with summer and winter clothes, shoes, boots, sheets, blankets, and everything else she would need for an entire year of college in a climate with actual winter.

For this drive through totally unfamiliar territory we were equipped with only the directions and map that we had printed from Mapquest before we left home, since this was before GPS devices and smartphones. Sabrina was in charge of navigating, and fortunately she has a great sense of direction. However, there were two places where the road signs told us to go one way and Mapquest told us to go another, and we had to make a snap decision. Probably either choice would have been fine, but it’s always scary at the time, thinking you might be making a big mistake. That drive might have been a time for some mothers and daughters to have a heart-to-heart talk, but Sabrina and I just tuned the radio to a “classic rock” station and sang along with all the old songs at the top of our lungs.

Finally, in late afternoon, we arrived at the spot shown in the picture, where we saw our first sign for Wells College. I of course immediately pulled over to the side of the road and whipped out my camera. I was going to take a photo of Sabrina with the signs, but then a man came out of the little store behind the gas station and offered to take one of both of us. Thank goodness we already had a digital camera at that point, and were able to look at the picture he took, because it turned out he had been focusing on us, and had cut off the Wells College sign, which was the whole point. We explained what we wanted, and he took the photo which you see. (I am dismayed by my big hair, it must have been a very humid day.) Then we hopped back in the car and drove the last 8 miles to Aurora.

Aurora, New York is a town – actually a village – with a population of 720 people not counting the college students. No kidding, only 720 people, fewer than in the student body of Sabrina’s public high school. Wells College was a women’s college at that time, with under 400 students, 90-100 in each class. So it was certainly not a place where anyone could get lost in the crowd. It was a slice of small-town America, and that made it easier to leave my firstborn there on her own – the only possible danger seemed to be the Cornell boys, 25 miles away in Ithaca.

Since she couldn’t move in to her dorm room until the next morning, we spent that night together at the Aurora Inn, a luxury hotel built in 1833, with 10 guestrooms all lavishly furnished in the style of that period. It was the only hotel in Aurora, and having just reopened after a controversial renovation, it was running a promotion which made it affordable. It was far more posh than any place our family had ever stayed, and the two of us reveled in it. The next morning we woke up to a basket of warm muffins outside our room.

After devouring the muffins, and eating some more breakfast in the Inn’s dining room, we drove over to the Wells campus to find her dorm. She had been assigned to Glen Park, the former mansion of Henry Wells, founder of Wells Fargo as well as the college.

To say that it was spectacular does not even begin to do it justice. The common rooms on the first floor were just as elegant as they must have been when Henry Wells lived there, with a large fireplace, a grand piano, portraits of Wells family members on the walls, and plush velvet couches. There was a fabulous curved staircase coming down from the second floor, with a rich mahogany bannister, perfect for wedding or prom pictures. The upstairs had been remodeled into conventional dorm rooms without much character, but still, the students got to walk through all that elegance on their way in and out. Also, the bathrooms had bathtubs, pretty rare for a college dorm. Sabrina was happy about that.

We met Sabrina’s roommate Leigh and her parents, as we all set about unpacking everything into the two dressers, desks, and closets. I vividly remember making Sabrina’s bed, complete with hospital corners, and thinking that it might be the only time all year her bed looked this neat. Leigh’s father helped both girls get their desktop computers set up. This seemed to be the function of all the fathers who were there. At some point I went off to the Target in Ithaca to buy a set of towels and some other items that Sabrina had either forgotten or not had room to pack. Then there was a convocation for parents and students, and halfway through they had all the students file out and go elsewhere for a class meeting. They kept the parents there to talk to us about “letting go.” That was the hardest part, the realization that it was time to let go.

I spent another night in the Aurora Inn, and got a chance to see Sabrina the next morning before she went off for the day’s activities. She seemed happy and at home in this new place, and excited about what was to come. That was all that I could hope for. She was launched.

9 Responses to Launching my firstborn