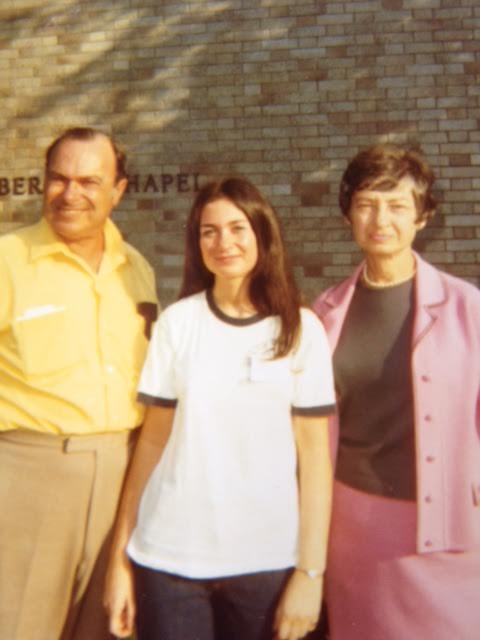 We spent the day before in Ogunquit, ME. I walked the beach with my dad and got a bit sunburnt. We had to drive 1,000 miles to get me from Huntington Woods, MI to Waltham, MA for the start of my freshman year at Brandeis University. It was September, 1970. Campuses across the US were in revolt. Mine was a closely screened class, since Brandeis had been the epicenter of the Student Information Strike Center and had gone out on strike the semester before when Nixon bombed Cambodia. But none of that was on my mind as we watched the Miss America Pageant in our little cottage the night before coming to campus (Phyllis George won).

One of my dad’s sisters lived in Worcester and some distant St. Louis cousin was doing graduate work at Brandeis, so Dad took them and friends of my brother’s (Rick had graduated a year earlier and was now in Israel, studying to become a rabbi) out for lunch at a nice Italian restaurant in Waltham before going to campus. By the time we got to Brandeis to check me in, my roommate, Carol Orshan from Canarsie, Brooklyn was already there. She expected me to wear overalls and have hay coming out of my hair. She didn’t know that Huntington Woods is 2 1/2 miles from the Detroit city limits. She was a tough cookie, very worldly. I learned to sleep nude from her. And she didn’t think twice about having guys stay over, even if I was in the room. At least she didn’t smoke (cigarettes) and we shared the same taste in pop music. But at this moment, Brandeis housing only had one key to the room and Carol already had it. So I had to stick with her as she came and went. Also, the heel to my favorite white sandals broke just as I entered the dorm. Not a good omen.

Brandeis was a young, disorganized school with no strong traditions. There weren’t upperclassmen to help unload the cars, and no real orientation. My dad brought in my luggage (no footlockers or boxes, just what I could pack in a few suitcases). It didn’t take me long to unpack, make my bed (I had signed up for sheets from the school laundry service that year). I felt like a lost puppy.

I knew a dear camp friend was also attending Brandeis: Christie Gunn. She was in the same quad in the dorm next door. I changed out of my peach pant suit into the “uniform”, blue jeans and tee shirt (see the photo with my parents taken on that first day – I think it was Sept. 13). I went next door and found Christie. My dad said my whole face just lit up. I had found my friend.

Christie was very self-assured, she had seen a lot of the world. We had known each other since being in the same cabin at camp in 1965 and been good friends since. Yet it was complete serendipity that we both wound up at Brandeis. I was SO glad to see her that day. We made plans to go up to North Quad to the Freshman Barbecue together, the four roommates.

At the appointed time, the four of us walked up the big hill, past the statue of Louis Brandeis, for whom the university is named, to the other quad that houses mostly freshman and has a large outdoor space in the center. A large party was ensuing and kids were awkwardly talking, trying to get to know one another. The four of us had our meals on our laps. Christie’s name tag read “Christie Gunn”. Some guy from Ridgewood, which had the reputation for being the hippie quad, was trying to pick me up. I was so insecure. I don’t think I was too interested in him, but I was trying to win points, so I said, “Her father is Hugh Hefner”. He didn’t believe me; he asked Christie. She shot me one of those “if looks could kill, you’d be dead” looks and responded that her father was Ed Gunn.

Christie’s mother divorced Ed Gunn about four months later and before our senior year, Christie took back the name Hefner, her father’s name, so that it would appear on her Phi Beta Kappa certificate. She has been Christie Hefner ever since, though she retired from Playboy more than seven years ago. And we are still friends.

Here we are almost 50 years later. 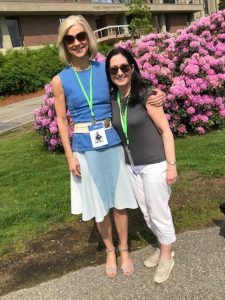 10 Responses to Waiting for Christie