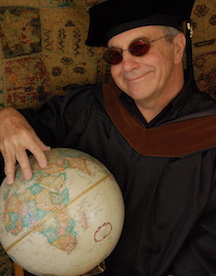 I have few recollections from first days at school. I liked shopping for new clothes and school supplies and looked forward to rejoining my friends as summer wound down through New England’s humid August.

“Heck,” my partner suggested “Go back to school. Who knows? — maybe you'll even learn something.”

My entry into Harvard was memorable for its assumptions. In those days, it was assumed that all Harvard freshmen already knew what was happening. I don’t recall anybody explaining anything to me, including the reason why, in freshman year, the administration chose to pair me with the most unlikely and mis-matched roommates in John Harvard’s history.

I recall orientation was subject to the bonhomie of dormitory proctors and harried advisors who often responded to questions with a glib, good-natured ‘sink or swim, young man.’ I was a good swimmer but the water was sometimes rough.

I can better recall my first day of graduate school. I’d had my undergraduate degree for decades but had rarely used it as a theater artist, jazz musician, communard, or starving-artist carpenter. I finally dragged out my Harvard A.B. to land a ‘straight gig’ in the publishing department of a non-profit, civic-education organization. Years passed. Under the shelter of my straight gig, I continued working in the theater and drafted two novels.

However, my non-profit lost several large, long-standing grants from the likes of the Ford Foundation and Carnegie-Mellon. Besides, the dreaded 40-hour, same ol’ day-gig concrete had flattened my learning curve. Ennui rose above my hips. Nothing could keep me at that job, even the benefits. The foundation’s beleaguered bosses were happy to give me a sweet severance package.

I lived in limbo for a while; no publishers were hiring 60-somethings, so I peddled a screenplay and published a novel.

In 1967, I had rejected any further intercourse with academia’s ivory towers — there was a world to explore and a war to stop. But time passes, shit happens, we change. I became interested in teaching. I wanted to share the knowledge and experience I had accumulated.

I dusted off my Harvard diploma, cobbled together an impressive resume of artistic achievements and went hunting. Some were impressed, others were not, but all insisted that I didn’t have enough alphabet after my name. They wanted MFAs or PhDs.

“Heck,” my partner suggested “Go back to school, get a graduate degree. You’ll get a taste of academia, earn a degree and probably learn something.”

A friend told me that the Los Angeles campus of California State University was about to launch a brand-new, multidisciplinary MFA program in television, film, and theater. That sounded good. A new program, a batch of adventurous artists from diverse backgrounds, ages, and aspirations.

I applied, was accepted, and with a “what the hell” attitude that came from eons of improvisation, I arrived at the campus for my first day of school. We met in the television sound stage, thirty-nine strong — writers, directors, producers, actors. We ranged in age from twenty four to sixty-something. We came from all over the United States, Mexico, Turkey, Egypt, Israel, and Japan. We looked and acted like the self-assured swashbucklers that we had to be to jump feet-first into a brand-new program that promised chaos first and an education second.

I thrived. Gone were the tired anti-authoritarian impulses that had earlier shadowed me after 16 straight years of schooling. I applied every ounce of artistic and organizational experience, even my curriculum-writing. The energy from my MFA fellow travelers swirled through the studios, workshops, and classrooms, and more than one professorial attitude was called on the carpet by this unholy triple threat of actors, writers, and directors.

I wrote like a fiend. I acted, directed, and codified my chaotically assembled past lives into a sprawling pedagogy. Along the way, we practiced in academia what I had practiced all my life — if you want something done, don’t just stand outside the gates, do it yourself.

Three years after my first day at school, I graduated with a 4.0 average. Actually, I scored 3.976; one professor had given me an A minus on a project. Diploma in hand, I was funneled directly into the screenwriting faculty of my new academic home, Cal State Los Angeles, a people’s university.