I never liked gym class in high school. I loathed all those sports where you had to hit objects that were hurtling towards you — soccer, baseball, volleyball, tennis, and the most dreaded field hockey. The one sport I somewhat enjoyed was basketball, because I was tall and could occasionally make a basket. But I distinctly remember telling my gym teacher at the end of senior year that the reason I had decided to go to Radcliffe was that they had no physical education requirement!

How basketball saved my sanity in law school.

Fast forward six years to 1974, and I found myself in law school at UC Davis. Winter quarter one of my friends discovered that there was an intramural women’s basketball league that we were eligible to play in. So she asked me to join the team, along with several other classmates. We had no idea what we were getting ourselves into. It turned out that all the other teams in the league were undergraduates, so they were younger than we were, and in better shape, for the most part. It also turned out that SOMEONE HAD CHANGED THE RULES since I was in high school. Under the rules of girls’ basketball that I knew, you only played on half of the court. The forwards stayed near their own basket and the guards stayed near the other team’s basket. One person was designated as a rover, and she was the only one who was allowed to cross the center line. If anyone else crossed the line, she was out of bounds. Also, we were only allowed to dribble the ball 3 times before passing. If there was a 4th bounce, that constituted traveling. Under the new rules, we discovered, we were expected to run up and down the entire length of the court — numerous times! — and to dribble in such a way that we were actually handling the ball. OMG! Our first game was a disaster. I think the final score was something like 78-2, and we were amazed that we even managed to get those two points!

Although we all felt as if we were going to die after all the unaccustomed running in that first game, for some reason we stuck with it. We got ourselves a coach, who was a male classmate who had played serious b’ball in college. We had practices, and we learned all the skills that we had never been taught growing up. Fast break, pick and roll, who knew there was so much complexity to the game! Gradually we started holding our own, and the word spread around the law school. The next year, we had enough interested women to have two law school teams in the league, and by third year we had enough law school teams that we had our own league. Everybody wanted to get in on the fun! Much better than constitutional law or trusts and estates!! All our teams got team t-shirts and matching socks, and we actually played pretty decent basketball. And my team, the Satin Pumps, was the league champion! We had come a long way, baby! Basketball turned out to be, unquestionably, my best memory from law school, and the thing that saved my sanity. 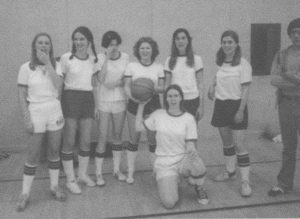 Here is a picture of the Satin Pumps, with our coach on the right (partially cut off, unfortunately). Our captain, Denise, is kneeling in front with the ball. I am the one with the braids, second from the left.

6 Responses to Law school and basketball