Prompted By The Twilight Zone
7 comments. 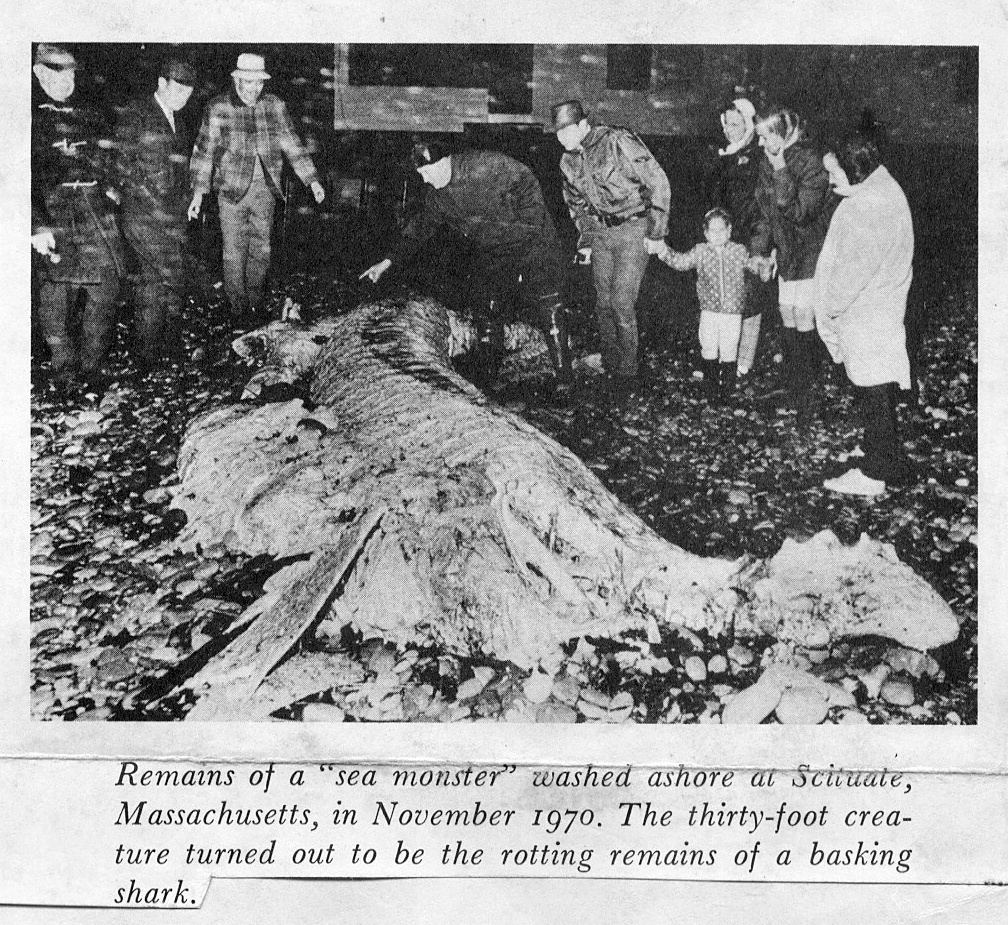 “This was a bad idea,” I thought as I peered ahead, struggling to stay on the highway. It was pitch dark and we were mired in traffic. But we weren’t in Boston and it wasn’t rush hour. It was 1:00 am on Monday morning and we were nearing Scituate, a coastal town just north of Cape Cod. The fog was so dense I could barely see the taillights of the car in front of me.

“When will we ever get another chance to see a sea monster?” Patti urged, sealing the deal.

Two hours earlier, Patti and I had been studying in my dorm living room while Aaron and Nick turned on our tiny black-and-white TV to catch the 11:00 o’clock news. The lead story: a sea monster, or something like one, had washed ashore on the beach at Scituate. “Let’s go see it!” suggested Nick. This was not the sort of frivolous activity I would usually waste time on, especially with homework to do. But it was Sunday night and we were tired and bored. “When will we ever get another chance to see a sea monster?” Patti urged, sealing the deal. We piled into my GTO and headed for the coast.

But now, fogged in with dozens of others who had the same idea, I wasn’t so sure. We had no idea exactly where the sea monster was. How would we even find it? Trees lined the road, blocking our view of the beach.

Then we began to see cars parked on the shoulder, lined up on each side of the highway. This must be it, we figured. We pulled in behind them and we made our way through the trees onto the beach.

It was dark, but we heard voices up the beach. As our eyes adjusted to the gloom, we saw an oval ring of people slowly circling a dark mass, writhing and chanting in a primitive, tribal way. We got closer.

My memory is as foggy as the night. I remember the thing as mammoth—maybe fifty feet long and as high as our waists—ugly, and unrecognizable. I remember we joined the ring and danced around the monster, but I have no idea what kind of dance. I remember we joined the chant, but I have no idea what we chanted. (Give Peace a Chance? Puff, the Magic Dragon?) I seem to remember reaching out to touch the thing and feeling cold, damp, solid flesh with a bit of give. Did I really do that? I don’t remember any smell, though it must have reeked. Eventually we drove back to Cambridge and fell into bed.

The scene has only grown more surreal with passing time and fading memory. Did it even happen? I have two reasons to believe it did. First, it was all over the news the next day, and the reports and photos survive online (though the creature was apparently somewhat smaller than I recall). In the Crimson, Harvard’s Assistant Curator of Fishes (who knew there was such a person?) identified it as a decomposing “basking shark,” a type that likes to lounge on the surface of the water, where it is often mistaken for a sea serpent and is vulnerable to being hit and killed by passing ships. Our disappointment that it was not, in fact, a sea monster was almost compensated by learning about this species of sunbathing shark.

The second reason is that, later that day, I wrote a paper about it for my beginning French class. The class was constructed around dialogues, so I imaged one between us and le monstre de la mer. Yes, I still have it. Que faites-vous ici? Que voulez-vous? “What are you doing here?” we asked. “What do you want?” Je veux vous manger. “I want to eat you,” replied le monstre. “But first, bring me the salt and pepper. And some red wine.” I was, apparently, still punchy from lack of sleep.

Still, my teacher liked the paper. Excellent, he wrote. C’est vraiment tien drôle. It’s really quite funny. So I guess I spent the evening doing homework after all.