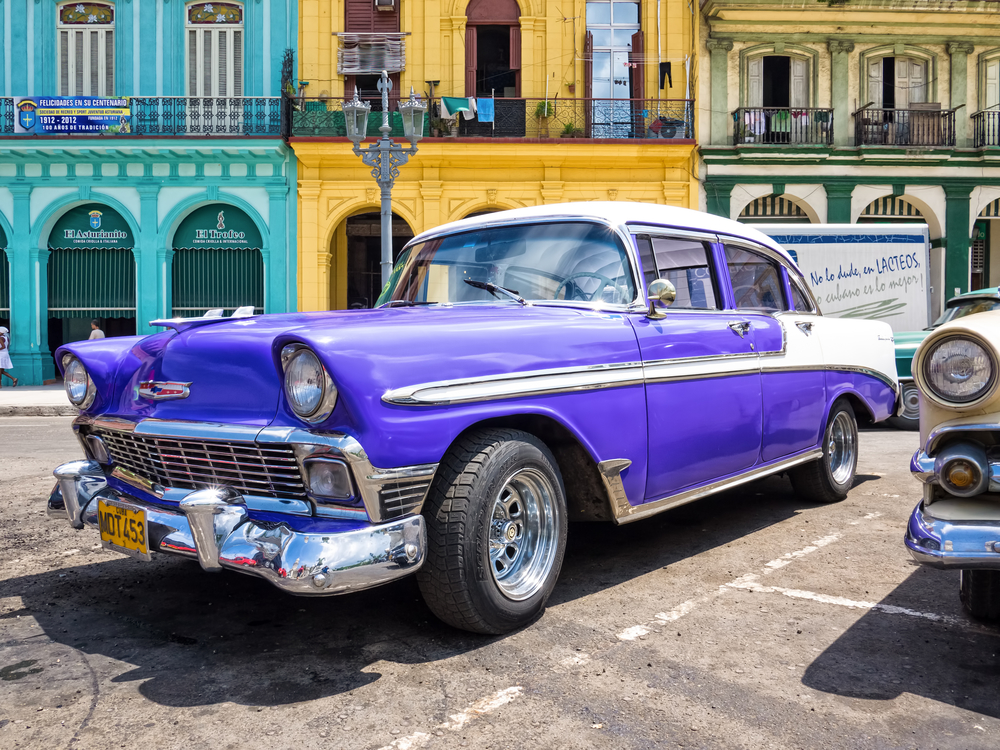 I’m handy. I began early, learned how to use hand tools from my father, a hands-on electrical engineer who designed and built prototype instruments to measure outcomes of physics and biology research projects. I’ve constructed everything from mercury barometers to mine shafts to cherry wood cabinets, from stage sets and circus rings to birch plywood captain’s beds, from community centers to kitchens. I’ve rebuilt an engine for a 1956 Chevy and another for a 1936 Chrysler.

These days I refuse to assemble anything. I was cured of ‘some assembly required’ by the fiendish contraptions offered by Ikea, founded by a Swedish Nazi sympathizer. He was clearly as vicious in his furniture-assembly practices as he was in his political sympathies.

But enough about circus rings and Swedish do-it-yourself. I want to take us to another world, where ‘some assembly required’ takes on a very different form. Years ago I made a second trip to Cuba, to attend a Cuban-American writers conference in Havana. 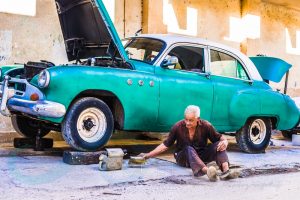 We’ve all seen pics of flashy American cars restored on the streets of Havana. But behind them all, there’s a Cuban mechanic.

Cubans make the best mechanics in the world. If you’ve ever had to keep an old car running, you know what I’m talking about. You don’t have the right tools. You work in the street. Your feet stick out in traffic like a couple of ducks.

Because of the blockade and the economic embargo, there have been no new cars or parts coming from the United States for over 50 years. Every piece that breaks has to be manufactured from junk or scabbed onto the machine from other relics. Parts from dead and dying creatures are spirited away to be grafted onto other, more deserving vehicles.

Havana is full of old cars. Parked at the curbs like memories, ancient Fords, Chevys, and an occasional Edsel jockey for space with more recent generations of Russian Volgas and Italian Fiats. 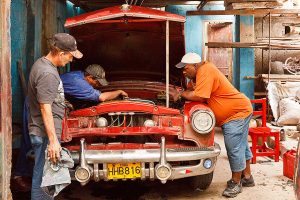 In America, these old cars flash dollars and cents. According to the law of supply and demand, even a derelict version of one of Havana’s American cars would command an obscene price tag from nostalgic collectors. A 1950 Plymouth, its Mayflower hood ornament under full sail, advertises the birth of the Maytag, the Kelvinator, and the single-family home. The tailfins on a ‘58 Dodge Coronet celebrate America’s entry into the space race. A ‘55 Chevy triggers flashbacks to Ozzie and Harriet.

In Cuba, old American cars don’t retire in polished glory to meticulous garages and automotive museums. They’re everywhere. “Mira, compañeros,” I shout to my friends as another American dinosaur roars past. “Look at that Chrysler New Yorker!” The smoke from its passage rises to join the cloud of sulfates hanging under the Vedado district’s graceful trees. I don’t care about the smog. I breathe it in like perfume and laugh with delight. I can recognize every model, every year, the lines of the bodywork surging up from the archives of my adolescent past like a Marilyn Monroe pin-up. 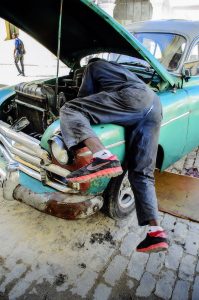 By the simple miracle of their rattling passages through Havana’s streets, Cuba’s cars confirm that Cuba’s revolution is alive, hanging on, making it. Havana’s mechanics are thumbing their nose at the American blockade. They have learned how to pick the bones of their vanquished oppressor.

But what about the Cubans? How do they feel about their old cars? Are they inspired by their own ingenuity? Do they celebrate tiny victories over worn-out shock absorbers, disintegrating carburetors, and slipping clutches?

Some mechanicos are proud. We drove to uno partida de beisbol at Havana’s Estadio Panamerica in a Plymouth that was 50 years old and looked brand-new in dim light of the Cuban night. The old car rode like a Sherman tank but the tape deck was digital. We listened to Chico O’ Farrell play the saxophone while every pothole in the road transmitted itself through the chassis to the steering wheel and the seats.

“Con seguro,” the driver replied. “Puro.” He laughed and patted the dashboard.

Others were modest about their ingenuity. After the game, we flagged down a young guy in a Studebaker. It was Saturday night and there wasn’t a cab in sight. We asked the driver if he would take us to a restaurant.

“No problema,” he replied and glanced in the rear-view mirror for the cops. As in America, it is against the law for unlicensed Cuban drivers to accept fares. We piled in and bumped down the boulevard. The driver shifted the gears with a lever mounted on the transmission hump. From some deep pool, I pulled the recollection that these old Studebakers all had column shifts.

“¿Original?” I asked and pointed to the gearbox. 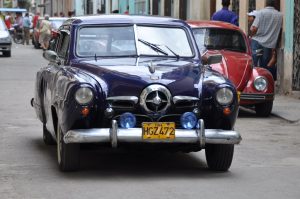 “No, no,” he replied and grinned. “Volga, Rusia, todo. Motor, caja, transmission.” My jaw dropped in amazement. This guy had completely replaced the 50-year-old organs of the Studebaker with a 30-year-old transplant from a Soviet passenger car. It was an impossible task. The cars were different sizes. The engine mounts wouldn’t have fit. Did he have to shorten or lengthen the driveshaft? How did he get the shift lever to surface at the right place beneath his hand?

He was a fourth-year engineering student and had done all the work himself. Over and over, I congratulated him on his ingenuity while he laughed and shook his head. “Insignificante,” he said. “Es necesario, simplemente.” 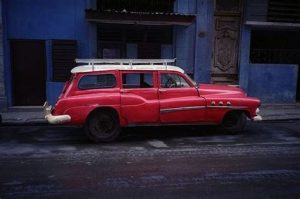 The next day, I spotted a ‘48 Buick Special sitting by the curb of a narrow alley. The Buick’s grill had long since disintegrated. A bundle of one-inch galvanized pipe sprawled through the broken-out rear window, waiting to be delivered somewhere. The once-skirted and chromed wheel wells had been torched into ragged half-circles to allow for larger wheels to be installed on the axles.

Three men squatted on the ground in front of the Buick. All three were dressed in ragged t-shirts and cut-offs. All three were slathered with grit and oil. Two of them held the knuckle of a universal joint on a paving stone that had been torn up to form an anvil. The third man beat on the joint with a broken ball-peen hammer. The men grimaced while the universal joint jumped and shifted beneath every blow. 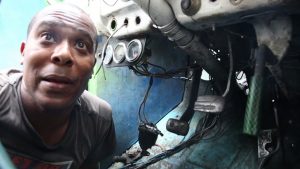 “¿Original?” I asked, and laughed.

The hammer stopped in mid-air. Three strained and grease-stained faces looked up at me. There was no acknowledgment, no reply. Instead the three men turned away and resumed their task. There was no solidarity here, no revolution to celebrate. There was nothing to laugh about.

* “Los Mecánicos” was published with the title “Under Havana’s Hood” in Cuba, a Travelers Tales anthology.