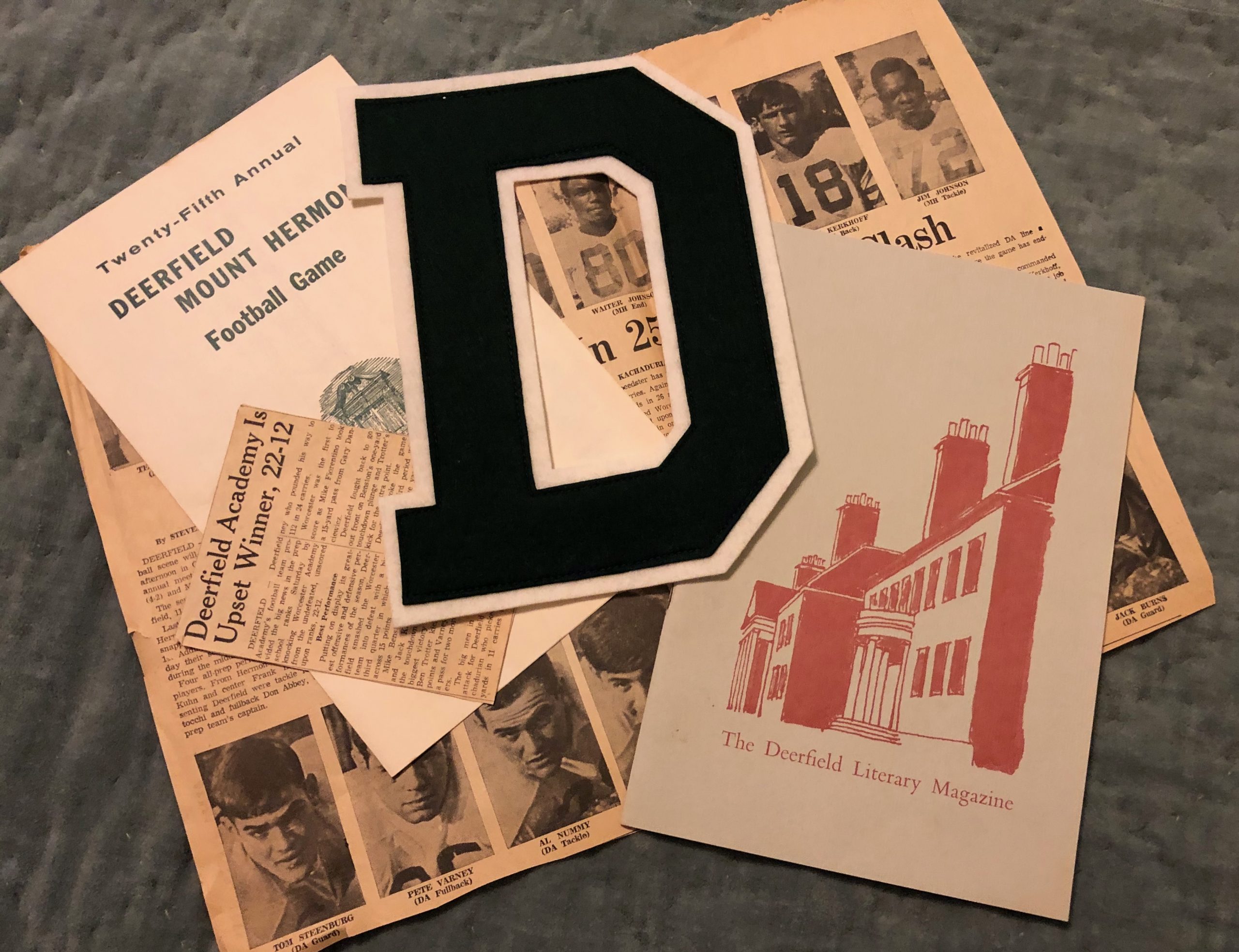 Here’s the thing about memorabilia: it’s not just a matter of collecting.  You have to remember where you put it.  I always knew I had a bunch.  Somewhere.  Mostly, if not entirely about stuff from years ago, I think.  Prep school stuff.  And . . . .   What else?  I can’t remember the last time I gave it any thought, let alone looked through any of it.  Having moved a lot in the last thirty years the box (boxes?) were well traveled.  Now, just where were they?  Our home has a basement and an attic.  Had to be in one or the other, right?  So off I go.

And looking at how the dates fall I realize that it’s September 1979. Charlie was born Thursday September 27, 1979. Charlie and his mom came home from the hospital on Sunday the 30th. The day the picture was taken.

And, there in the attic, stashed behind suitcases and space heaters lie two boxes.  Both bearing labels “Tom’s Car”.  Sounds promising.  In fact, one looks very familiar, a box that originally contained a waffle iron.  I peer inside.  Bingo! And I remember about “Tom’s Car”.  That was when I was moving from Chicagoland to Lake Placid.  My wife was going to remain in Illinois while I settled into the house I rented and undertook my study for the New York Bar and the relocation of my consulting business.

I decide to investigate the less familiar one first.  There is what appears to be an address book on top.  I realize immediately, upon opening it, that it was my dad’s address book.  I thumb through it.  Clearly, he had been using it for quite a number of years.  As I go through the alphabet I see page after page of familiar names.  Not that I knew all of them, necessarily, but I remember my dad speaking of them.  I see that the entries for my sisters Barbara and Suzie include the names and dates of birth for their children.  And when I get to mine I see entries for my sons.  Certainly, the book dates from at least 1979.  And I chuckle at the multiple address entries for me over the years.  And names of what are now ex-wives.

Next up is a notepad.  As I open it the top two or three sheets fall out.  Although my dad was a physician his handwriting is easily parsed.  As I skim his notes – “moving to L.P Thursday Laura staying home temporarily” –  I realize that these are notes he made of a call from me.  I used to call him every Sunday, usually late morning.  I looked at the top of the page: “Tom 10/17”.  OMG.  That’s October 17, 2004.  I was in Chicagoland.  In the wee hours of the Thursday morning hence Dad would suffer a stroke.  I would get to his bedside late that afternoon, while he was still conscious and be with him in the wee hours of Friday when he passed away.  So, these notes were the last “installment” of what were likely weekly notes.  I hadn’t called Dad after that Sunday, and by the time I arrived he was unable to speak.  So, in a very real sense these were his last words “to me”.  And I have them. 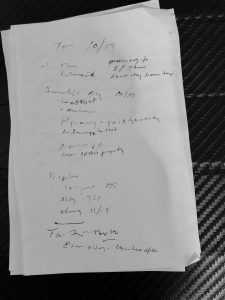 Returning to the waffle iron box I discover that most of the contents relate to my prep school years. Summer reading folders. Concert programs.  Football programs.  Football clippings.*  A third place medal from an interscholastic track meet.  And a pristine athletic letter.  I had more than one; don’t know which one this was.  I flip through the clippings, recalling the games.  Scanning a program from my senior year I see the name of a teammate, Buzz, my best friend.  A bit undersized for football but he was a sprinter with surprisingly good hands.  We referred to him as our Secret Weapon.  Sadness overtakes me.  I had not stayed in touch in the last twenty years or so, and I discovered to my chagrin this winter that Buzz had passed away last fall.  Complications from dementia.  And I realize that as I write this, Thursday the 28th, that today is the day scheduled for a memorial celebration of his life to be put on by his sons in his small village in the Northeast Kingdom of Vermont.  The get-together was cancelled due to Covid.  Hope it will be rescheduled.

Many pictures, including a number I don’t recall seeing of my dad and his brothers and cousins.  And then a picture of me holding an infant.  Charlie, my first born.  I was thirty.  And had hair.  As did Charlie.  Looking more closely I recognize the room as the small bedroom of our first house, the one I had used as a study and that would now serve as Charlie’s room.  I’m sitting at the desk.  I notice the calendar in the background.  Hard to make out but I can discern sufficient detail to realize that it’s a September page.  And looking at how the dates fall I realize that it’s September 1979.  Charlie was born Thursday September 27, 1979.  Charlie and his mom came home from the hospital on Sunday the 30th.  The day the picture was taken. 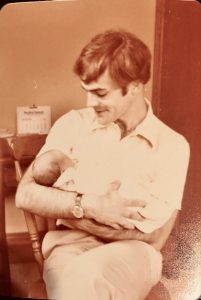 And then, just before I close up the box and this trip down memory lane I see a small newspaper clipping preserved alongside pictures of my sister Suzie and me as young children.  And I laugh.  And laugh. 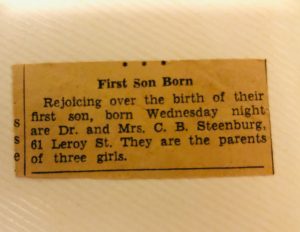 There it is, bold as brass.  My birth merited a news article.  And what an encapsulation of dynamics!  The headline.  And the final sentence that discloses both the reason for the headline and for the emotion.  First son?  My sisters Barbara and Suzie were born in 1947 and 1948, and I in 1949.  Within twenty-three months of one another.  My parents had wanted six children but the war put a crimp in that plan.  Post war they were making up for lost time.  And then I was born.  The article doesn’t mention my given name, Thomas.  In the tradition from my dad’s mother’s family, the first-born son is Thomas.  Like Dad’s older brother, my namesake. (More about him in next week.)  But for that tradition I think there was a high probability that I might simply have been called “Quits.”  ‘Cause that’s what happened.

* The player at bottom left in the large clipping at the bottom of the featured image collage is me.  My “Boston” contemporaries may recognize the name of the teammate next to me whose picture is obscured: Pete Varney. 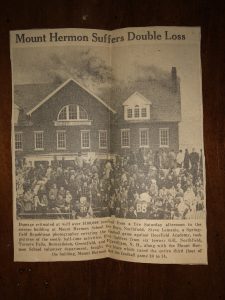 November 1965.  A grudge match between my school, Deerfield, and our local arch rival, Mt. Hermon, who were the home team.  Mt. Hermon was on a seventeen-game winning streak.  We came into this, the last game of the season with one loss.  Sometime in the first half, the Mt. Hermon science building, immediately behind the field on the visitors’ (our) side of the field, went up in smoke.  The game continued, in large part to keep the five or six thousand spectators away from the fire.  We won.  An iconic photograph (not this one) showing the two teams on the field and the fire ablaze in the background, became the AP Sports photograph of the year for 1965.  I recall going to a convenience store in my hometown the following Thursday, Thanksgiving, and seeing that photograph on the front page of the New York Daily News.

Actually, my memories of the game are vague.  I did not play.  I had taken a shot to the head the previous week and was sitting this one out, in what would now be known as a “concussion protocol”.  That doesn’t account for me vague memories (I think). I do remember, vividly, coming out of the locker room for the second half and seeing monster flames pushing through the roof of the building.

15 Responses to Lost and Found