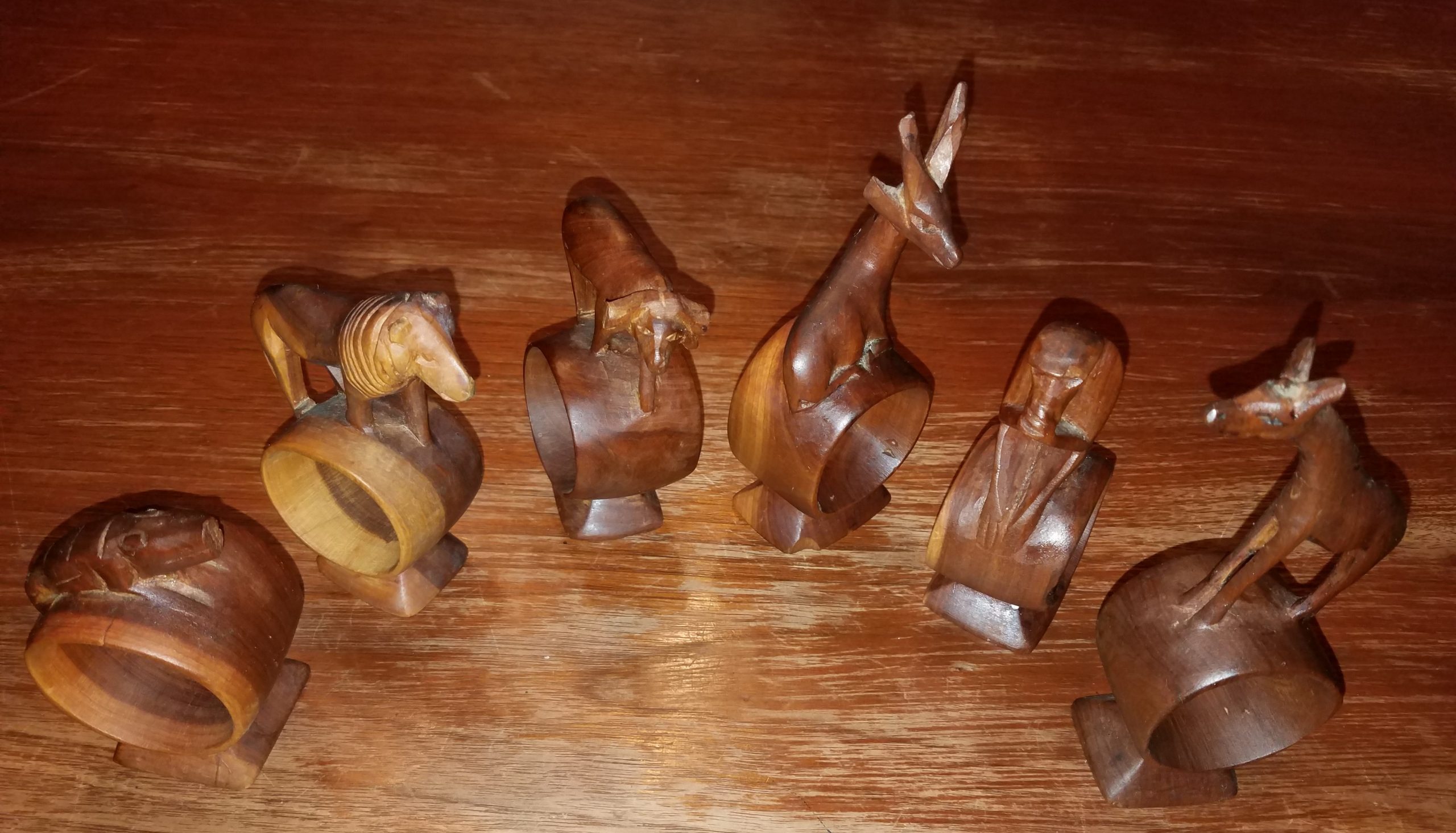 I have so much memorabilia that I don’t even know where to start writing about it. If I ever have to move, I can’t imagine how I will sift through it all. Looking at the two choices given in the blurb for this prompt, I had to laugh: Have you displayed your memorabilia in frames or is it collecting dust in storage? Answer: Neither one. It is collecting dust all over the house.

I have so much memorabilia that I don't even know where to start writing about it.

Am I a hoarder? I don’t think so. But I do have an awful lot of “favorite things” that I can’t part with.

Baby shoes – my own, in the original box, labeled in my mother’s handwriting. Three more boxes of baby shoes, for each of my kids – I kept thinking that the next baby could wear the shoes of the previous one, but they all had different size feet when they started walking. I also have their first little sandals. And a pair of ruby slippers, a la Judy Garland, that I think both of my daughters wore.

My first bikini, that I wore in about 1965, that some relative had brought back from Greece. Very skimpy! Not really one of my favorite things, now that I think about it.

Formal dresses from both my high school prom and high school graduation, which couldn’t possibly fit me now. Also my wedding gown, which nobody else in the family is going to want to wear. On the other hand, I have the bridesmaid outfit that one of my sisters wore at my wedding, which was a long velvet skirt and ruffled blouse, and I have worn the skirt twice recently with different tops, once to a Jane Austen tea and once to a Pirates of Penzance singalong.

My high school class ring, which I wore for the first time in decades when I went to my 50th reunion in 2018. My classmates were very impressed, because everyone else had either lost theirs, or had gained too much weight to be able to get it on their finger.

My wedding ring and my husband’s, from my first marriage, engraved with both sets of initials and the date. I wonder if either of my kids from that marriage would want them. Otherwise, I should probably have them melted down and made into something new.

I seldom buy souvenirs when I travel (or maybe just a t-shirt), but there have been a few memorable trips where I did. I brought back a hand-tooled leather-wrapped whiskey decanter from Spain for my parents in 1969, and now that they are both gone, I have it once again. It not only reminds me of the trip to Spain, but of my parents and how much they loved it (although I don’t think they ever put whiskey in it). I bought a caftan in Morocco in 1981, which I wore a few times after the trip, and it was useful when I was pregnant, but it gets incredibly wrinkled hanging up in the closet and has to be ironed before wearing, so I never do. I wish I had bought a rug in Morocco instead.

If I decide to look for souvenirs, I try to find ones that are functional as well as beautiful, like this trivet I got in Israel in 2009, which we use all the time. The Hebrew letters say Jerusalem. I also bought some beautiful Star of David necklaces on that trip. 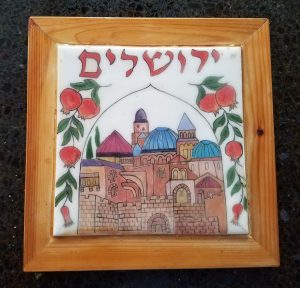 And the travel souvenir that has seen the most use, for over 30 years, is a set of hand-carved wooden napkin rings from Kenya in the shape of different animals, which is the featured image. I got these on my honeymoon trip in 1983, and when the kids were little, they loved playing with them. Consequently all the sharp points have broken off of four of them – the poor crocodile (far left) lost its entire snout, and the three with horns lost all or part of their horns – but they still look cute and function well as napkin rings. And it is convenient to have them all be different, so all members of the family know which napkin is theirs.

Political buttons from the ’60s and ’70s. These are primarily, but not entirely, from the 1968 McCarthy campaign. Also including the Yippie! button that Phil Ochs gave to me in the Chicago Amphitheatre in 1968, which I have written about previously. And a button with a caricature of LBJ pulling up his shirt to show his gall bladder surgery scar.

Political posters, including this nice one from the McCarthy campaign that my parents had framed, which is why it is hanging on a wall in my house, instead of rolled up in a mailing tube like all the others. 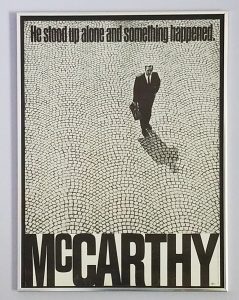 Calendars from over the years, which commemorate all the trips, parties, rehearsals, school functions, and other miscellany of life. These have come in handy surprisingly often when I want to refresh my memory about details of a specific occasion from long ago, because they are almost like diaries. They can also be artistic. For at least the last twenty years, I have used the Mom’s Calendar, which has a column for each member of the family to write what they are doing. Often when we took a family trip, my husband would draw a scene of the place we were going, because he had the width of five columns and the length of however many days we were going to be gone. As an example, here is part of the page for June 2007, showing scenes at Stanford Sierra Camp, where we went for a week every summer. On the left are two people out on Fallen Leaf Lake in a canoe, in the front right is our minivan with a clamshell on the roof to carry all the things we needed to bring with us, and behind the minivan are a couple of the cabins with trees around them, and the Sierras in the background. 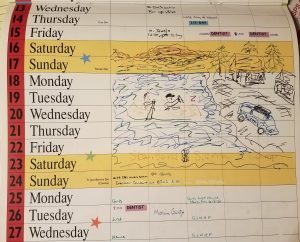 I have saved wa-a-ay too much memorabilia pertaining to my children, which I am not going to discuss, beyond saying that I do have all of their baby teeth in labeled envelopes, as well as the notes they wrote to the tooth fairy, some of which I included in an earlier story. Other items may become material for future stories, or that book I am always threatening to write. But for now, kids, if you are reading this**, you are safe!

18 Responses to My Favorite Things