The Tablecloth by mizgeee (1 Story)

When I was a young woman, my mom told me about a beautiful lace tablecloth that had been given to her by my great aunt and great uncle, who had bought somewhere in Europe in the 1930s. She said if I ever got married she would be thrilled if I had my wedding dress made from it. I never saw the tablecloth until after my mom died in 1988, when I retrieved it from the back of her closet as my brother and I were clearing out her house. To my chagrin, it was stained and wrinkled, and not the fancy lacy-lace I had imagined. It was linen cutwork, which, although lovely in its own way, is just not the stuff of wedding gowns. At that time I had many fantasies of marriage but no actual opportunities, and in fact it seemed more likely that I was headed permanently down the road of the single life, so I put the tablecloth in the back of my own closet and forgot about it.

When I was a young woman, my mom told me about a beautiful lace tablecloth that had been given to her by my great aunt and great uncle, who had bought somewhere in Europe in the 1930s. She said if I ever got married she would be thrilled if I had my wedding dress made from it.

Funny how things turn out. I met Art, my future husband, in 1993, and in 1994 we moved in together. I had a big garage sale where I unloaded just about everything I owned, because Art’s place was small and besides, I was ready to start a new life after having lived in the same apartment for 18 years. I put the tablecloth out among the items for sale. Art was shocked and tried to talk me out of selling it, as he recognized its sentimental value even though I did not. I told him the tablecloth had been my mother’s fantasy but not mine, and I had no use for it.  On the day of the garage sale, my three friends Sandy, Rita, and Reva showed up to check out the merchandise. Sandy spied the tablecloth and asked me why I was selling such a lovely thing. I told her the story of how I had inherited it from my mom, and how she hoped I would make my wedding dress from it, and how, when I finally saw it, I wasn’t that impressed with it. Sandy was appalled at my lack of sentimentality (it was, after all, a family heirloom–forget its potential as a wedding gown!) and said she’d take it for whatever I wanted for it. I sold it to her for five bucks, and she and Rita and Reva took off with it and a few of my old Sarah Arizona sweaters.

In 1996 Art and I decided to get married. We wanted a chuppah as part of the wedding ceremony, even though it was a secular ceremony to be performed by a judge, art’s old law school professor and pal. We were incorporating a few Jewish traditions into the ceremony, and this was one we both felt strongly about. Art had the idea of getting the tablecloth back from Sandy to use as the chuppah, combined with his late father’s tallit (prayer shawl) that his mom had stashed away. It would be a loving tribute to our late parents and a way for them to be present with us on our special day. Brilliant idea, and so sweet! Feeling more than a little sheepish, I called Sandy to ask if she’d mind if I took the tablecloth back from her, as I needed it for a very special occasion. She laughed out loud, and told me that the only reason she’d bought it was because she knew that I would want it someday, and if I’d sold it to a stranger I would never see it again! Now there’s a mensch for you, and a damn good friend!

So, I had the tablecloth drycleaned and it came out beautiful. We got Art’s dad’s tallit from his mom, and we attached it to the back of the tablecloth.  The whole thing was supported with four bamboo poles that I had wrapped with purple tulle. Art’s mom and brother held two poles, and my dad and brother held the other two. David, the judge who performed the wedding, mentioned the tablecloth and tallit in the ceremony as having belonged to my mom and Art’s dad, and it was a very touching moment. Our parents were with us even though their bodies were not. 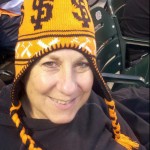 9 Responses to The Tablecloth