Lost in Translucence (a Patois) by jonathancanter
25
(35 Stories)

Prompted By Lost in Translation
18 comments. I saw a movie a while back, set in Tokyo, co-starring a world-weary Bill Murray and an alluring Scarlett Johanssen.  He was 52 years old, but looked older; she was 17 years old, playing a 22 year old character, and looked…like she might have quite a career ahead of her.  They talked and talked, and talked, and nothing happened.  I assume something was lost in translation.

In Quebec City I once ordered onion soup, and was served onion rings, or maybe it was the other way around.  Les oignons, bien sur.

Many times (well, a few times), I used “LOL” as an acronym for “lots of love.”  Sometimes this caused an eyebrow to rise.  More recently I’ve been educated by the younger folk that “LOL” is a generally accepted acronym for “laugh out loud”.  Which is a different sentiment than “lots of love.”  Fortunately, I’m too old to be embarrassed by internet ignorance, as are most of the people I communicate with.

Speaking of acronyms, I hate “HOV.”  It’s an acronym on signs for highway lanes which are restricted to cars with more than one occupant, but I can never remember what words it is an acronym for. I’ve driven halfway to NYC banging my brain to come up with a palatable de-acronym.  Close your eyes if you don’t want to know, but I just looked it up for the hundredth (+/-) time.  Completely unintuitive, it stands for “High-Occupancy Vehicle.”

Also in that category is “OPS”, which is thrown around all the time by baseball talkers, as a rating of batting proficiency.  It stands for “on-base plus slugging”, which is “a sabermetric baseball statistic calculated as the sum of a player’s on-base percentage and slugging percentage.”  I need a translation.  I’ll stick with “HR”, “RBI” and “BA”, and whether the hitter has a gleam in his eye and a confident swagger. 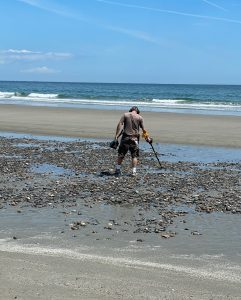 Finally, there was a guy with a metal detector working the beach in front of my house this morning, in the vicinity of where my grandfather’s gold ring slipped off my finger and was lost to the sea (in waist deep water) about 65 years ago.  My mother had given me the ring as a keepsake from her late father and was disappointed and unforgiving of the loss.  I acknowledge carelessly twisting and loosening it on my finger, even purposeful malfeasance.  I vividly remember its last shimmer as it caught refracted sunshine on its way down.  I grabbed for it but missed, and it was gone.  I still look for it every time I walk the beach, even though it may have swam to China by now, even though I realize my chance of finding it is quite remote, like one in a trillion trillion remote. But I still resent the metal detector guy poaching my search territory, and reducing ever so slightly my chance of success.

That being said, now I feel obliged (under the rules of the Retrospect) to concoct a way to tie my lost-ring episode to the contrails of the proffered prompt.  “Lost in translucence” may come close, rhetorically speaking, as it clings to the root and sound of the prompt, as the ring transitioned from the world of the real and visible to the underwater world of Neptune and Ariel and Moby Dick, a world whose sonorous language is unintelligible if translated into English.

...as the ring transitioned from the world of the real and visible to the underwater world of Neptune and Ariel and Moby Dick...

Bonus:  For those of you moved to hoard potato salad after reading my last entry, “Happy Birthday to Me,” don’t worry.  There’s plenty more from where that came from.  See pic below snapped this morning at local potato salad emporium: 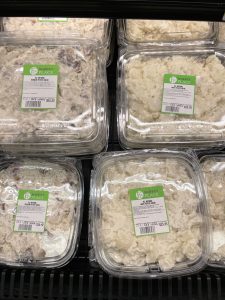 18 Responses to Lost in Translucence (a Patois)