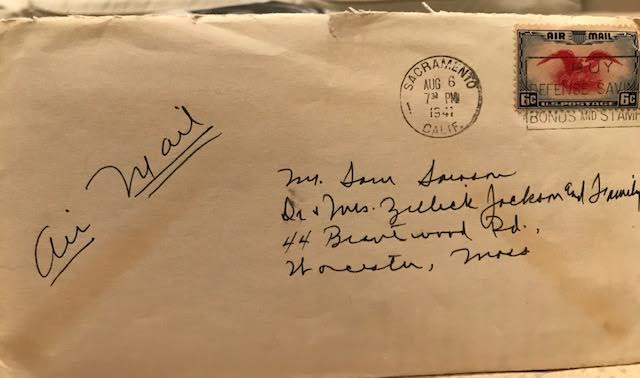 I loved getting mail. While email is immediate, there was something gratifying, even sensual to HOLDING mail in your hand. You could see someone’s penmanship (mine was horrid; I was a straight A student, but C’s in handwriting. It has only grown worse over the years and I still write letters). There was the anticipation of waiting for a response to a letter sent, none of this instantaneous nonsense in texting (and what does it imply if the person DOESN’T respond right away)? You couldn’t cyberbully or sext. Life was simpler. You had a chance to think about what you wanted to convey. And hopefully no regrets after you hit “send”.

I have some very old letters, passed along through family members. My Featured photo dates to 1941 (note the postmark: it is BEFORE Pearl Harbor – my father joined up while he was still eligible, before turning 26; he couldn’t wait to join. He loved the camaraderie of the Air Corps and stayed in touch with his commanding officer his whole life. I found his Christmas card list on his desk after he died and wrote to his CO for several years after. We had a nice correspondence). My father was in the Army Air Corps (there was no Air Force yet). This letter was sent to his father, staying with one of Dad’s married sisters in Worcester, MA. He writes to let everyone know that he is well (he was never sent overseas. He taught navigation and was stationed in Sacramento throughout the war). The letter was passed on to various other siblings, each added a note. Somehow, it made its way back to Dad and, since all the family knows that I am the unofficial family historian, it rests safely with me.

I also have letters from the sanatorium in St. Louis where my grandmother Lizzie (for whom I am named) lived for much of her life. The head doctor reports to the oldest sister; these also were passed around to the brothers and sisters. It was agreed to not tell her that my father had entered the military, so she wouldn’t worry. My grandmother was bipolar before there was any sort of medical treatment and was permanently institutionalized when my father was 12 years old. He was raised by that sister who wound up in Worcester. I cherish these letters. They give me some insight into the thought processes of the elders of my family. What happens to our digital legacy these days?

I wrote about searching for my favorite camp counselor last week. I still have a few letters she sent me, including the one above on tissue-paper thin airmail paper. It is lovely to be able to go back and see what she had to say to me, but also reminds me of volumes of letters my brother sent home during the summer and autumn of 1967 when he was a Hiatt Scholar, studying in Jerusalem during his Junior year at Brandeis. His trip was delayed by the 6-Day War in June of 1967. He was at the Wailing Wall during the first High Holidays and subsequent fall festivals celebrated there since the Second Temple was destroyed in 70 CE ( for all you non-Jewish readers, that stands for “Common Era”, since we don’t speak in terms of “the year of our Lord”, which is what “AD” stands for) and our ancestors were dispersed by the Romans. He wrote of watching the jubilant old men, dancing with the Torah on Simchas Torah. His words were vibrant and let us visualize the celebrations as if we were there.

My brother went on to be ordained as a rabbi, then receive a PhD in Judaic thought from Brown University. He is a brilliant scholar, speaker and author. My family eagerly gathered to share the letters he sent home on aerograms. They were revelations about what he was experiencing at an extraordinary period in Israel’s history. My mother saved those letters for years, but as she prepared to move into a life-care community near me in Greater Boston more than 25 years ago, my brother retrieved them, saving them for posterity. With all the awe and poetry of the written word, they beautifully capture a unique moment in time. 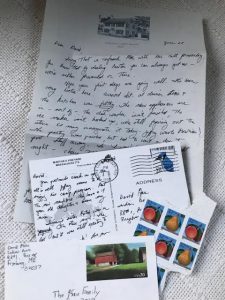 I recently came across a trove of correspondence between me and my older child from the late 1990s when he was away at summer camp. He had to send a letter home every week or he was not allowed to get his allowance. I retained more of my end of the of the correspondence. It got to the point where he would just send an empty envelope to us! He knew how to work the angles. There were no “forever” stamps then. They cost 32 cents.

I continue to think there are times when only something written will suffice. I always send a handwritten condolence note on personal, monogrammed stationary. Call me old fashioned, if you like. I was taught manners. I think it is important. The only time I do not use that note paper is if my note is too long to fit. I still write it long-hand (it is too personal to type on a computer), and will write a rough draft first, so I can think it through. Cannot edit or autocorrect my hand-written notes.

I also hand write thank-you notes, though I will tell my children that they may use a computer, as saying “thank you” is paramount. Getting those thank-you notes done for my younger child’s bar mitzvah was quite something, let me tell you. But they got done. They HAD to. That sort of failure was not an option in this household, even if he was barely functioning at that point in his life. (He was spectacular at his bar mitzvah; came through with flying colors, it was everything else in his life that gave us all pause.)

I still send out roughly 200 holiday cards with my “year in review” letter. I no longer put a personal note inside, but it goes in the mail. I don’t get nearly as many as I used to. Some are now emailed, others have just stopped sending them. I don’t know if they are too ill to send them, or just tired of the whole process, but I worry about some I didn’t hear from this year. 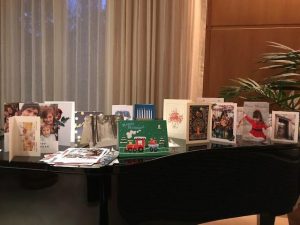 My piano used to be covered with cards. Certainly, the photo cards don’t stand up and are in the pile up front, but still, there is room for more.

I also continue to enjoy sending real birthday cards. Many folks now send ecards and those can be lovely. Indeed, Jacquie Lawson designs exquisite musical cards with a flourish and in such a way that you can reply to the sender, but I still think it is special to get something in the mail and see what personal greeting your friend or family member has written, what care the person has taken to select something that suits you, is the card humorous or heartfelt. Yes, I am decidedly old-fashioned that way. 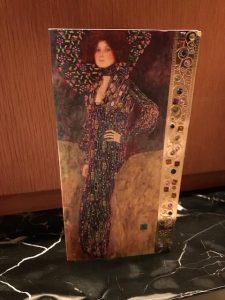 I received this one for my last birthday just a month ago. Inside, the sender said, “it helps to be painted by a master”. I agree! She has known me since 10th grade and knows that I love art, so it was a wonderful choice of cards and I loved receiving it.

I still think it’s fun to get something in the mail that isn’t a bill or an insurance notice.