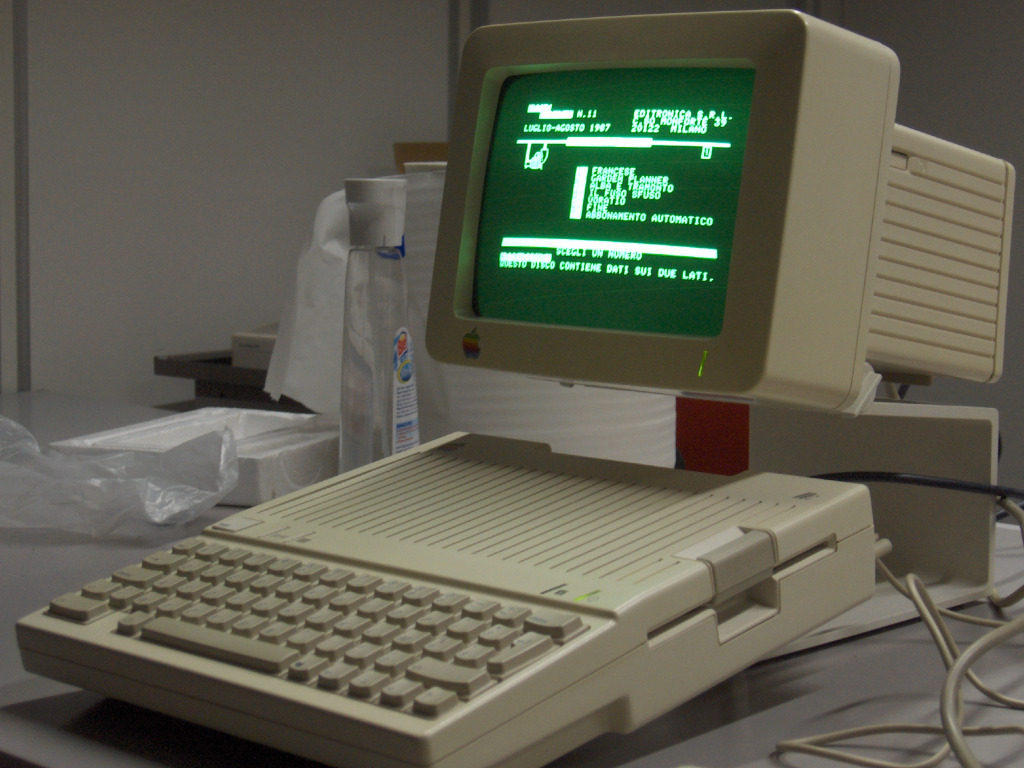 When my son turned thirteen back in 1984, we bought him an Apple IIc computer. I was both in awe of this machine and afraid of its presence in our home. It resided in the family room where I could keep a close eye on its influence on my son. It required a floppy disk to operate and emitted strange beeps and grinding sounds as greenish words flashed on the screen. My son adapted to it quickly. I watched from a distance, amazed by his mastery of this machine. Did I dare to try?

Disaster struck. My thesis had vanished. The computer had eaten it and refused to spit it out.

At the time, I had returned to graduate school to earn a Master’s degree in early childhood education. That meant I had to write papers. For a hunt and peck typist prone to spelling errors, that meant a lot of white-out and retyping. After closely observing my son, sometime in early 1985 I decided to use the computer to write my Master’s thesis. Wow. This was great. I got up every morning at 5:00 a.m. to work on it before my son and his younger sisters got up for school. But when I decided to print out the paper (remember those printers that used fan-folded paper with holes on the sides?) disaster struck. My thesis had vanished. The computer had eaten it and refused to spit it out.

Convinced it was in there somewhere, I packed up the computer and took it back to the local store where I had purchased it. This was the era before Apple Stores with Genius Bars, but surely the man who sold me this machine could find my thesis in there somewhere. I asked him to retrieve it from inside the computer. Please make my thesis open. When the owner asked me for my backup floppy disk, I had no idea what he was talking about. What’s a backup?

Once I realized the thesis was gone, I’ll confess that I cried. For a mother of three kids ages thirteen, ten, and seven who had just transitioned from teaching preschool to directing the program, while also finishing a Master’s degree at night, this was simply too much to bear. All of those hours writing at the crack of dawn had vanished somewhere into the bowels of that Apple IIc. Why had I trusted this ridiculous machine?

Thankfully, writing was a totally different process back in 1985. Research was done via actual books and articles, so my notes were still available. I also had a written outline. Painful as it was, I could reconstruct the document from these sources. Plus, my memory was much better 33 years ago, so once I started to rewrite it, much of what I had written the first time came back to me. In fact, I felt the second version was better than the first.

You would think that my first disastrous encounter with a computer would have sent me back to my old electric typewriter. Instead, I was more determined than ever to master the machine. There was something magical about being able to edit my work with ease. While my initial Apple experience was a bad first date, nevertheless, I persisted. Not only did I come to love that computer, but it was the start of a relationship that continues to this day.

Arthritis has made writing by hand a physical challenge.  Yet as I compose this post about my disastrous beginning with computers on my beloved Mac, I realize how important word processing has been to unlocking my love of writing.

I invite you to read my book Terribly Strange and Wonderfully Real and join n my Facebook community.