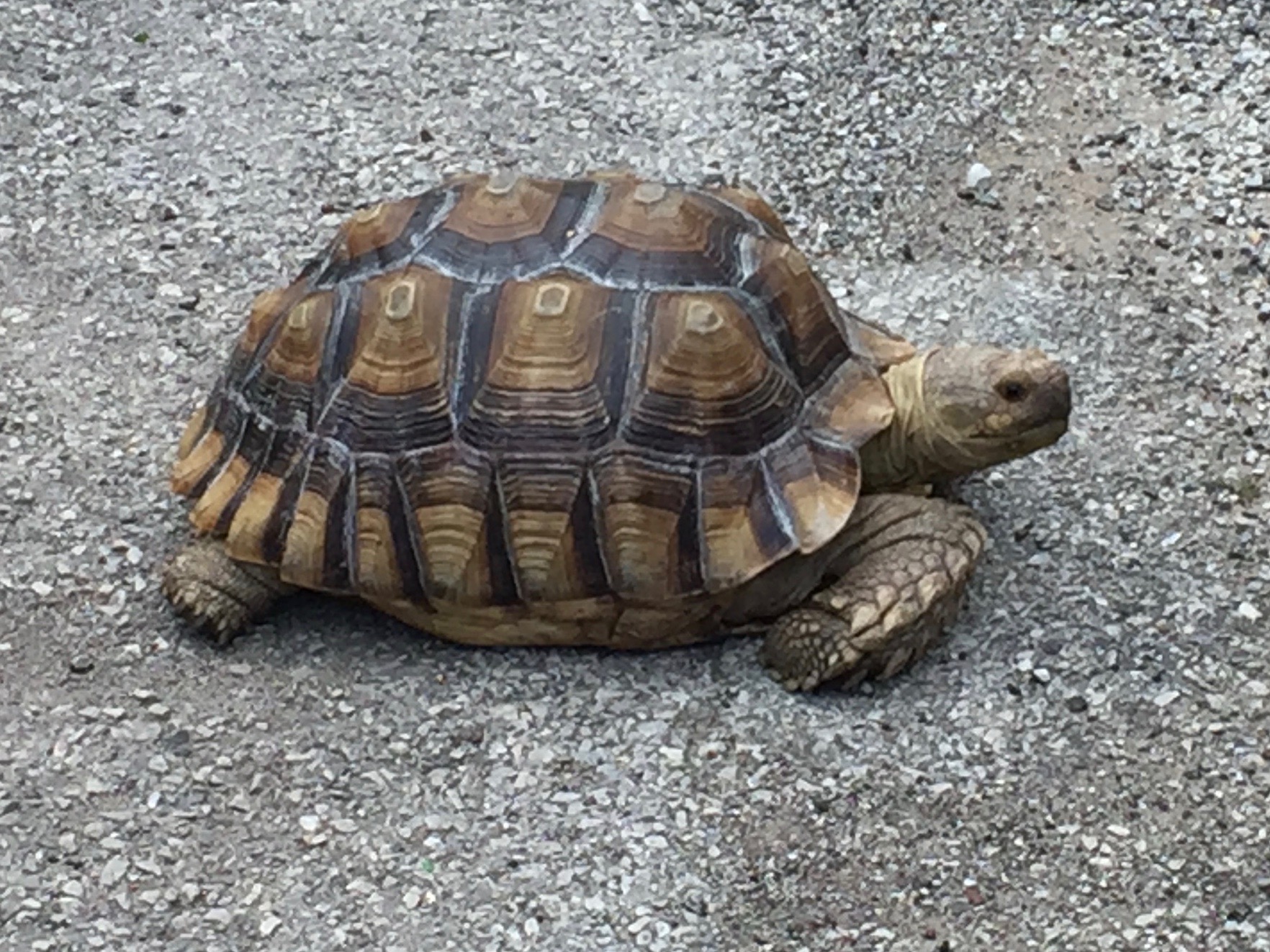 Sometimes, it takes a neighborhood to rescue a tortoise. I was driving down my alley when I spied an animal ambling along the entrance to my garage. Was it a possum out during the day? A wounded cat? I got out of my car to avoid hitting it and… it was a huge tortoise.

When we work together, there is a greater chance we can solve the problem, from rescuing a tortoise to tackling the huge issues that plague our neighborhoods and our country.

It slowly lumbered past my garage and stopped for a moment by my next-door neighbor’s fence. Now, she and I go back four decades as neighbors, and we have some history with attempting to rescue small birds that our cats used to catch back in the day when folks let their cats roam. But we had never encountered a critter of this magnitude.

My neighbor and I decided the best course of action was to capture the tortoise in my recycling bin before a car crushed it.  We called her husband, her visiting daughter and son-in-law, and their five-year-old son for reinforcements. Now we had five adults with differing opinions about how to get the tortoise into the container, and a small child worried that we might hurt it or it might hurt him. 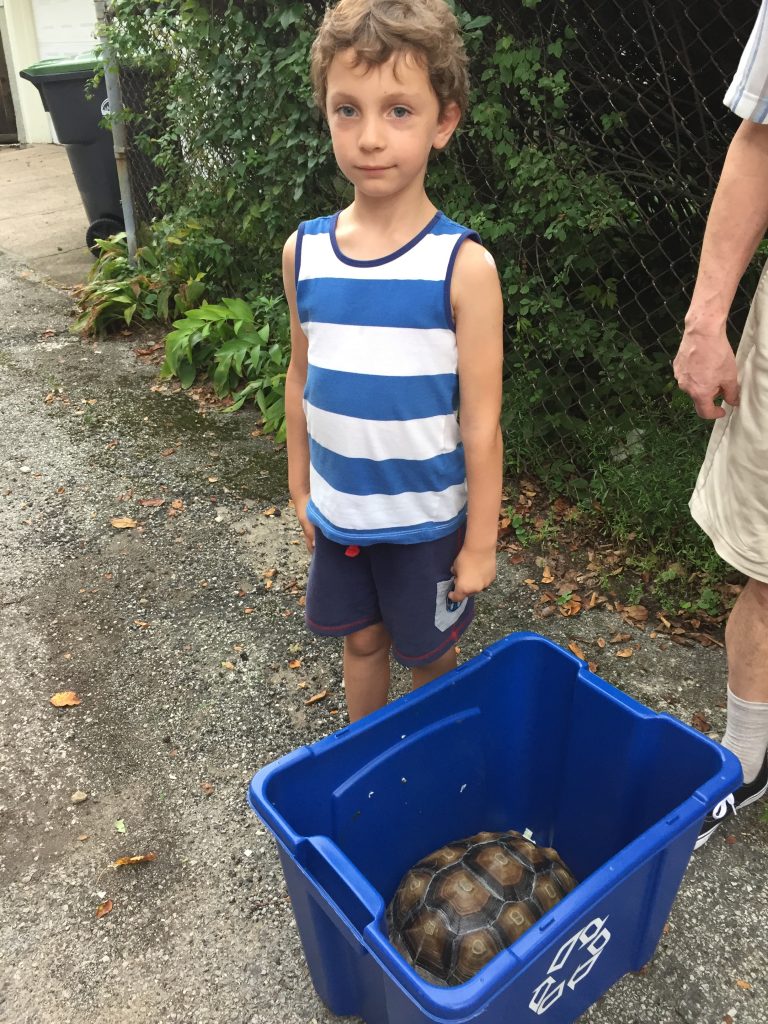 Turned out the creature loved the bagged salad I was planning to eat for dinner. Following a trail of fancy greens, it eagerly entered the bin that we had agreed to put on its side. Now we had to figure out how to get the tortoise, which was pretty much as big as the bin, to end up on the bottom, shell side up.  Somehow, the guys gently shook it into position, with the women and five-year-old cautioning them to be careful.

We called animal rescue, only to have a recorded voice tell us to leave a message. Then we tried the local animal shelter where we reached an actual human being who laughed as she told us they only dealt in cats and dogs. The local pet store owner was a bit more helpful.  She knew of this tortoise because it had escaped before, and other folks thought she might want to take it in. She declined but also confirmed it was someone’s pet.

Now we couldn’t just release it into the wild, so it took up residence on my neighbor’s back porch. I rushed to pick my granddaughter up from school and called my daughter to see if my grandchild could come back to my house to see the tortoise.

Here’s where the social media community entered the picture. My daughter thought the situation sounded familiar, like something she had seen on one of her Facebook group pages. So she searched Evanston Mommas using “tortoise,” and voila – we now knew for certain that our hard-shelled friend belonged to a neighbor at the other end of our block. This fact was confirmed when another neighbor’s son, who came to check out the tortoise, recognized it as his schoolmate’s pet. 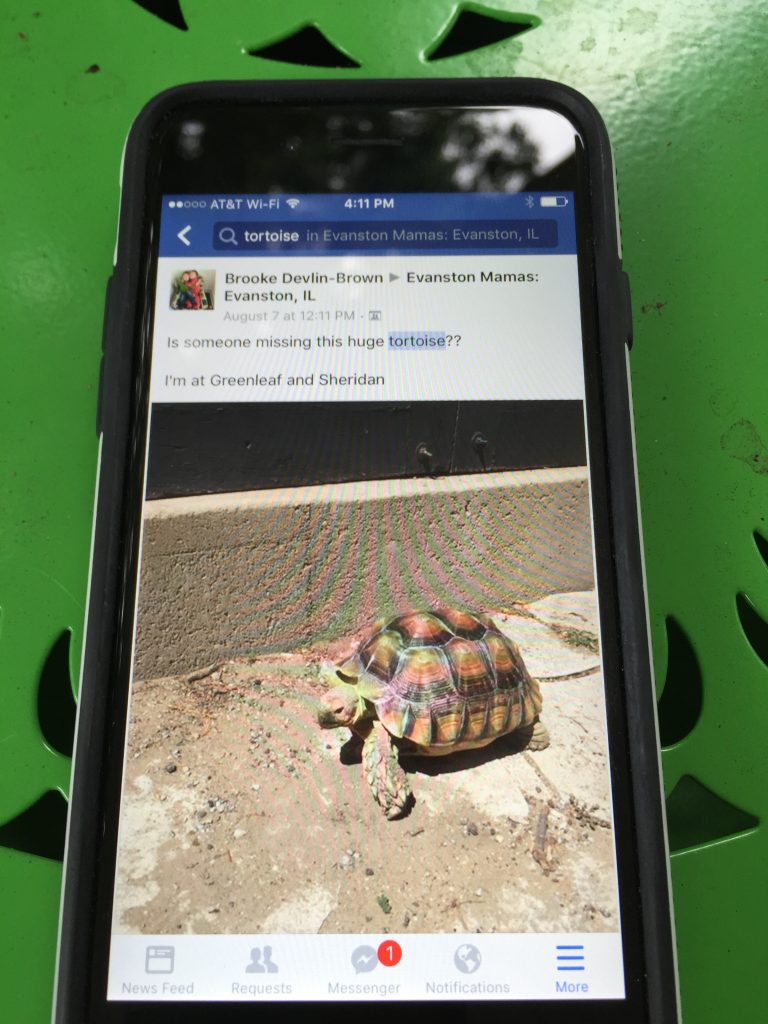 Next step – contact the owner. The Facebook post claimed her phone number was on the tortoise’s tummy, but no one was willing to flip this critter over. Although we now knew the owner’s name, we had no phone number or email, and no one appeared to be home when we tried her house. But my clever neighbor remembered that the owner was a real estate agent and had sold a home to a woman in her French club. That woman was home and able to provide contact information. Messages were left and eventually the tortoise was returned to its home safe and sound.

The more I thought about the lost tortoise, the more it confirmed my belief in the importance of neighbors forming caring communities, both physical and virtual. When we work together, even to help a lost tortoise, the power of connectivity is so much greater than anything we could do on our own. Villages can take all forms, but when people care enough, even about a lost pet, they demonstrate the power of community.

The saga of the tortoise felt like something the late Fred Rogers would have talked about on Mister Rogers’ Neighborhood. He believed we needed to share responsibility, see what needed to be done, and respond, even when a situation was not our problem.  Mr. Rogers told us,

“I hope you’re proud of yourself for the times you’ve said yes, when all it meant was extra work for you and was seemingly helpful only to someone else.”

Saying yes is the cornerstone of caring communities. When we work together, there is a greater chance we can solve the problem, from rescuing a tortoise to tackling the huge issues that plague our neighborhoods and our country. We are indeed stronger together.