Newspapers, the fourth estate, and galoots… by Charles Degelman
100
(144 Stories)

I come from a long line of galoots. They began American life in 1849 as farmers in Pennsylvania. They fought on the Union side during our first Civil War and then headed west to Placerville, California, where my great-great grandfather, John established a frontier business as a harness maker and soon opened a boot shop.

The boot maker’s son, my grandfather Charles wasn’t having any part of the galoot legacy. He was a writer and he was bound to be a newspaper man. He started out as a copy boy on Placerville’s only newspaper, worked his way up to reporter, and fled south, where he landed a job on the San Diego Union. He worked at the Union until he wrote his masterpiece — a grand lie in the tradition of the Great American Lie, as promulgated by Mark Twain, Ambrose Bierce, P.T. Barnum, and my grandfather.

Once the great hoax had been exposed, grandfather Charles fled to Butte, Montana, where he landed a job on the Butte Daily Bulletin during the titanic struggles between the copper barons and the copper miners. He covered the conditions in the mines and the miners’ efforts to organize though the I.W.W. — the International Workers of the World. The preamble to the IWW’s constitution began with the line “[t]he working class and the employing class have nothing in common.”

Charles’ employer, The Butte Daily Bulletin, was part of the fourth estate and proudly flew the following motto over its masthead: “We preach the class struggle in the interests of the workers as a class.” I suppose he, too, had become a galoot.

Eventually, my grandfather was forgiven for his earlier journalistic antics and returned to work in San Diego. He died of a stroke on his way to work, waiting for the trolley to take him to the newsroom.

My father John, although destined to become an electronics engineer and designer, also subscribed to the romance and importance of newspapers. After his parents died, he was taken under the wing of the Scripps family, known for having started the Scripps Institute, Scripps College, and fostered a chain of newspapers across America.

The crusty, lusty E.W. Scripps, who began United Press International (UPI), and had fired my grandfather after the great San Diego hoax, told my old man that only sissies go to college, so my father turned down a Merit Scholarship to MIT to become one of E.W.’s “boys, bright boys, from the classes that read my papers.”

E.W. Scripps shipped my father, John off to Seattle where he found that he was starting on the bottom rung of the Scripps ladder. My old man wasn’t climbing any corporate ladder. Perhaps he, too, existed as a galoot at heart.

When next seen, the Depression had begun, and my father was serving as “Sparks,” a marine radio operator on anything that floated, from Japanese tuna boats and tramp steamers to glorious passenger vessels on the American President Lines. He also doubled as an organizer for the National Maritime Union, another fourth estate outfit. 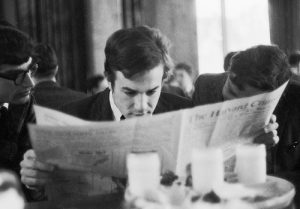 My own affair with newspapers began in while I was working with SDS. I took a job on the midnight shift at the Philadelphia Bulletin as a copy boy but they promoted me to copy writer. At night, that meant writing up obituaries. You may find this surprising, but it’s vitally important to get an obituary right, no mistakes, no Damon Runyan spin. People die and their survivors are sensitive.  I didn’t know the night editor wanted to massage me into a position where I could take on the shitty end of his work load.

Midnight shift at the Bulletin

Given the tenor of the times, anti-war, civil-rights had people marching, tear gas, the heat having a field day, and everybody busting out with resistance, rebellion, and love — I didn’t give a damn about the Philadelphia Bulletin. There was justice to be sought, a war to stop. I was headed down other roads, but I still ended up writing for the fourth estate, the media outside the media. So maybe I’m just a galoot after all.

16 Responses to Newspapers, the fourth estate, and galoots…