A female officiant? My family was skeptical.

Our wedding was a mix of the traditional and what we thought of then as the bold.  Both families happy with the union?  Check.  Only sibling/sister of the bride as matron of honor, only sibling/brother of groom as best man, check.  Theme color peach, check.  But instead of flowers, my bridesmaids carried sandalwood fans.  You wouldn’t believe how much this one, tiny step away from the cookbook was remarked upon. The breathless moment came when our female (female!!) officiant stepped up.  You’d think we were being married by an Elvis impersonator.  (Wink to John.) 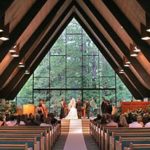 We were married in a classically beautiful chapel in Portola Valley, California that does a brisk business in weddings.  Thirty seven years later, my eldest son attended a friend’s wedding there. When I mentioned that that’s where his dad and I got married, you could have knocked him down with a feather.  Apparently the idea that we hadn’t gotten married prior to the stone age was a new one.

Modern weddings that cost the equivalent of a house down payment for the couple, or that take place at a remote destination requiring a car down payment by the participants, have become an industry unto themselves.  Too broke to even offer a full meal, after our pretty wedding we went to an open space on the Stanford campus for cake and champagne.  One of my favorite photographs from the day doesn’t even include my loving groom.  It’s me, surrounded by all his (mostly somewhat younger) fraternity brothers who came to celebrate with us. Raising their glasses, laughing and toasting as the first of their comrades fell to domesticity.  Many of them remain in our closest circle to this day.

5 Responses to Not So Very Bold