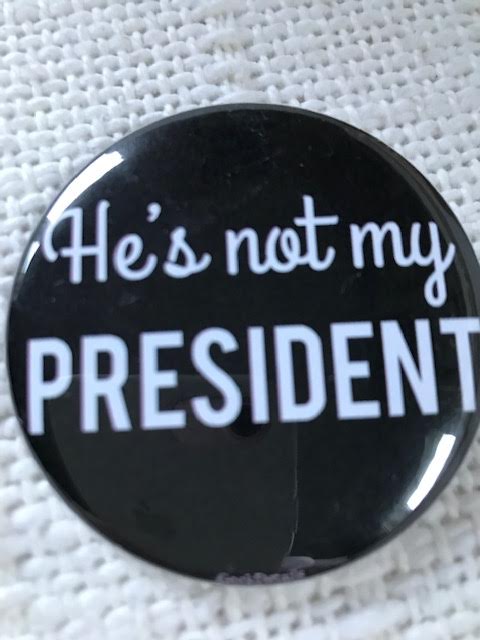 The last time I wrote to this prompt was November 7, 2016, the day before our world turned upside down. In that essay, Born Blue, I described what a proud liberal Democrat I was. And I remain so, though these last two years have sorely tried my faith in humanity.

My husband went to bed at 11:15pm on election night, when the trend was clear, but before the election was called. I stayed up for several more hours, watching with horror as the returns confirmed our worst fears. Both our children share our liberal views. At that moment, our son in London texted. “I know I don’t call often enough. I love you both and will call tomorrow.” It felt like the Apocalypse and that was the tone of his message. Our other child, living in the Bay Area of CA, sat with a suicidal friend and texted suicide hot line numbers all night. It was a grim night in our family, as opposed to eight years earlier when we spoke through tears of joy.

My husband has stopped watching the humor/commentary shows. We don’t watch any cable TV. We get our news from CBS, I watch Meet The Press. We read The Boston Globe, parts of The New York Times, the Wall Street Journal, and from Facebook, I see articles from The Atlantic and The Washington Post. We are mainstream media people. I listen to NPR constantly while driving. I totaled my car a few weeks ago during a discussion on Brett Kavanaugh.

My husband constantly says, “Never underestimate the stupidity of the American people” (with a nod to H. L. Mencken). I listen to some of these people on NPR; heard one interviewed just the other day about the opioid crisis. Her son became addicted to pain killers after a back injury. He stole money from her. Her father died, she was executrix of her father’s estate, but her son knew the PIN code to his bank account and drained it. She lived in Florida and couldn’t get him help there. She voted for Trump and still likes him, thinks he’s “getting things done” (wasn’t specific about what those things are), but wishes he’d get off Twitter. She blames local politicians for not funding better health care (and sees no correlation between state government and all the national rhetoric about repealing Obamacare and clearly does not understand that many states with Republican governors didn’t fund the Medicaid expansion, so did not fund Obamacare properly. Where it was funded, it is working well). She had to move to a different state to get her son into rehab. She said he is clean now and they have a strong relationship. She doesn’t understand how fragile her son’s sobriety is, or how easily is could all come apart if the health care is stripped as Republicans strive to do.

The “tax reform” was a cynical sop to large Republican donors and businesses. Regular folks and low income people got little or no benefit, but it created a huge deficit. Now the Republicans in Congress claim the only way to stem the rising deficit is to cut the social benefits that all retirees depend on (yes, even those who voted for the loud Orange One like their benefits, if they thought about it for two seconds).

Attacks on the press, lying about everything, constantly…that is our president’s stock in trade. Cozying up to strong men and dictators around the world. When we travel to Europe, we are asked to explain what has happened in this country, once the Land of Liberty and the great example for the rest of the world. We shake our heads in exasperation. We cannot explain or justify what is happening. How can anyone separate mothers from their children, some too young to talk, and put the children in cages? It is barbaric.

Words have consequences, as we saw too plainly just days ago with the pipe bombs sent to Democratic leaders and their supporters, including a past president, and the unspeakable mass shootings at the synagogue in Pittsburgh by a vicious anti-Semite. These deranged men (and countless others over the past two years…almost always white, American-born) use the language Trump uses at his Nurenburg-style rallies (immigrants are now invaders). Our Orange Monster is firing up the bread and circus and all the crazies are heeding the dog whistles to fear, hate or kill “the other”. No one is welcome in Trump’s America anymore unless you are white and Christian.

His latest is to overturn the Constitution with a stroke of a pen and say that children born in this country of foreign-born parents are not US-born citizens (or is it just born to illegal immigrant parents; the craziness keeps changing), which would mean, technically, he wouldn’t be a citizen (maybe someone told him that, hence he walked back his first remarks) and therefore, couldn’t be president (only US- born citizens can be president…sorry, Donny – go back to your mother’s native Scotland, if they’ll take you).

He believes in crazy conspiracies, always thinks he is right, lies when what he’s saying is verifiably false, and his base just loves it. Fake news, he shouts. The free press is the enemy of the people and reporters are murdered by our allies while the Orange Monster says arms sales are more important. Nero fiddles while Rome burns.

Whatever he’s done is the biggest and the best. Now he wants to do away with transgenders. As if everything else he’s done isn’t horrible enough, I have a transgender daughter. He is attacking me and my family personally. I have studied how Hitler came to power, freely elected during a time of upheaval and unrest, while Germany had not recovered from World War I and there was desperation and poverty. The Germans looked to a strong man to save them. Shame on those in the US for doing the same.

Recently, I attended a lovely wedding and was seated next to a relative of the bride during dinner. He lives in the Detroit area, so it was thought we’d have lots to talk about. He is also the youngest survivor of Auschwitz, now is an elderly gentleman. He was a charming dinner companion. We compared notes about Greater Detroit, though I have been gone for more than four decades. He told me much of his story (two of his daughters sat across from us). Then he brought up politics. He told me he votes for both Democrats and Republicans, depending on the person, but proudly voted for Trump this time. He saw my face crumple. We didn’t want to fight with one another. He told me he liked what Trump stood for, “America first” (did he not realize this was the term used in the 1930s by isolationists who wanted to keep us out of WWII?), and closed borders. He is grateful for all that America has done for him, an immigrant landing here in 1946, who amassed a fortune, out of the horror of the concentration camp. His mother and her sisters survived, but he witnessed the worst anyone could see. I carefully pointed out to him that I have friends from New York who know Trump personally and will NOT do business with him because he a liar and dishonest. This didn’t bother my new friend. He told me that he saw the kapos, the Jews in the camps who were corrupt and policed the other Jews so they could have a little power and a few scraps more to eat. He said he had seen the worst of the worst, so having a corrupt man in the White House didn’t bother him. He liked the idea of closed borders. “America is the best country in the world. Of course everyone wants to come here. We can’t let them come in.” I reflected on that for a few moments, then thought, “What would have happened if that was the sentiment in 1946 when you came to this country?” But we were at a nice event and I didn’t want to point out his hypocrisy. One can’t reason with someone whose mind is made up.

That is what is so frightening about the current climate in the US today. There is no reason, no thought, education is evil, people feel they are being talked down to, you can’t change minds with facts, there are no thought leaders who are respected. We seem headed down a dark path, perhaps a revolution or new civil war. The less fortunate vote against their best interests because Trump is entertaining and they like his bluster and they want as many guns as they can lay their hands on. The rich like him because he protects their interests. The Evangelicals put up with him because they want to do away with abortion. It doesn’t matter that the law of the land was decided in 1973. It doesn’t matter that they might be stepping on MY rights.

A college friend recently posted this on Facebook: “This morning I and several friends were having our bi-weekly coffee when one of our number made a frightening observation. He is a refugee from Nazi-occupied Austria who was rescued via the kinder transport. He pointed out that he is an immigrant to the US.

“He opened the topic by saying, ‘This feels exactly like 1938.’ He went on to describe how trump’s language and actions (especially that directed toward immigration) exactly reflects hitler’s/goebbels’ talk and actions of that era.

“Friends, be afraid; be very afraid and VOTE THE FEAR AWAY.”

Governing for the good of the country is not what Trump has in mind. He put people in his Cabinet whose express purpose is to undermine their positions and the corruption is the worst in history since the Teapot Dome Scandal of the Harding administration which came just before the Great Depression. Pay down your debt and be careful of the stock market. We are headed for a fall.

Tikkun olam; to repair the world. That is a main precept of the Jewish religion which is why social justice plays such a huge part in our lives. We don’t see that coming from Trump and his minions now (which is why I find it surprising that he has a strong Jewish following). Let us take up this work and be good to one another, listen to one another, learn from one another. We are all brothers and sisters and need to learn to live together in this country and this world. It is the only way forward. 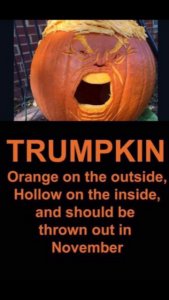 8 Responses to On the Eve of Destruction