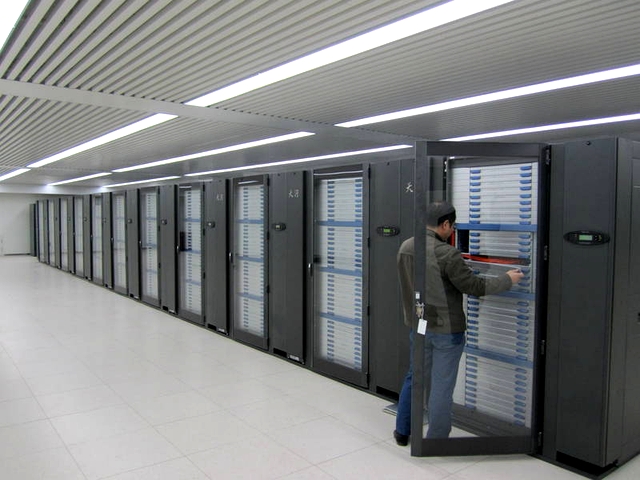 Like any compelling story about recipes, this one starts in the DP Department.  Remember “DP”? In the days before it became IT?  In the realm of main frames?  And FORTRAN and COBOL?  Me neither.  Except for one experience.  Trust me; this is recipe-relevant.

(Mom) was drawn to challenging recipes.  With mixed results.  Her sardine pie became the stuff of family legend, firmly anchoring the bottom end of the results scale.

In 1975 my employer thought I would benefit from some instruction in systems analysis.  We were attempting to automate several processes that seemed to defy automation, and I foolishly observed one day that there just had to be an automated solution.  So, I was sent off on a five-day program at Aetna to learn some basics.

At the outset the instructor talked to us (there were just two of us, as I recall) about what computers do.  He made the point that computers run programs, of course, and that programs were simply series of steps.  The computer, he said, can do only two things: execute a command and move to the next command.  So, he posed the question: what’s the simplest example of a “program”?  We chumps were stumped.  Why, a recipe, he said. (Told ya.)

Obviously that experience has remained in my day-to-day consciousness, my RAM, if you will.  (I did pay attention during the course.)  And it is so true.  And useful.  There is no food preparation, even the most exquisite, sophisticated and complicated concoction, whose recipe is other than a series of steps.  That fundamental tidbit made me feel that I could do anything, from a culinary perspective.  Didn’t say I could do it well, necessarily, but do it?  Yes, absolutely.

So, recipes.  Of late I have made good use of the internet to find recipes.  Recall my story, “Hot Hot Hot” (the Super Bowl prompt).  My chili started with an online recipe.  I have quite a collection now, primarily for a slow cooker.  And all quite good, at least to my taste.  But when I think of real recipes I think of family recipes.

It starts with the small floral print metal box that my mom kept her recipes in. She typed the recipes on the backs of 3×5 cards, using her trusty Royal manual typewriter.  The box had seen better days, and many of the recipes also showed signs of some aging.  It might give an impression that Mom was carrying on a long family tradition.  Not so.

My mom was a native Italian, emigrating with her family in 1916.  Alas, she was only seven when her mother died, and despite living with an aunt and her family outside of Pittsburgh, she never learned traditional Italian cooking the way most natives do.  After she married and began establishing a household she plunged forward to learn.  She was drawn to challenging recipes.  With mixed results.  Her sardine pie became the stuff of family legend, firmly anchoring the bottom end of the results scale.

In time she became a good cook; her meals were always tasty but nothing fancy.  Her forte was baking.  And most of the recipes in that little box were baked goods.  I mentioned the sour cream chocolate cake in my Flagrant Flashbacks story (The (Very) Deep State).  I also remember a tiered Christmas tree cake she used to make from a recipe she found in Holiday magazine in 1952.  As I discovered, it’s a bit involved – it’s basically a wedding cake formulation – but worth it.  I blew away a Yuletide dinner party with it.  But it’s two other family recipes that, well, take the cake.

The first we (my sisters and I) know as “Hershey tops”.  This is an oatmeal bar cookie that’s topped with melted Hershey’s chocolate and chopped nuts.  An absolute Christmas cookie must.  My sister Barbara has mom’s original recipe card, noteworthy because Mom added the helpful addendum, “(10¢ now)”, to the required three Hershey bar ingredient.  Goes to show how old the recipe is.

The second is the recipe my sisters and I know by the name my Mom used for it: “Gramma’s Brownies”.  It’s a terrific recipe.  I never really knew my grandmother (my Dad’s mother): she died when I was two.  I’m told that I played on her bed, to her amusement, in her final months.  I’m also told she was quite the chocoholic.  Clearly a genetic trait, given my Dad’s and my liking for chocolate.  The brownies were – and are – delicious.  And quite simple.  But they aren’t brownies.  At least in name.  My Dad knew them by his mom’s name for them: Chocolate Indians.  Don’t know the origin.  But a good cookie by any other name will taste as sweet.  And the associated memories are sweeter still. 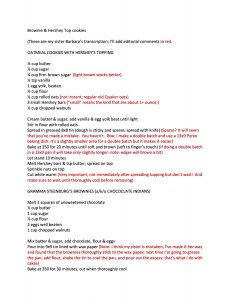 21 Responses to One Step at a Time