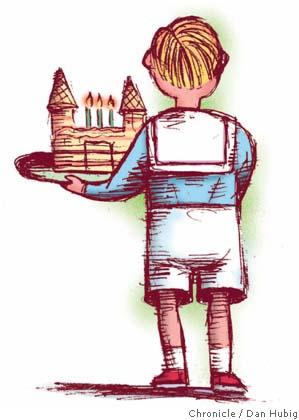 It’s been over thirty years since I spent an evening awkwardly curled up on the couch, sniffling through a movie based on Virginia Woolf’s To the Lighthouse. Pregnant with my third child, my heart was captured by 6-year-old James, a blonde charmer in a sailor suit. The last of six children, James Ramsay had a special place in his mother’s heart: he was “the most gifted and sensitive of her children.” James wanted desperately to go to the lighthouse, enticingly visible yet painfully distant from the Ramsay’s summer home–a daylong trip that would have been a very big adventure for such a small boy.  In the story, young James does not get to the lighthouse; not until he is a surly sixteen year-old and far beyond his childhood longing does the day finally arrive. I’m not sure why I reacted to the movie with such strong sentiment, barely able to stop the flood of tears– maybe it was hormones, or maybe it was because I knew I was carrying a boy, my last child, just like Mrs. Ramsay’s James, and watching the unraveling of his innocence was almost more than I could bear.

It was more than just a cake; it was an architectural marvel.

We named our son James, partly because of Woolf’s moving story. He was born blond, like James Ramsay, and had big blue questioning eyes. My James was a quiet observer. We would catch him staring intently at the white-on-white chevron pattern of our couch. It was a bit odd, but we put his little infant seat near the couch so he could stare to his heart’s content. As he got older, James was fascinated with many things, especially letters and words. He read his birthday cards out loud at his fourth birthday party. He has always been happy around books and, like me, rarely goes anywhere without something to read.

When James was small, we had a few children’s cookbooks.  Every now and again we would do a baking or a cooking project together–snickerdoodles were a big hit with all three kids. At a garage sale, I found a true classic: Betty Crocker’s  Boys and Girls Cook Book, written circa 1957. It was fun to read and to look at. The drawings were priceless, and the recipes hark back to my childhood favorites, especially cinnamon toast, pigs in blankets, jam-filled thumbprint cookies, and macaroni and cheese. But James was entranced by the Enchanted Castle Cake. 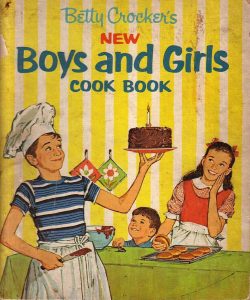 It was more than just a cake; it was an architectural marvel.  The castle was constructed by cleverly sawing a 9-x-13 inch cake (yellow, from a mix) into smaller squares, rectangles and arches, then artfully stacking and arranging the pieces, applying frosting (also from a mix), and decorating the whole affair with marshmallows, chocolate, inverted ice cream cones and toothpicks to create an impressive castle with flags, turrets, and a drawbridge. 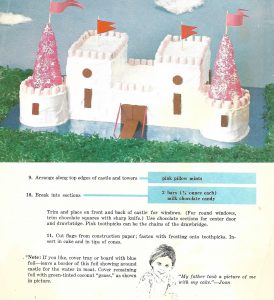 James really, really wanted to make that castle cake, but there was always something more pressing to do. Promises were made to make it some day, but that day never came.

In October 1991, when James was 5, our house burned to the ground in the Oakland hills fire. Although my husband thought to rescue our big binder of hand-written recipes, the Boys and Girls Cook Book was lost, along with everything else. I don’t think I understood how much this book was missed until James started talking about the castle cake again. How would I ever find a copy of this book, long out of print? As it turned out, a neighbor whose house didn’t burn made it her job to help the rest of us replace our favorite cookbooks. To those of us starting all over, having our favorite recipes again allowed us to start putting our lives back together. In an unfamiliar rental house, an unfamiliar neighborhood, and a different kitchen, being able to cook family favorites was a blessing.

I gave up trying to replace my vintage Betty Crocker, but then Paula, the neighbor with foodie connections, put me in touch with a man from General Mills, Betty Crocker’s parent company.  We talked about the Boys and Girls Cook Book, and I explained my 5-year-old son’s fascination with the Enchanted Castle Cake. Oh yes, he was familiar with the castle cake. Yes, he had a copy of the cookbook. No, I couldn’t have it. But he offered to copy the recipe and illustrations and send it to me, which he did, and hope was restored in James’s heart. I confess I did not jump right up and bake the cake. It was still a huge hassle, and besides, I didn’t have anything to bake with yet. In fact, it was nearly a year before I felt like baking anything.

There is a happy ending to our story, however. One summer day, when James was 12, we made the castle cake. Our cake had a definite starboard list to it, and I doubt the turrets would have survived even a minor earthquake. We took some license and liberally doused the whole structure with multi-colored sprinkles–it was a party castle. We did all of it together: placing the marshmallows like puffy luminaria atop the castle walls, frosting the upside-down ice cream cones, creating waves of blue icing (for the moat, of course), placing jaunty little paper flags into the tops of the tilted towers–the whole shebang. Our special touch: chocolate dorsal fins placed menacingly in the moat. I took several pictures, for it was a sight to behold. If, after all those years, it didn’t meet his expectations, James never let on.

James is now a father himself, no longer that dreamy bookish 5-year-old or the not-yet-teen who could still have fun baking with his mom. No matter how much time goes by though, we will always share the sweet memory of the day we made the Castle Cake.

A version of this essay was published in the San Francisco Chronicle many years ago. The little boy with the castle cake is the illustration that accompanied the  published article. So perfect for this piece. A friend gave me her well-used copy of the cookbook after she saw the article. It’s falling apart, but I’m hanging on to it in case some other little boy or girl wants to make the Enchanted Castle Cake one day.

18 Responses to The Enchanted Castle Cake