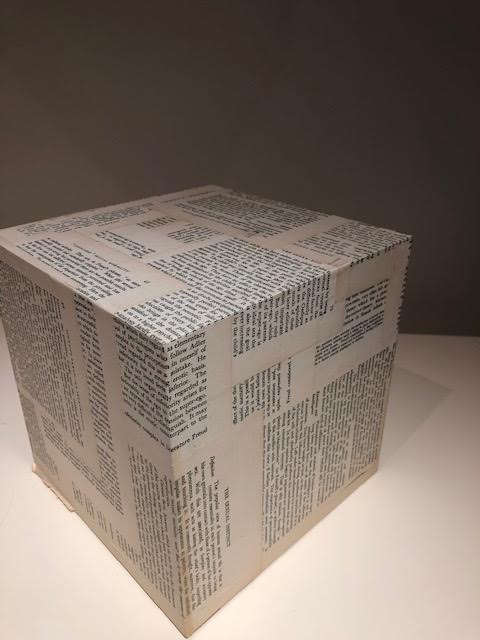 Through our years as active art collectors, we attended many art auctions, but rarely bought anything. An exception were the two works we bought from the Mass College of Art in 1994 done by celebrities that we hang in our bathroom, just for fun. We both love Gregory Peck and Steve Martin, so these were “no-brainers” for us. They were not expensive and a great way to support the school. 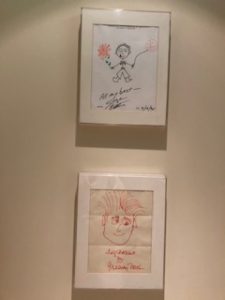 In 1995, with a vibrant committee, I helped start a group called the “Young Patrons of the Rose”. We developed a wonderful three-part program; a tour of the museum followed by dinner, a visit to a collector’s home, and a visit to an artist’s studio in or around the Boston area. We had the formula down and the program was a great success. The Chair of the Rose was deeply involved and suggested we plan a fundraiser – an art auction.

We put together a great committee, headed up by the Chair’s step-daughter. Including the Brandeis Development Officer involved with the arts, there were 11 members of the committee, which began in 1999. I brought on the director of one of the leading galleries in Boston. She connected us with her stable of huge artists.

We met at least monthly, frequently more often. We batted around ideas and quickly came up with a winner – making boxes – 8″ wooden cubes, with the top left off, to give to an invited group of artists to be auctioned off, with the top-tier (10 of them, including Sol LeWitt, Shellbourne Thurber, Michael Mazur, Annette Lemieux, Philip Taaffe, who had just had a solo show at the Rose, and a few other notable local artists) auctioned live, the rest going silent from bid sheets. We put together a wish-list of artists and assignments to committee members to contact the various artists we wanted to make us the boxes to be auctioned off.

We called the event “Out of the Box”. We set the date of the event for Sunday, November 5, 2000. It had to be at a time when the Rose galleries would be empty (there was no Lois Foster wing at the time), as we took over the entire building to display the boxes and bid sheets. We erected a tent on the lawn in front of the museum (where the Chris Burden “Light of Reason” sculpture now resides, erected in 2014) for dining after the silent auction.

I was still an active collector at the time and knew all the top galleries in Boston, so approached many and got some of the top artists in Boston to participate. It was only a short time since the long-time and well-respected Rose director, Carl Belz, had left. I remained in touch with him. Most of the area artists knew him well. I used that relationship to leverage my “ask”. Many of these artists had work in the Rose collection, or I had bought work from the galleries I contacted.

Once we had all the boxes handed out and knew who all the participating artists would be, I was assigned the role of “artist wrangler”. I was in contact with the entire list of artists to make sure they completed and returned their finished works before the auction so we had time to inventory, price and our curator (the current Rose curator at the time) could figure out the installation.

We asked 66 people to make art work (including the president of the university and some of our committee members). I had a spreadsheet of who had picked up the boxes, when were they returned, how often I called them, etc. This was before the days of essential use of email, or even cellphones. I had studio phone numbers, addresses; people came in person to pick up and drop off boxes. I tracked it all (and still have the worksheets to prove it).

Others on the committee worked on catering details (cold food given out in boxes, of course), invitations, lists of people to invite, etc. Putting on any sort of a fundraiser is a huge endeavor. Reaching out to people who will spend money on art boxes is a specific crowd, but our “Young Patrons of the Rose” committee had been together for some years now and we had a built-in audience. And of course, we tapped the broader Rose membership and the Boston-area art world writ large. We had excellent artists doing interesting work. We spent 18 months putting it all together.

The curator put together a fantastic-looking show. Other members of the committee put the bid-sheets together and had the team ready to check out the winning bidders and wrap up the boxes efficiently for the trip home (at least they were relatively small and not too fragile). Through friends in the auction world, a professional auctioneer donated his services for the live auction. Dan and I bought two tables to the event to help ensure good turn out and some interesting people who could talk up what was valuable.

Of course it was a rainy, blustery November night. Inside the museum it didn’t matter. Getting under the tent…well, we all had fun. Just before the event was due to begin, we realized we needed someone to make announcements “hawking” what was available in each room, urging people to buy, and most of all, closing each room (there were three) where the silent auction took place. We looked at each. Yes, I was the theater person who could speak the loudest. I volunteered for the assignment and spent the evening hollering from the center of each room (upstairs and downstairs in the main Rose building, then in over the the Lee wing). We closed each room 15 minutes apart from the next. Much to my delight, Dan got into the spirit of things and bought one box from the silent auction, a lovely Jim Stroud black on black work. He is mostly known for his print making, but this a subtle beauty. 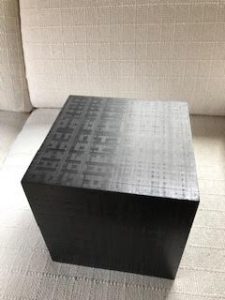 We trudged through the inclement weather to the tent for some food (admittedly, the low point of the evening), libation, and the live auction. Dan got more excited by bidding wars going on for some of the well-know artists. The Sol LeWitt box, which he had de-constructed, was purchased by a Rose Board member and one of the largest contemporary art collectors in the US (he was fondly reminiscing about it to me earlier this year – it remains on his coffee table today). Others went for large sums of money. Dan got excited about the Shellbourne Thurber, a conceptual artist, whose work we followed at the Krakow Gallery in Boston. She had covered her box with pages from Freud and inside, placed a mechanical toy, turned on by a switch underneath the box. When activated, the toy rattled the box and said, “Help me, help me! Will you let me out of here?!” We loved it and paid a goodly sum of money for it. Dan hosted one table, I hosted the other. Our friends cheered us on, as Dan bid for the box. It was a heady experience.

In my file, I find a letter, written the day after the auction, thanking all the artists for their participation in our successful event. Of course, we found as many sponsors as we could to help underwrite it. We charged to attend, but the sale of the boxes was what made us money, as we had lots of expenses associated with the effort. I’m sure just renting the tent was very costly. In all, I believe we made a profit of about $40,000. The proceeds were used to underwrite the first show in the new Lois Foster Gallery, which opened in September, 2001, the Rose’s 40th anniversary year.

On a recent shiva call, I was in the home of one of my fellow committee members. Highlighted on shelves surrounding a fireplace in a condo full of exceptional artwork were two boxes from that evening. Another world-class art collector and I commented on them. She told me she still has her Gerry Bergstein, a box bought during the live auction. It is good to know more than two decades later, these boxes still have pride of place in the world.

14 Responses to Out of the Box