Prompted By Auctions and Raffles
4 comments.

These days, when memory serves she feeds me gristle and bones. But sometimes I scrape off a scrap of meat or crack a rib to get at the marrow. Marrow can be bitter, especially when it reminds me what an ethical poser I was, and still can be.

A rigged contest. A hypocritical winner?

On a winter night in rural Idaho in 1978, my wife and I decided to drive the 10 miles into town for the record shop’s “Midnight Madness” sale. Cate wore her earth-toned wool poncho. Strapped to her chest was our son, only about six months old, asleep. He was in an early model of a corduroy pouch called a Snugli. The straps were corduroy too, unfortunately. They bunched up, and adjusting them in less than 15 minutes was impossible.

I parked on Main Street. Cate had to climb over the berm of snow and ice chunks thrown up by the snowplow. We could already hear music from the shop, which was the only business open at that hour. Just inside, relaxing from the cold outdoors, we learned there would soon be a drawing for a fancy stereo system. We each filled out a slip and dropped it in the box.

As we browsed the records, we had to navigate through 20 or so teenagers who were milling around as they waited for the drawing. We bought an album or two. Outside, on the way back to our VW Squareback, we heard a call behind us. One of the store’s employees, a fellow twenty-something but at the younger end, caught up with us and said we had won the stereo!

The set was a class above the stereo back in our cabin; it had big speakers, a built-in radio, and, best of all, a double tape deck that would enable us not only to play cassette tapes but also to copy music onto blank tapes. The good news was soon dampened by my suspicion, however. I asked how they could have drawn the winner only seconds after we had left the shop.

“Oh,” he said. “Well, we didn’t actually draw yet. We’ll fake it later. We just liked your looks. You know — longhairs with a kid. And you actually bought something, instead of just hanging out.”

I told him we couldn’t accept the prize under these circumstances. It wouldn’t be fair to the other entrants, who were expecting an honest contest, not a rigged one, etc., etc. He started to walk away.

“Wait!” Cate cried. “Whose name is on that slip of paper in your hand?”

He and his partner carried the big box out to our car. It just fit. We put the set together the next day and enjoyed it immensely for many years thereafter. 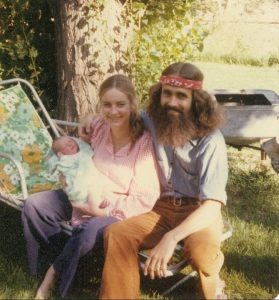