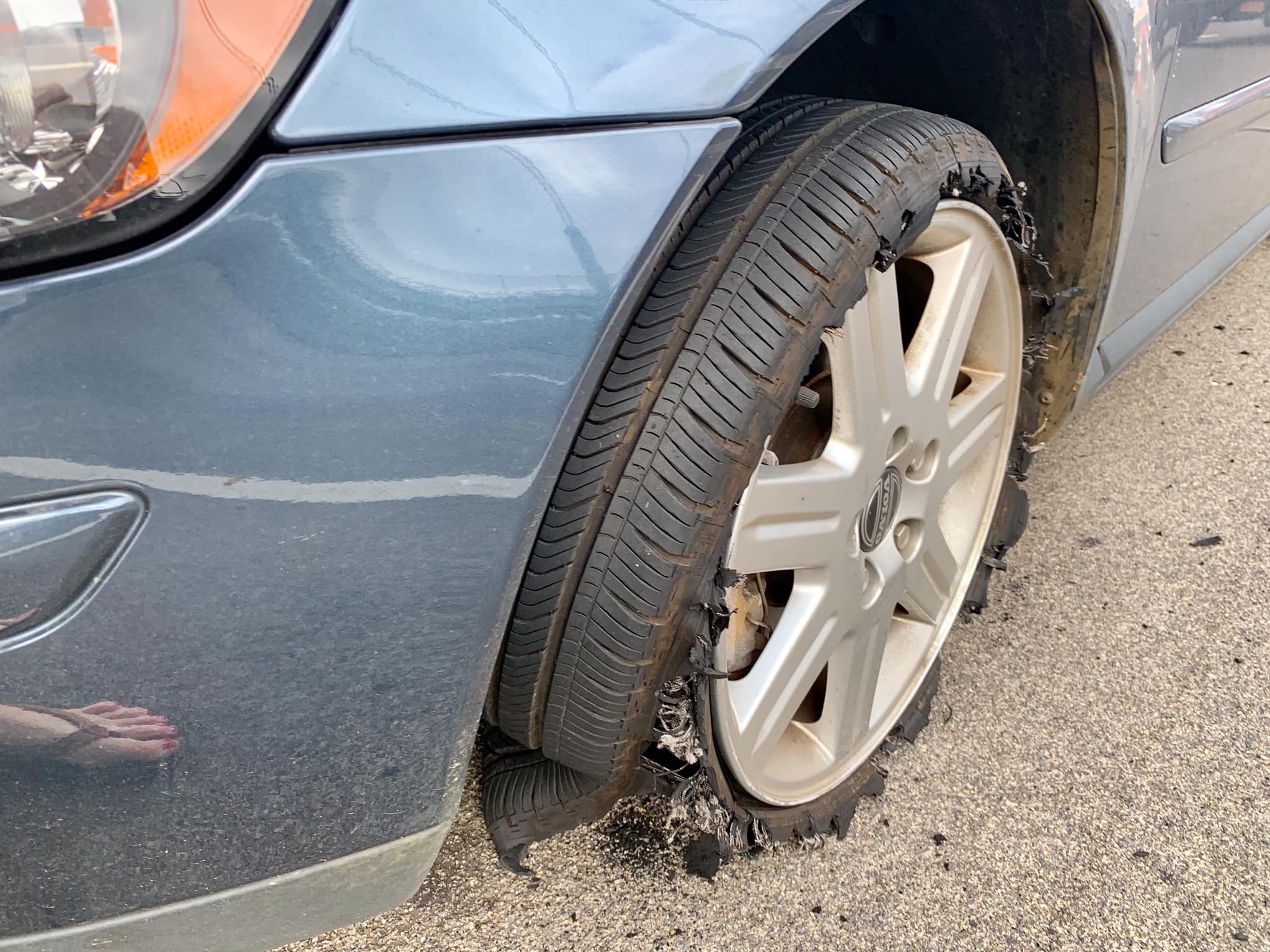 My nephew, a New York actor who is currently appearing in Fiddler on the Roof in Yiddish, recently posted this story on his facebook page. I loved it so much that I wanted to share it here. With his permission, I am reprinting it exactly as he wrote it, along with one of his photos of the car and tire.

Here’s a story for you: Dorie and I decided to spend Monday, my day off from Fiddler on the Roof, at Splish Splash water park on Long Island. We take my parents’ car and leave from the Upper East Side around 9:30. About ten minutes into our drive, the car starts shaking violently. Violently enough that we pull over ON THE TRIBORO BRIDGE. Fortunately the rightmost lane was coned off. With cars whizzing by us, Dorie gets out of the car to see that our front left tire is flat. Well, not so much flat as completely shredded. (Speculation: the tire was slashed by the owner of the SUV that was parked in a tight spot behind me the night before.)

Around 10:10 — we’ve now been on the side of the bridge for more than twenty minutes — a Bridge and Tunnel Transit Authority car drives up next to us and offers to help. She calls a truck to tow us off the bridge. The truck arrives and as the guys were talking to us about what we were going to do, another truck drives by and knocks off the tow truck’s sideview mirror. We are now causing a major traffic jam. A little after 11:00 — more than an hour after we first pulled over — we finally get towed off the bridge and into Queens, where the workers are kind enough to change our garbage tire to the spare donut in our trunk. After agonizing over whether to do so and how much to give, we tried to tip them, but they refused.

Determined to get some waterpark time in, we then drive out to Riverhead at 50 mph. It being a lukewarm Monday in late August, the park was relatively empty and most of the rides had no lines. This was the most fun and least memorable part of our day.

At the end of the day, we leave the park and look for a place in Riverhead to get a new tire. We try three different places, none of which have the tire we need. Resigned to the fact that we’re going to have to drive 50 mph back to the city and I’m going to have to spend a day this week getting my parents’ car fixed, we make one last-ditch effort: Costco. Turns out they have the tire we need! And they only have one left! All is looking up … until they ask for our Costco membership card. Neither of us has a Costco membership. In fact this is only the second time I’ve ever been inside a Costco. They tell us they can’t sell us the tire without a membership. As we debate whether it’s worth it to buy a membership, a woman named Suzy Moskowitz* comes up to us and says to me “I’m sorry to interrupt, but I couldn’t help noticing you’re wearing a Fiddler on the Roof t-shirt. Have you seen the show? We’re thinking of seeing it.” I respond “I’m in it.” Her eyes light up and she calls over her husband: “Harry**! He’s in the Yiddish Fiddler on the Roof!” They see us pleading with the management and they offer to use their membership card to get our tire replaced. Not only that, they offer to let us use their card to get some Costco food while we wait (an offer I inexplicably declined). We thanked them profusely and I offered them comps to a future performance of Fiddler.

My Fiddler t-shirt saved the day!

45 minutes later we had a new tire. (As we had done with the Bridge and Tunnel guys eight hours earlier, we tried to tip the Costco guys. They declined.) As we headed home — driving at a normal speed — we were awestruck by the kindness we had encountered throughout the day. First from the Bridge and Tunnel Transit Authority who took pity on us for not knowing how to change a tire, and then from the couple at Costco and the Costco management.

Around 9:30 we arrived at my parents’ place to drop the car off and tell them the story. When I gave my mother the receipt, she noticed that the name on the Costco membership was Adelaide Levine***. Not Suzy or Harry Moskowitz.

It wasn’t even their membership.

Lessons of the day:
1. There are good people in the world.
2. Costco has everything.
3. Always wear your Fiddler swag!