Partial view of the front of my synagogue, B’nai Israel, a place of sanctuary

At first I couldn’t think of any experience that would rise to the level of road rage. Annoyance with another driver who did something stupid, sure. Maybe a little cursing under my breath, or an occasional blast on my rather wimpy horn. But nothing that I would really call rage. I joked that I was going to go drive around and try to provoke someone, just to get a story. People said ha ha ha . . . no, don’t do that, it’s dangerous!

Then I remembered a scary situation where someone else’s rage actually did cause me to fear for my safety.

I have no idea at this point what I did that made the middle-aged guy in the SUV so mad. It probably wasn’t anything intentional — although I do have a temper at times, so it might have been. Whatever it was, it really pissed him off. I suddenly noticed him in my rear-view mirror, behind me and following much too closely. If I sped up, he sped up too. When I turned a corner, he was right there with me. I was fairly close to home, but I realized that I shouldn’t go home for two reasons. First, I didn’t want him to know where I lived. Second, my garage is not attached to my house, so if he wanted to hurt me, he could get me as I walked from the garage to the back door. I started driving around aimlessly, hoping he would get tired of following me, but he didn’t. This must have been before cell phones, otherwise I would have called 911, or at least called my husband, but I didn’t have those options. Finally I decided to take refuge at my synagogue, because I knew there would be people there and presumably he wouldn’t do anything stupid in front of witnesses. 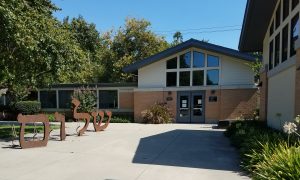 I zoomed into the synagogue parking lot, which is an L shape, partly on the side of the building and partly behind it. I made a quick right turn into the behind part, parked as close as I could to the back entrance, jumped out of the car and ran inside without turning around to see if he was there. (This is a picture taken from the parking lot. The Hebrew letters, which are also bike racks, spell Shalom. As you can see, you have to cross a fairly large area to get to the door.)

I dashed into the foyer, through another doorway and into the administrative offices. Bernie Marks, an eighty-something-year-old Holocaust survivor, was sitting at the reception desk. He was my height and about my weight, probably not a match for the SUV tough guy. But still, a witness. I said, “Bernie, there’s a man chasing me!” He went to the window and said, “I don’t see anybody coming, but just wait here for a while until he goes away.” I sat with Bernie for about five minutes. Then we rounded up a couple of other people and walked out to the parking lot. There was nobody there. I quickly drove home (only a block away), hid my car in the garage in case the guy was still in the neighborhood, and went into the house.

And that was the end of that. But afterwards I was more cognizant of the impression I might be making on other drivers, no matter how annoying they were. At least for a while.

17 Responses to You Need to Calm Down