Prompted By Life Before Computers
23 comments. 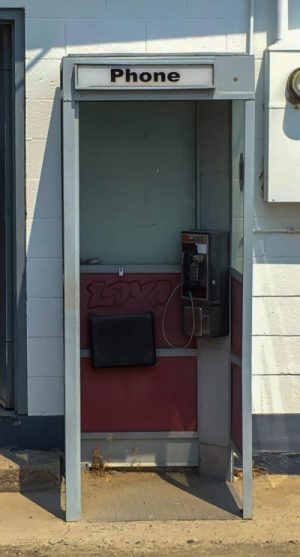 Maroon 5 sang this song in 2012, and I had to laugh. Payphones were already long gone. Kids today don’t even know what they are. What was Adam Levine thinking? And yet the song was a hit, rising to number 2 on the US charts and number 1 in the UK and Canada.

More about telephones: I got a call the other day from a doctor’s office, and the young woman asked whether the number she was calling me on was an iPhone or an Android. “Neither,” I said, “it’s a landline. You’ve probably never heard of those.” “Yes I have,” she responded, “my parents had one when I was little.” Wow. I still prefer talking on a landline phone, I like the heft of the receiver, and the fact that I can hold it between my head and my shoulder if I want to do something else with my hands. I tell people if they want to send me a text, use my mobile number, but if they want to talk to me, call my landline.

I think I still have my typewriter from college, a Hermes, somewhere in the house. I don’t know why, I can’t imagine ever using it. I think back to writing my senior thesis in college, typing draft after draft, and then ultimately paying someone to type the final copy while I was still writing the last chapter. And then, when it was finally finished, taking it to a copy shop and having a second copy made at five cents a page, because we were required to turn in two copies. If I had been able to write and revise it on a computer, not only would I have saved the expenses of a professional typist and a copy shop, but I would not have had to spend time retyping the whole thing with each revision. I’m sure I would have devoted that extra time to making it even better than it was, and I probably would have gotten at least a magna on it.

Doing research before the internet was so much more exhausting and time-consuming. At the very least we had to go to the library to find books or periodicals on our topics. Old newspaper articles had to be read on microfilm, using a special machine that only libraries had. If we couldn’t find what we needed at the library, what did we do? If we were lucky, there were primary sources we could talk to. Otherwise I think we probably just ditched that topic and found something else. I remember as recently as 2000, my daughter Sabrina had to write a high school history paper, and the topic she had chosen from the teacher’s list of topics was Meroe (pronounced Mer’-o-way). What is Meroe? An ancient city-state in northern Africa, in what is now Sudan. Pretty obscure, but right now I can type that word into the search bar on my computer and come up with 1,070,000 results. Twenty years ago Sabrina couldn’t find anything more than encyclopedia articles at our local branch library. 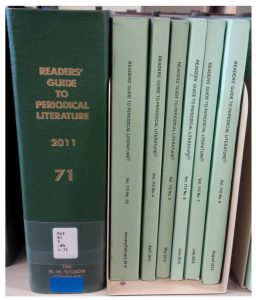 I ended up letting her skip school one day so I could take her to the Central Library downtown where there were scholarly books and periodicals. (Does everyone remember the Reader’s Guide to Periodical Literature?) Even then it was so hard to find enough written about it that my inclination was to see if she could switch to a different topic. But it was either too late for that or else everything else was taken. So she managed to put something together, but it wasn’t very good, because of the paucity of information. Now it would be much easier!

Navigation is another thing that has improved immensely in the computer age. While I loved those AAA TripTiks, and was very skilled at reading maps, having a GPS built in to my car or my phone, with a voice that tells me “turn left here” or “your destination is ahead on the right” is wonderful when driving (or even walking) in an unfamiliar place. I remember getting terribly lost in Providence, Rhode Island many years ago, because even though I had a good map and great verbal directions from a native, there were no visible street signs, so it was impossible to know where to turn. Now I would be able to rely on GPS, with no need to see any signs.

Finding friends, and keeping in touch with them, is also much easier now with computers. Sure, I miss getting those lovely handwritten missives in the mail, but I was almost completely out of touch with my high school and college friends until the advent of the internet. Nobody would have dreamed of calling each other long distance except in an emergency, because it was too expensive, and anyway, every time we moved, our phone numbers changed. Gradually I lost touch with everyone other than the people who showed up at reunions when I did. Getting back in contact once we all had computers was a real boon.

Photography is another area where life was harder before computers. Digital photography has completely changed the experience of taking pictures. Initially just having digital cameras made a huge difference, because you could see the picture as soon as you took it and figure out if it was satisfactory or if you needed to take another one. When I was young, my father would sometimes take an entire roll of basically the same picture, just to be sure that one of them would turn out well, and we wouldn’t know until days or weeks later when the film was developed. With digital, taking multiple shots was no longer necessary. 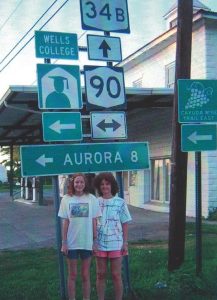 As an example, this picture of Sabrina and me is from our trip to take her to her freshman year of college, as described in Launching my firstborn. We jumped out of the car when we saw this road sign for Wells College. Someone offered to take the picture for us, but his first shot just focused on the two of us and cut off the signs at the top. Since I could see that right away, I was able to ask him to take another one that had the Wells College sign, since that was the whole point of the picture.

The leap from cameras to phones that could take pictures made an even bigger change. Everyone always had their phone with them at all times, so they could snap a shot – or even a video – at a moment’s notice, no need to run for the camera any more. I have so few pictures of my life during college or in my twenties, because I didn’t have a camera then, but nowadays I have pictures of everything, including what I had for dinner on my birthday, and a butterfly I saw in the park.

In 2019, on the 50th anniversary of the moon landing, astronaut Michael Collins said “We thought our onboard computer [on Apollo 11] was very sophisticated but in fact it had less computing power than what we all carry around in our pockets today.”

On the phone in your pocket you can write a letter, or even a term paper (especially with a keyboard attachment), research any topic, look at a map or get directions, search for lost friends and keep in touch when they are found, take unlimited photos and videos, even listen to or record music. All this, and you can even use the phone for its original purpose, talking to someone. It’s a far cry from having to find a pay phone and scrounge up the change to make a call.