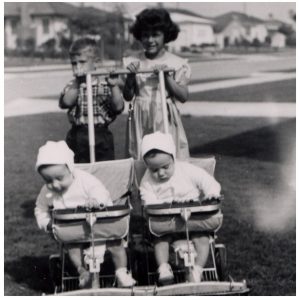 I remember my mother proudly pushing the twins in a double-stroller, Ricky and I walking behind. Passersby would spot the twins and literally stop us in our tracks to fuss and fawn over them, to coddle and coo, and then sometimes, as an afterthought, think to mention that oh, Ricky is adorable, too, and aren’t I a pretty little thing. Who knows where Larry was…by then he’d already begun to drift.

I was one of five children growing up. Larry was about four years older than I was, Ricky four years younger, and Keith and Kevin six years younger. So in our family hierarchy, Ricky and I shared billing as middle children. 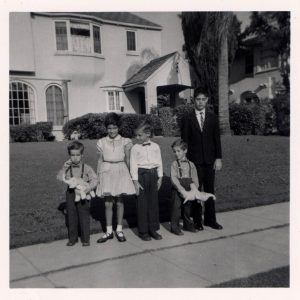 I was one of five children growing up. Larry was about four years older than I was, Ricky four years younger, and Keith and Kevin six years younger. So in our family hierarchy, Ricky and I shared billing as middle children.

Here are the six traits that ALL middle children share:

Notice the word ALL. My emphasis, but no ambiguity there. And you know what? Those six traits might as well be bespoke…tailor made to fit me to a T.  ✓x 6. But take that same bullet list and apply it to Ricky? Not one ✓.

But then there’s this, also Googled, copied and pasted:

“Middle child syndrome is the belief that middle children are excluded, ignored, or even outright neglected because of their birth order.”

I didn’t really feel that way, no more than any child who vies for parental attention. But that would be Ricky. I would tell you more about Ricky’s version of being the middle child but I can’t ask him for that because he has severed relations with the family, and none of us knows why. Maybe that alone speaks volumes.

So do I agree with the stereotypes? Yes, and no.