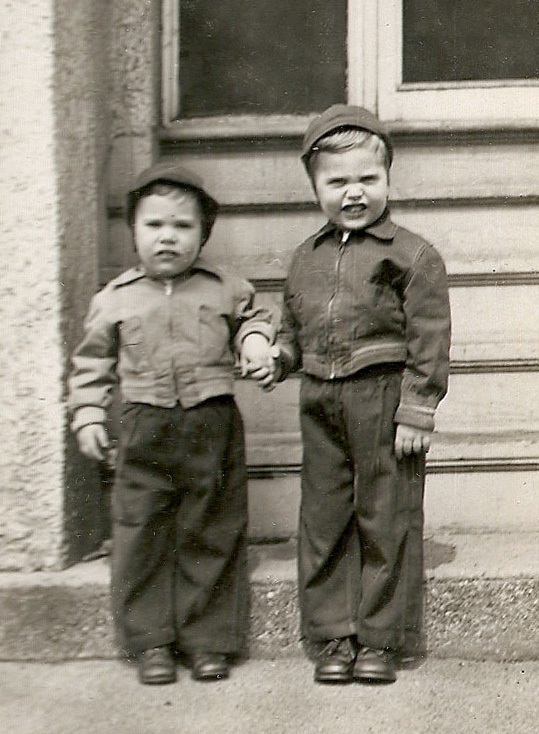 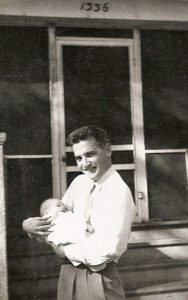 Compared to most mid-century couples, my parents married late. Dad was 34, Mom 29, and they figured they had no time to waste in starting a family. My brother Danny, born August 25, 1949, came first, and for a brief time he reigned unchallenged, the celebrated prince. For Dad, it was a long-deferred dream to have a son. I arrived 14 months later, on October 26, 1950, and when Danny’s exclusivity suddenly expired and he was forced to share the love and attention, he wasn’t happy.

Our parents expected us to be friends, encouraged a companionship that never evolved. They dressed us in matching clothes; bought toys and games we might play together; celebrated birthdays and measured our growth with pencil lines on the kitchen door jamb. But when I study childhood photos of Danny and me, I don’t see a single shot of him being affectionate toward me. I’m the  interloper. 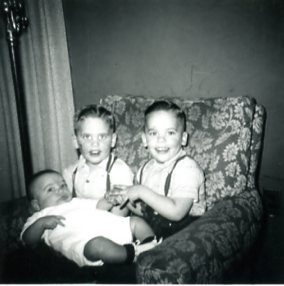 Danny and me, with newborn brother Davey.

My younger brother Dave was born four years later, on July 7, 1954. An adorable kid, funny and sweet-natured, Davey became Dad’s favorite – the only son who shared his passion for baseball and the only one, for a long time, who rarely angered him. This didn’t sit well with Danny, either.

Despite our proximity in age, or maybe in part because of it, Danny and I were foreign bodies in constant collision. From the beginning we were profoundly different: in temperament, in interests, in the friends we chose and the ways we engaged with the world. He was scrappy and blunt; I was dreamy and sensitive. He liked to play outdoors, build forts, scratch and holler and rattle the status quo. I was indoors, looking at books and old movies on TV, organizing puppet shows. 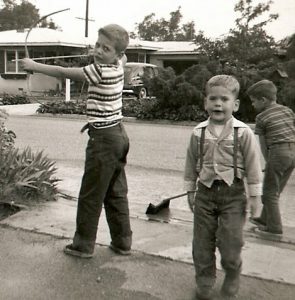 Dan points the arrow. I’m pushing the broom. Davey in the foreground.

Why so different? Danny’s aggression, his impulsivity and adrenaline-seeking instincts – the same qualities that later potentiate his drug use, trouble with authority and attraction to fast-moving vehicles – probably originated in the womb. In 2016 I saw a PBS documentary about the impact of genetics on risk-taking behavior, and of course I thought of Dan. Boy babies receive twice the testosterone of girls, the narrator said, and some boys more than others. “At 15 weeks, when the brain and body are crucially sensitive to hormonal changes, a second surge of testosterone occurs in the embryo and alters the regions of the brain that process fear and excitement.” Danny definitely received that extra dose.

When I was a toddler, Danny pushed me to the ground in our backyard in Chicago and my forehead hit a brick. The wound required four stitches and the resulting scar, which I have to this day, formed the letter V. For years Dan boasted that the V stood for victory – his personal mark of triumph over a weaker adversary. Later, when we were 5 and 6, I playfully grabbed him in the bedroom and said, “Danny let’s dance!” He shoved me against a dresser and once again the blood gushed from my forehead. 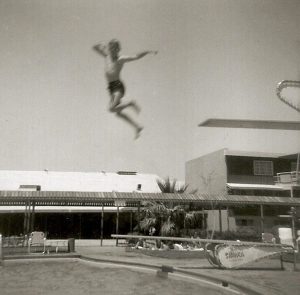 There was always rivalry, always resentment, but one day I discovered the strength of our bond. That summer of 1960, Danny and I spent a week at camp, sleeping in side-by-side cots in a dormitory. One day on a whim, he got on the afternoon bus that took the day campers home. True to his nature, he didn’t tell anyone he was leaving. Just before dinner, as the campus grew still and the hot August sun started to cool, I realized Danny was missing. I panicked, ran back and forth across the campus. I thought he was lost or injured or dead.

Danny returned two or three hours later, nonchalant and expressionless. When I asked where he’d gone and told him I got worried when I couldn’t find him, he shrugged. “That sounds like something you would do,” he said. And walked away.

By the time he’s 13, Dan – no longer Danny – exists in his own orbit. While Dave and I go to movies together, watch the same TV shows and create a silly, hand-drawn newsletter mythologizing the neighborhood dogs, Dan grows more and more autonomous. He isn’t home much and when he is he battles with Dad, vexes Mom and treats Dave and me like pests. Two years later I start high school and Dan orders me never to speak to him or acknowledge him on campus. He’s a terror and I’m no angel, either. Until Dan gets his teeth straightened, I mock his crooked overbite. One night after dinner, our next-door neighbor Steve dubs him “Menu Teeth” because the evening’s meal still lingers on Dan’s upper and lower bite. I go to town on that one: “Menu Teeth” becomes my pet epithet for the summer. 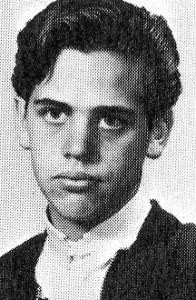 It doesn’t occur to me that in some ways I’m as culpable as Dan in creating conflict. This is the place where memory is a rogue and incomplete, self-serving narrator: when I realize how little I know of what Dan felt about me, my slurs and sniping, my joking about his teeth and his bad report cards. Did he remember the cruelest things I said to him, or did they never burrow into his memory as his meanness did into mine?

My brother Dan died May 3, 1980. He was a helicopter pilot and instructor, and after taking off with a 27-year-old student that morning, he crashed into an open field near Palos Verdes Estates. A Federal Aviation Administration investigation cited mechanical failure, with no fault on Dan’s part. All R-22 helicopters were grounded.

A death in the family makes life stand still. Everything seems embossed in sharp relief. Time is warped and surreal. People’s jokes sound callous, their voices strident. Your parents suffer an enormous loss, a haunting. But life blithely locomotes forward, unbending and indifferent.

I’m sorry Dan didn’t live a long and rich life, obviously because he deserved to, but also because my memories of him are dominated by teenage conflicts. As we got older, we reached a partial détente. In my sophomore year at Humboldt State, Dan and a friend drove up and crashed on my apartment floor. Three years later I was living in San Francisco and he visited two or three times. He was friendlier on those occasions, and we didn’t revert to competing and grandstanding. He didn’t say it, but I think he wanted to open a new chapter in our relationship. In retrospect, I wish I’d understood the olive branch he was holding out to me. I still stockpiled the slights and stings of the past, still identified as the wronged person. Unhealthy as it was, I nurtured my grudge because of its familiarity. Like a stalwart companion who doesn’t judge, it held me close. 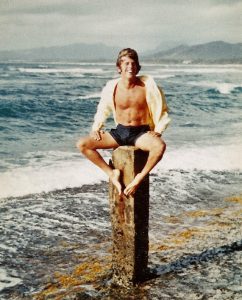 After Dan died our parents rarely spoke about his turbulent side. “He was a good boy,” Dad said after the accident. There was something devastated but insistent in his voice – like a fist raised against a world that might think less of his son. As if he wasn’t fully convinced of that statement, but needed desperately to believe it.

In death, Dan became for my parents the wayward, high-spirited son who redeemed himself with a career in aviation. In the narrative they embraced, his scrambled life acquired purpose, pride, legitimacy. Instead of recalling the chaos of his teen years and early twenties, Dad extolled Dan’s later achievements. Or he’d get a sentimental twinkle in his eye and say to Mom, “Remember when Danny was 3 or 4? You made him pancakes for breakfast and he said, ‘You’re a good cooker, Mommy!’ ”

Grief is different for everyone, and in fact never stops. You don’t “get over” a death in the family. You incorporate it, you manage it. It becomes part of your experience and therefore part of you. The pain subsides but the presence of the deceased is somehow always inside you. “The past is never dead,” William Faulkner wrote in Requiem for a Nun. “It’s not even past.”

This story is adapted from Wild Seed: Searching for My Brother Dan, a memoir I published in 2017.

12 Responses to My Brother Dan

We Could Use Some Middle Children These Days
by Laurie Levy
Birth Order, Family Size and Its Influences
by Joe Lowry
by richard c rutherford