Almost every Sunday of my early childhood, we went to visit my maternal grandparents. (Or at least it seems like it was every Sunday to me.) I loved these visits. They were a chance to halt the sibling rivalry for a while and be doted on by my grandmother, aunts, and uncles. My spinster aunt and several bachelor uncles all lived in the same house, taking care of their parents.

My grandfather died when I was a kid, but he gave me a love for the game.

My mother was the oldest child, so my older brothers were the oldest grandchildren. This gave us special cred. The uncles didn’t really know how to interact with kids, so giving us treats was their default mode. My favorite was a bottle of Faygo Rock N’ Rye pop (translation: cherry soda). As soon as we got there we’d be ushered down to the cellar to pick one out of the huge stash. Sometimes we even got two. Heaven.

During the summer we went during the day, and we’d sit out in their backyard listening to Detroit Tiger baseball games on the radio. They had a huge garden and my grandmother was especially proud of her roses, as one uncle was proud of his tomatoes. We spent a fair amount of time admiring the one and eating the other. Often another aunt, my godmother, would come over with her expanding brood. Her husband, everyone’s favorite and my godfather, always had some new toy to show off. One summer it was a Polaroid camera. I thought it was the coolest thing I’d ever seen. Even though it was complicated and certainly expensive, he let us use it! After you took a picture, you waited about 30 seconds and watched it appear on the previously blank piece of paper. It seemed like magic! Then you had to carefully coat it with a layer of fixer so it wouldn’t fade—a tricky action no one could ever get just right, so the pictures were always streaky. Later generations of Polaroids worked better, but I still remember the thrill of those first self-developing photos.

In winter we went over after supper. It would be cold and dark outside, so there was even less for us to do then unless the cousins were there. But on those magical nights when there was critical mass, my father, grandfather, and uncles would gather around the big kitchen table and play penny-ante poker. The women would escape to the living room, but I stuck around, fascinated by this male ritual. Clearly the game wasn’t about money, but there was enough competition for it to look and feel like a high-stakes Vegas invitational. 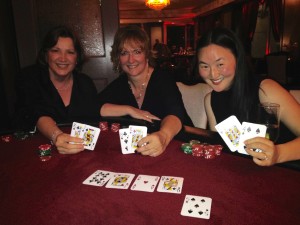 Three of the same straight! What are the odds?

My grandfather was the ringleader, and my most vivid memory of him is from these games. The dealer got to choose the game, and whenever it was his turn to deal, he always, and I mean always, rapped the table with his knuckles and almost shouted: “Baseball!” I had no idea what that meant, something about which cards were “wild,” but it was clearly his favorite. I was small and unobtrusive enough that I got to stand and watch. I learned concepts like ante-up, raise, call, and fold. Kings and Queens I understood, but what the hell was a Jack? And I loved the concept of a “full house.”

Often I’d stand by the winner of a hand and, as a reward for bringing him luck, get a piece of the pot. On the next hand another uncle would invite me over to be his good luck charm and I would rotate around the table collecting tips. I’d often go home with several dollars in my pocket feeling like I’d won the lottery. I don’t think my siblings ever caught on.