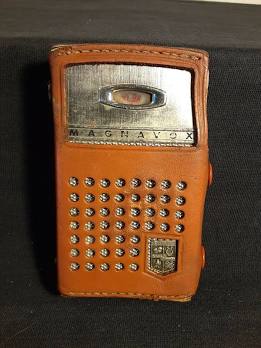 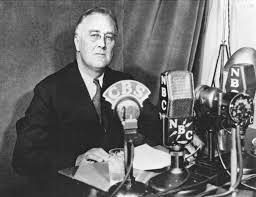 I think it was my fourteenth birthday when my father bought me a transistor radio.  They were a wonder.  Mine was small enough to hold in a hand, with a little leatherette case and ear bud, from Japan.

Deep in the mythology of the Depression years, radio was center stage as FDR gave his “fireside chats”, the original twentieth-century mass direct-to-voter news and politics outreach. My earliest radio memories were of my parents intently listening to the news with Edward R Murrow in the McCarthy era, which I didn’t understand at the time, but knew it was something important.

Radio was also music and entertainment.  I remember coming come home from elementary school for lunch. My mother would serve us soup and sandwiches to the tunes of her adult world:  Bing (Crosby) and Rosie (Rosemary Clooney), Patti Page with “How Much is that Doggie in the Window?”, Patsy Cline doing “South of the Border Down Mexico Way”, Doris Day singing “Que Sera, Sera”. 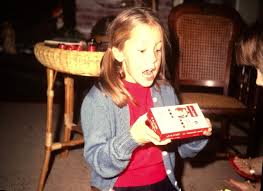 I got up this mornin’, I turned on my radio—I was checkin’ out the surfin’ scene to see if I would go (Beach Boys)

I think it was my fourteenth birthday when my father bought me a transistor radio.  They were a wonder.  Mine was small enough to hold in a hand, with a little leatherette case and ear bud, from Japan.   Advertisements that were geared towards teenagers showed joyous, trim, good-looking, white boys and girls frisking at the beach or dancing to their transistor radios, but I pretty much just listened in my room.  Every week there was a countdown to number one on the hit parade, usually something from Motown, the Beatles, or the Beach Boys.

The stations and “the star making machinery behind the popular song” dictated which ones we would hear; everyone around me would be familiar with the same songs, could recall when they came out by mapping them to the grade we were in at the time.  That was when every year, and portion of a year, remained fresh in my memory, instead of slipping by in a blur.

After six hours of school, I’ve had enough for the day—I hit the radio dial and turn it up all the way (Beach Boys)

I’m gonna write a little letter, gonna mail it to my local DJ.  It’s a rockin’ little record I want my jockey to play (Chuck Berry)

The local station had a weekly “make it or break it” feature.  They would spin the new song, and then play it more over the next few weeks if people voted it up.  I never called in except once, in 1966, when I heard them play “The Sounds of Silence”.  It was a revelation—yes!  Make it! I still remember the tally–93% agreed with me. 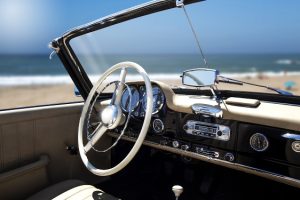 Cruisin’ and playin’ the radio, with no particular place to go (Chuck Berry)

Going down the old mine, with a transistor radio (Van Morrison)

It is hard to separate radio from car culture; so much listening happened on trips, during commute hours, on dates, or generally driving around.  So much driving around.  Getting access to wheels meant cranking up the radio to your station of choice, independence, romantic options.

Janie was lovin’ me, she was the queen of my nights, there in the darkness with the radio playing low (Bob Seger)

Oh honey, you turn me on, I’m a radio (Joni Mitchell) 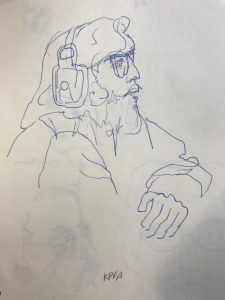 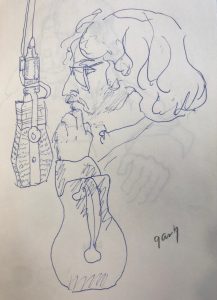 In 1970, I took what is now called a “gap year” following sophomore year of college; to me it was more of an an “I am so out of here and who knows if I will come back” year. I lived in Berkeley and tried to find a job and a purpose.  I did find Pacifica Radio, KPFA, which was community radio–youth, anti-war and counterculture oriented.  They covered local demonstrations and current events, and played good music.  Later, when I returned to the Bay Area, I listened to Chuy Varela play Salsa on Sunday afternoons, and Kris Welch on the morning show for news. There was always a pre-set to 94.1

In later years, my clock radio was set to the Bay Area station KJAZ, with Stan Dunne.  A great way to start a day.  Every year in February, he would sneak in “My Funny Valentine” by various jazz artists, and if you recognized it and called right away, you won something—a mug maybe.  I never won. Mug no, but memories, yes.

And if you’re still within the sound of my voice, over some radio, I just want you to know–you were always my only choice (Linda Ronstadt)

Travel and radio are great.  In different formats and languages, you catch a bit of news, weather, music, and of course advertisements.  It can be sad to find how much is the same everywhere, although even the ubiquitous bubble gum pop songs and rap music in, say, Spanish or German, can provide local perspective.  And sometimes you come across a gem like “Oh Susannah” playing ectopically—really?

In Mississippi:  Ominous sky–find the car’s weather station—uh oh, tornadoes spotted at “Rggglrrgh”!  Get out map—where could that be?  Sky looks BAD, funny green color.  Radio repeats: take cover, tornado at “Rggglrrgh”.  No cars on the road—weather coming from the west—we turn to the northeast and hit it on the Natchez Trace parkway—90 miles an hour plus.  Next morning, paper clarifies it was “Ridgeland”, close to where we were, right next to a reservoir–that tingly Spidey sense of danger didn’t lie.

When we officially “entered” Canada in 2004, we turned the radio to the CBC.  We were weary of incessant bad news: war in Iraq and Afghanistan, Guantanamo, Arnold Schwarzenegger, HMO’s, mass shootings.  As we headed East through the Fraser Valley, suddenly there was a special news bulletin–what now?  Local sheep were being threatened by a pack of coyotes!  High five!  How glorious to be where THAT was the crisis du jour!

Video killed the radio star, in my mind and in my car (The Buggles)

Radio isn’t dead yet, despite CDs, Walkman and IPods, MP3 players, MTV, streaming and social media, podcasts and blogs, cable and YouTube and Vimeo, Spotify and Pandora, Apple ITunes and Google, and smart phones.  I only listen when I am driving anymore, often the scratchy NPR (now NPB—Radio has become Broadcasting to reflect different platforms) station from Omak, Washington.  Radio has been a lifelong companion.  I still appreciate that connecting voice.  And for the future?  Que sera, sera.