At first I had trouble identifying an encounter for this story. Most of the romantic encounters I have had were not exactly random, although timing played a part. As I thought back, chance events surrounding these meetings likely didn’t affect the outcome of the relationship. However, one professional encounter started so small I could never anticipate how profoundly it would change how I thought about business and maybe even life.

One professional encounter started so small I could never anticipate how profoundly it would change how I thought about business and maybe even life.

In the middle of 1986, I met Marcia at a small professional networking group that had grown out of our Peninsula Women in Advertising organization (see my story From Fashion to Feminism). There was nothing to indicate this meeting would change my life. Marcia and I discovered we were almost the same age and both of us were having a dramatic year. I had become engaged, was about to move, and she had been divorced and was raising her three-year-old son. She recently had found a part-time job working as a marketing person for a consultant, and to promote the business, wanted someone to ghost-write articles for him.

I’d been freelancing for about three years at this time and was eager to take on more work. Shortly after the networking event I met with Marcia and her boss, Perry Gluckman, a PhD statistician. I had no idea he was in the inner circle of Dr. W. Edwards Deming’s consultants or what that meant. I doubt I had a clue about who Dr. Deming was–the person who taught the Japanese how to make quality products and restore their economy after World War II. I was about to find out. Although I had no statistical or quality background at the time, for some reason what Perry was talking about resonated. One of the best ways to learn something is to have to write about it, and I’d talk with Perry for hours and would read the books he recommended while I was writing articles and op-eds. I began learning a new way of thinking.

The following year, Dr. Deming came to San Jose to put on his famous five-day seminar. I desperately wanted to attend, but there was no way I could afford the fees. No worries, Marcia told me, there was a worker-learner program. All I needed to do was put in a few hours helping set up, register people, and go-fer as needed, and I could attend the seminar.

In his late 80s at the time, Dr. Deming was tall, imperious, and totally intimidating, until he started to teach. His methods were 19th century–writing on a white board, no visual aids. (The prose style in his books is 19th century as well and challenging for our 21st century attention spans.) But once he started talking, in his deep, booming voice, you couldn’t help paying attention. Then the hands-on work began, with experiments and demos. The first was the famous Red Bead Experiment. For an explanation, you can Google it, and YouTube has some fun demos.

Here is what the actual components of the Red Bead Experiment look like: 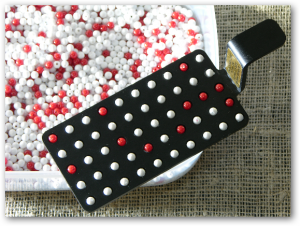 Over the next five days, after going through the Red Bead Experiment, the Funnel Experiment, the PDSA card game, and other exercises, my thinking about systems, variation, individual effort, and other issues began to change. Many things that had happened to me in business began to make sense and help me understand why I had left corporate America, extremely dissatisfied. After the second seminar a few months later, I reached a crossroads of sorts.

I wanted to keep learning, but I understood enough to realize that if I continued, it would be impossible for me to go back to the old ways of thinking. This might mean I could never go back to corporate America. It took me several weeks to decide to commit to continue with Dr. Deming’s business philosophy. Once I did, I started writing Perry’s teaching curriculum, helped in his classes, became a founding member of a local Deming User Group, and helped edit one of his books.

During this time, Marcia was learning from Perry and Dr. Deming and then went out on her own to become a management consultant. My learning continued and I wondered about following in her path, although I loved writing. Unfortunately, in 1992 Perry became seriously ill and died, and the next year Dr. Deming died. I felt I was a couple of years short in my expertise to go into consulting, but continued to use Dr. Deming’s principles, often even in secret, after I rejoined corporate America in 2006. Dr. Deming’s practices sometimes can threaten traditional managers, so I tread carefully, although I was open in my disdain and disregard of annual performance reviews (statistically indefensible, destructive ranking and rating, an incredible waste of time and resources) and said they should be abolished.

Today Marcia lives across town, and that three-year-old son is the father of two cute kids. She still does management consulting, trying to help companies transform–really transform. Without that meeting, my professional life would have been a lot less fulfilling and interesting. My chance meeting opened up worlds that would have remained undiscovered.

Martha My Dear
by Risa Nye
Hyper-lucky
by Joan Matthews