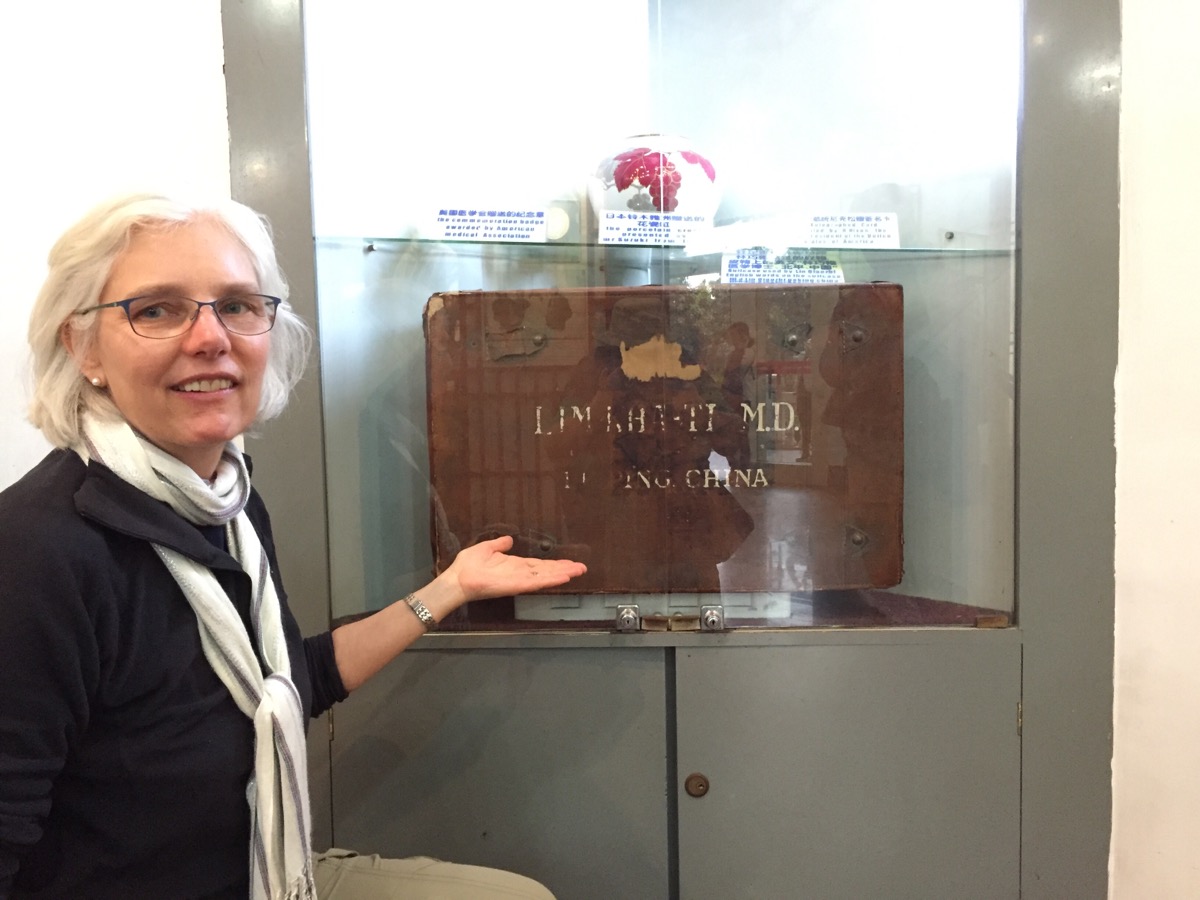 Now that decision seems pre-ordained and perfect, as life never is--but it is for me.

The Nationalists have left the city, and the Communists have not yet entered.  At the Peking Union Medical Center, my mother has just given birth, and is asking for a cigarette.  The doctor is not favorably impressed.  But my mother is very impressed with the doctor, a tiny, energetic and gentle Chinese woman who has followed her through pregnancy, speaks English and has been trained in Western medicine—an improbable and extraordinary combination.  My mother toys with naming her daughter after the doctor she idolizes, but decides against a Chinese name that could seem strange back home.  By April, the family must leave China.  15 months later another daughter is born at Columbia Presbyterian hospital in New York, and this time, she is named after Dr. Lin:  my name will be “Khati”.

Mainland China is a mysterious, inaccessible country in the 1950’s.  The stories from before I was born seem as distant as ancient history, and in the blackout, there is no way to know if Khati even lives. 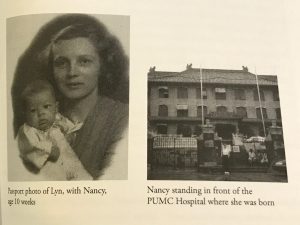 The war in Vietnam has turned all attention towards Asia.  Nixon has started “ping pong diplomacy” with China.  So little is known clearly.  Do women really hold up half the sky?  Are barefoot doctors the answer? Do 100 flowers bloom?  Are the Red Guards a redux of the French Terror? Delegations are cautiously exchanged, and people with old ties to China are identified.  My mother receives an invitation, and calls me to ask if I would like to go with her to a reception at the Watergate Hotel in Washington DC to meet–Dr. Lin!

I am overwhelmed.  She is not a myth, she is alive, I can meet her.  I am in the midst of pre-med courses, after an unexpected switch from visual studies the previous year.  Now that decision seems pre-ordained and perfect, as life never is–but it is for me.

The room in the Watergate is filled with flowers and quite a few women of a certain age who had been patients of hers in China. Khati is smiling, gracious, surrounded by people.  When I finally meet her, it is hard to talk and my heart is pounding.  Somehow I sputter that I am named after her, am pre-med, hope to serve the people too.  I ask what the characters in her name mean, and she laughs, says, “peculiar kid”.  Invites me to stay in touch and come visit; this is wishful thinking.  The crowd presses in and my moment is gone. 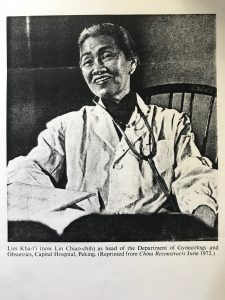 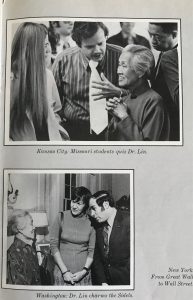 Khati has been dead for 15 years, still an unfinished mystery. After many years of working in community health centers, I am married and have emigrated to Canada. And now I am finally in Beijing.  I come armed with old maps, annotated by my 86 year-old father, showing where my parents lived (north and a bit east of the old Legation Quarter), the location of the old PUMC hospital, and where my mother taught school.  The massive old city walls have been torn down and instead, the subway runs in a ring below the streets.  The downtown has also transformed itself to welcome international tourists for the Olympics.

Trying to decipher street signs and looking for the remnants of the old hutongs in the burgeoning city is a challenge.  But we are in the right area and do find the modernized hospital.  There is no immediate evidence of Khati, and I am too shy to press further.  There is a good suspect for the site of the former Peking American school, and a few old houses where my parents could have lived.  We wear ourselves out walking the city center, the Forbidden City, the lakes and neighborhoods, poking into stores and restaurants and galleries.  Everywhere I go, I see the city of today, but search in my imagination for the city as seen by my newlywed parents 60 years ago.  I am endlessly astonished by modern China. 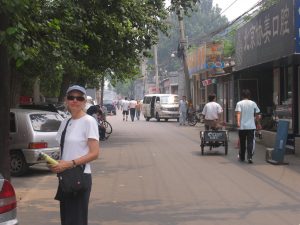 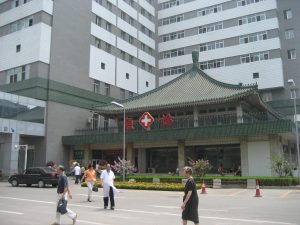 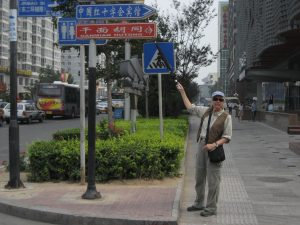 Both of my parents have now died.  I am closer to retirement. The internet has transformed travel and research.  It is midnight, and a cab is taking us from the airport into the city of Xiamen, searching for the address of a place we have booked online for a couple of days.  It is off a tiny alley, in a very authentic old house with courtyards and traditional furniture; it is also cold and damp in the rain, and no one speaks English.  Tomorrow we will search for the memorial to Khati that the internet alleges is on the offshore island of Gulangyu.

In the morning, we chat with some University students and fellow guests with a bit of English (“Tina” and “Tony”, “Echo” and “Star”). Bad news—the ferry to the island near us is only for locals, and the main ferry is closed due to foggy weather.  Good news—they have a map and show us there is indeed a memorial there. We locate a young assistant (“Nick”) from a nearby tourist agency who is intrigued by our story and willing to help, should the weather lift.

The next day is still foggy, the ferry not running, and we now have coughs.  Prospects are bleak, and we leave tomorrow.  But our map shows a maternity hospital nearby and we discover it is named after Dr. Lin (now called “Lin Chiao Chih”—”Khati” was the Amoy dialect).  Navigating a warren of old city streets, we find our way to the hospital and an unexpected large statue of Khati herself in front, heroic with stethoscope and lab coat flying, and an inscription with the characters we recognize as her name.  The hospital waiting room is full of mothers and children, fittingly.  I am happy. It is more than I expected. 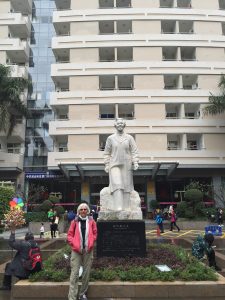 Better news—Nick calls to say the fog has lifted and we can now make it to the island.  The ferry terminal is a madhouse, jammed with people in a tangle of lines and checkpoints with minimal signage we can’t read.  This would have been impossible to negotiate on our own.  Gulangyu is a now a major tourist attraction, the site of old European-style buildings left from the days when foreigners were sequestered on the fringe of China.  Nick leads us on a long trek, amid the throngs that roam the car-free streets and along the beaches, where people pose for wedding pictures, visit the piano museum, climb to the high lookout tower, buy souvenirs and street food.

Hidden on a low hillside, in a garden, is the Khati memorial.  There is a statue of her, with her ashes buried behind it, and another statue of hands holding a child.  A modest building is filled with photos of her, most with English subtitles: graduating from Medical School, tending patients, meeting Mao and Chou en Lai, participating in receptions and conferences.  Her old briefcase is there with her name—”Lim Kha-ti MD, Peking China”. 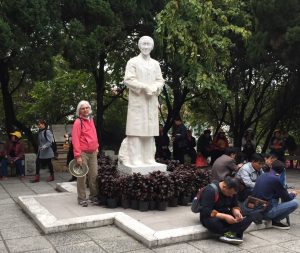 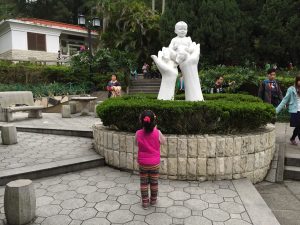 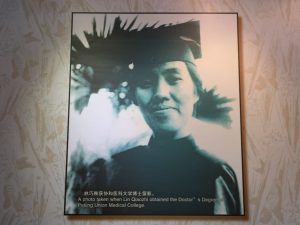 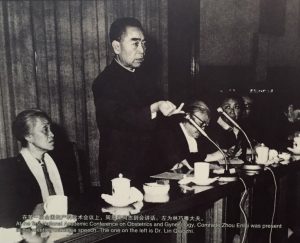 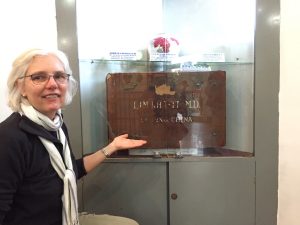 More story is revealed. It is impressive. She was born in 1901 and grew up in the Gulangyu European enclave. Her mother died when she was only five years old—possibly from cervical cancer, and her father was also not well.  She learned English at a missionary school, and was such a promising student that she got support from mentors there, as well as her brother, to attend medical school in Peking, finishing an internship in 1928.  She was sent to Manchester, London, Vienna, and Chicago for further training and research, but turned down opportunities to stay abroad, preferring to work as an obstetrician-gynecologist in China. When the Communists came to power in 1949, Khati elected to stay as well. Who can say what trials she may have experienced, but she clearly persevered, becoming a leader in women’s health.  Reported to have delivered over 50,000 babies, she continued working to the end of her life; the memorial recognizes this remarkable person. 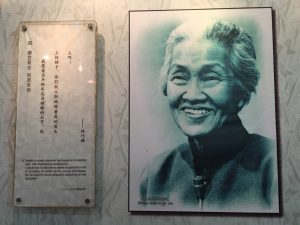 I reflect on how strange it is to complete this connection, across continents and lifetimes.  Memories twine the past with this place, name, and my own family, into a  story of personal significance.  For this I am grateful.