Prompted By A Year in the Life
10 comments. 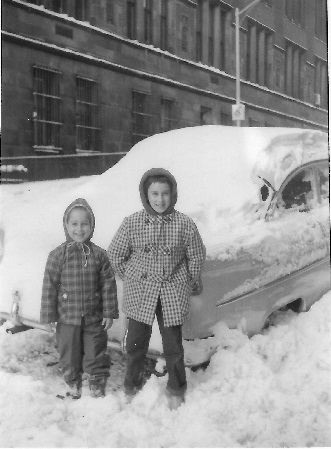 The year: 1957-1958. I was six and my sister was eight when our parents told these two San Francisco-born California girls that we were packing up and moving to New York City. My father had entered the doctoral program at Teachers College, Columbia University, and we’d be living in Morningside Heights for a year—giving up our house and our big backyard for an apartment in the city. For months before our move we would jump up and shout every time we heard someone say the words, “New York, New York.”

I don’t remember too much about the car ride we took across the country that summer, except for being crammed into the back seat of my parents’ gray Plymouth. I do recall that my sister and I sang “You Ain’t Nothin’ But a Hound Dog” so many times we drove our parents crazy.

We arrived in New York City very early in the morning. Ahead of us lay our first sight of snow, riding in taxis, seeing the Rockettes high-kicking their way across the giant stage, getting hot bagels on Sunday mornings (and learning how you had to time it right to get your bagels before mass was over, otherwise the lines were too long), trips to the automat where the sandwiches lived in little apartments too, exploring Central Park, Grant’s Tomb and Grand Central Station, seeing a Broadway show, and having the opportunity to meet people from all over the world. Also ahead of us (or me mostly) were several of the childhood illnesses we had managed to avoid in California. In one year, I caught and generously shared with my sister both the measles and the mumps. but somehow spared her the curse of head lice. And another thing: I left my appendix in New York City.

We were the new kids at the Agnes Russell School as first and third graders. An adult escorted us to school, even though we lived just across the street in Bancroft Hall, the married student housing for Teachers College. Back home in California, we were free to cross the street to play with the kids who lived up and down the block. We would spend all our summer days outside, coming home when it was dinner time. But in New York, we were under the watchful eye of an adult at all times, even on the playground behind our apartment. We held hands when we walked together. People talked so fast we could barely understand them, especially the big girls who danced at the studio where we took our lessons: ballet for my sister and tap for me.

Our apartment was tiny, and even though my sister and I were used to sharing a room in our small California house, these were very tight quarters. The kitchen was closet-size, making meal preparation a challenge for my mother.

My parents got invited to some fancy parties and we got dragged along too. We dressed up for these and other special occasions: hats and gloves, full-skirted dresses with petticoats, and shiny party shoes. I especially liked the bon voyage parties on the huge ships, when people tossed serpentine streamers and confetti. At the parties, my sister and I collected those fancy toothpicks, the ones with cellophane curls, that were stuck in the little sandwiches. We were fascinated with the furs women wore; we liked to sneak off to find the room with the coats and stoles so we could touch them and decide which one felt the nicest. 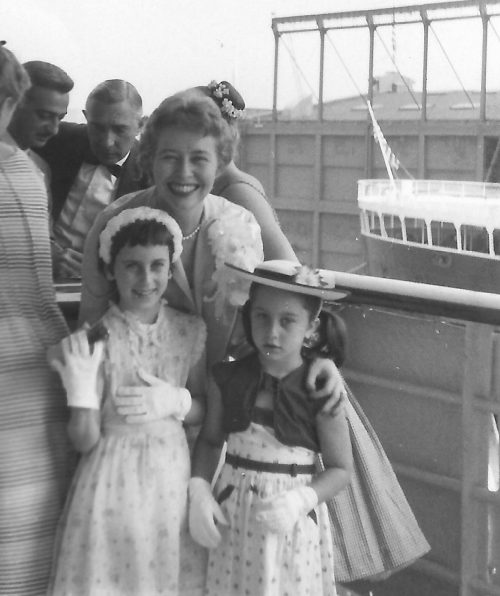 Our first real winter: two little girls bulky in hooded jackets, mittens, quilted overalls and rubber boots – posing for my dad as he adjusted the Brownie camera. How magical to watch the flakes fall on our upturned faces! Inside, the unforgettable, nose-wrinkling smell of wet clothes drying on the radiator. Going from the cold outdoors to the stuffy overheated indoors gave us our share of colds that winter, but we didn’t care.

My memory  is a jumble of tastes, smells, sights, and sounds. The stale air of the subway stations, the extra chewy bagels and buttery lox; fragrant rye bread and piles of pastrami and corned beef at the deli; taxis whooshing by, steam coming up from manholes in the street; hot, hissing radiators, bulky snow clothes, mittens on a string; having to take the elevator up to our apartment. The store windows at Christmas time, each one a winter wonderland. The Marilyn Monroe “Seven Year Itch” moment my mother reported when her full skirt billowed up around her in front of a construction crew. The day I had a stomach ache that kept getting worse, the one I didn’t tell anyone about for a few hours because I didn’t want to get in trouble for eating too much candy at school that day. My babysitting neighbor with a copy of Dr. Spock who finally made me bend this way and that way when the hurting got so bad I had to tell, and when I couldn’t bend to the right, she called my parents. My late-night ride in a taxi with my mom and dad when my side hurt so much; my dad and I both cried, and the surgeon, called in from a night at the opera, arrived at the hospital in his formal evening wear — long cape with a colorful lining, top hat—and assured me that I would be fine, but I needed to have an operation to take out my appendix. I told my parents not to worry and then the memory fades to black. A row of black stitches that itched until they got pulled out.  A scar on my belly.

A Passover Seder with new friends in the apartment building. My first taste of Manischewitz wine. Falling asleep at the table.

My dad, touch typing like a fiend on a borrowed typewriter, discovering several pages in that it was a Hebrew keyboard (or was it Hungarian? Either way.)

Dad took us to a diner that had railroad tracks running along the counter. When your order came up, a little train came out of the kitchen with a plate perched on its own car, and stopped in front of you. Ever since then, I’ve yearned to have my food delivered by a train.

Another Dad story: One day he was rushing out to move the car to the other side of the street, like everyone did, when a big Irish cop waved him off. “No need to move the car today, sir. Don’t ya know, it’s Tisha B’Av?” (a solemn Jewish holiday).

Monuments, skyscrapers, Grant’s Tomb. Alma Mater and Butler Library at Columbia; Morningside Park. Cars and taxis honking, hustle and bustle on the street. Shopping at Alexander’s in the Bronx. Going to the country—in New Jersey—to visit friends of my parents, running to catch fireflies in jars with the other kids. Apartment neighbors we shared a wall with had two little girls too. Thumping the wall between our apartments: shave and a haircut, two-bits.

For years afterward, my sister and I would begin a sentence with “When we were in New York…” as we launched into a story about the Empire State Building, the Statue of Liberty, walking around the Columbia campus, or eating in that little restaurant with the train tracks on the counter. And we were both June Taylor dancers, too. Really. For one year. 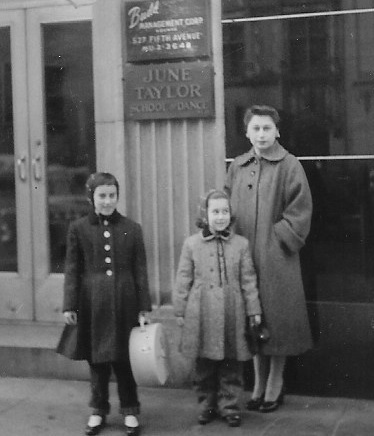 I’m the sole keeper of these memories now; my parents and my sister are gone. Remembering my year of being six in the city makes me happy, even the part about the measles and having my appendix removed. My family spent an unforgettable year in New York, and I have the scar to prove it. 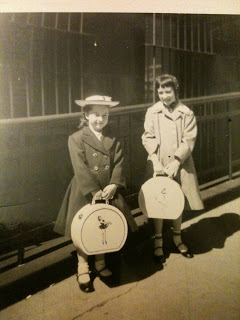 10 Responses to Six in the City: A Year in the Life