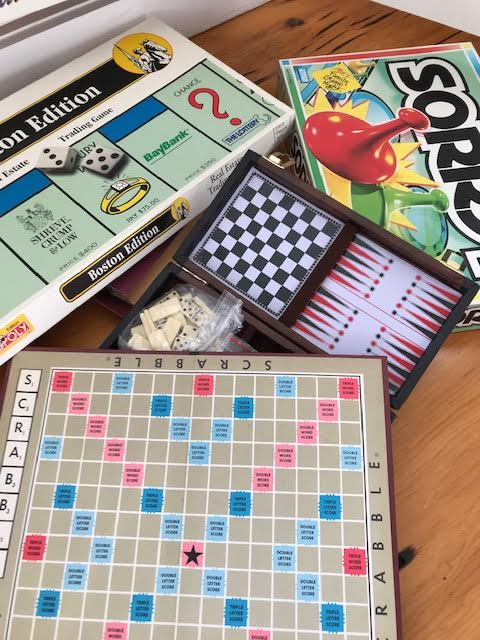 When we were little, my brother and I loved to play Sorry! by the hour. We’d set up the board on the carpeted floor in our living room in Detroit and hop the pieces around the board, squealing with delight if we could send the other’s pieces back to the start, yelling at each other, “SORRY!” I don’t remember playing any other board games with him. That was it. We invented other things to do with one another, usually having something to do with the tape recorder he received as a bar mitzvah gift from our aunts and uncles. We’d make up plays, or listen to “Peter Pan” or “Peter and the Wolf”. He is five years older than I, so our interests were similar, but not always the same. He always had a heavier academic work load than I did and was out of the house long before I was.

I don’t remember playing board games with my girlfriends. We played dolls of all kinds; Betsy Wetsy, Barbie and Ken mostly. I had a Miss Revlon doll that I really liked, a real fashion plate before Barbie came on the scene.

As I grew older, there would be family games of Yahtzee on Saturday nights if we were all in the house. I believe we would have teams, sometimes the men against the women, or mix it up. Those could be a lot of fun.

I begged for a OUIJA board as an early birthday present in November, 1963. I took it over to the Pearlmans, two doors down, during the time of the Kennedy assassination, when my mother was still in bed, suffering through her nervous breakdown. We spent hours asking that board every question we could think of: who would each of us marry, what would the future hold for each of us (there would be four in the room: me, Ralph, Nancy and Milton). All our hopes and dreams were asked of that disk and letter board. I can’t remember a single answer, but being in that house helped me get through those darks days. It is no wonder that I became obsessed with the Kennedys. My idol had his brains blown out, we were living out a national tragedy, but in my own home, my mother’s mental distress couldn’t let me grieve and mourn with the nation. She couldn’t bear having the TV on, which I desperately wanted to watch, so the Pearlmans offered me solace, while my obsession with all things Kennedy grew.

I played a lot of Solitaire after homework was complete in high school. I sat, spread-legged on the floor between the twin beds in my room and laid the cards on the floor, between my legs, turning them over, searching for aces, kings, high cards to make the suites I needed. Shuffle and start again. A great time sink, while listening to Top 40 radio, with my door closed, avoiding my mother.

Of course, I had Monopoly, but that took forever to play, so it wasn’t brought out often. I have a little note in my childhood game that I once won with (X) amount of money. I played against myself, but didn’t cheat. I was a lonely kid, though I often didn’t mind being alone. I took a trip to Cleveland and Toledo to visit maternal relatives in June and July, 1970, the summer after graduating high school. I remember a cut-throat, dragged out game of Monopoly with my cousins Chuck, Helene, Judy and Gordon. At some point, we started pairing up against one another to defeat each other. Gordon paired with me and together, after hours of play, we won! It was a hard-fought victory. He also told me about (and introduced me that trip) to a cousin of his who would also start Brandeis in September. That was an added bonus.

After graduating Brandeis in 1974, close friend Christie came back to live in Boston in September of that year. Backgammon was all the rage and she taught us how to play. We got together for dinner several times a week. I even cooked then, though she is a much better cook, and after dinner, we would play a chouette, which is what a match is called. We got to the point where we went together to tournaments in Cambridge a few times. Though Dan and I were novices, I took second place in one once and won some money. When we visited Christie at the Playboy Mansion the following year, Hef and others were involved in heavy games with large wagers. We didn’t bet at all. We sat at a second table and asked Kareem Abdul-Jabbar if he wanted to play with us. He said he didn’t bet. We said we didn’t either, but he declined.

When Dan and I were first married, we loved to play Honeymoon Whist, which had a passing resemblance to the Bridge or Hearts that we loved to play in college. While with Bob (my boyfriend before Dan), we used to get a game of Hearts together in his suite with two card decks, get really stoned, then watch the expression on someone’s face if they got the Queen of Spades dropped on them twice! Now Dan plays those sorts of games on his iPhone.

Trivial Pursuit was well-suited to us when Roger and Francine moved back to the Boston area. Roger loved to play board games after dinner. We never got into Risk, but we all loved to play Trivial Pursuit, particularly, the spouses against once another, as Francine and I knew the lit and culture questions and Roger and Dan knew the sports questions. Once they had their young kids (a few years before we had ours), we’d go over for dinner, wait for the children to go to sleep, then pull out the board. I will never forget that somehow we pulled out the answer Vanilla Fudge to some obscure pop tunes questions.

We would occasionally play Scrabble, but once we bought our Vineyard house, and Dan’s parents stayed with us for weeks at a time, the Scrabble board got lots more use, particularly as our children got older, with bigger vocabularies. The dining room table was the location of play and the board game could occupy the entire evening. An official Scrabble dictionary was in the house when we bought it, so we were ready to rumble.

Now the grandparents are gone and the kids never come. The board games are in a cupboard, unused. They bring back memories from childhoods long gone.