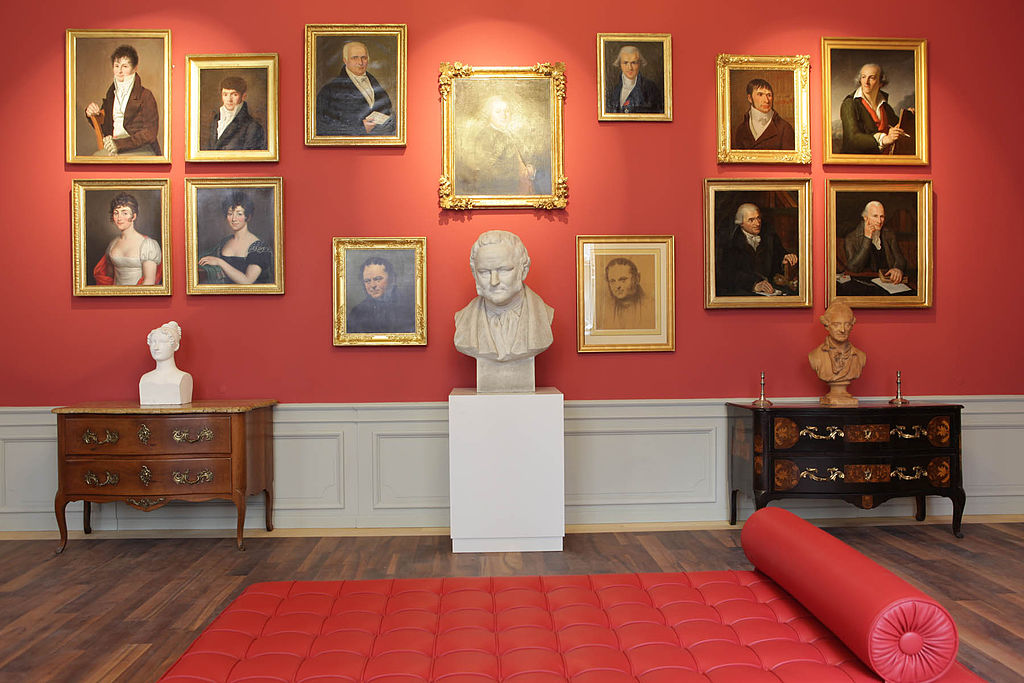 Not the National Portrait Gallery, but the Musee Stendhal

Art has always been a part of my life, even though I have no specific talent for drawing and painting. My mother was a painter, and I grew up surrounded by canvases, drawing paper and pens, and pastels. I recall the smell of oil paints and turpentine. I couldn’t wait until my senior year in high school, when I could take a year-long arts survey course, taught by Mr. Kuhns, a diminutive, quirky man who did needlepoint as a hobby. We did a unit on music (but nothing later than Franz Liszt), but my clear favorite was European painting. I loved looking at slide after slide.

My fascination continued at Mills, where I took one or two art history courses per semester, starting with an intro called Seven Major Artists. Other than struggling through architecture terms while studying Bernini, I loved it, and decided to do a minor in art history to complement my English major. I enjoyed going to the de Young Museum to look closely at paintings and write about them.

One of my professors, Wanda Corn, made her courses especially fun by having her students create an end-of-term party based on the era we were studying. We made costumes, selected music, prepared food, and conducted era-appropriate entertainment. A highlight was the neoclassical course, when we put on tableaux vivants. My classmate Crystal, who bore an uncanny resemblance to Madame Recamier, looked amazing as she leaned across the famous fainting couch (often called a recamier), just like in the painting by David.

While I was a student, Mills was on a 4-1-4 schedule. We had a fall and a spring semester, and in the January term took one intensive course. We were offered the chance to study away from campus, and I worked summers and weekends so that, in my junior year, I could go to Europe for a month to study theater. It turned out to be an amazing month, attending class in the morning, sightseeing in the afternoon, and going to plays at night. We spent the first week in Paris. Naturally I wanted to spend sightseeing time at art museums. Because it was January, many museums were closed, but the Louvre was open. Although I practically trotted through it, I did see the Mona Lisa (from rather far away).

The next week we went to London for the remainder of our trip. On my first sightseeing afternoon I went to the National Gallery and wandered into a small hallway where I could practically touch the exquisite Arnolfini wedding portrait by Jan van Eyck. What excitement! So, I didn’t think anything of it when, a day or two later, I went to the National Portrait Gallery. I entered and crossed the threshold to a large room, completely filled with portraits by Rembrandt. I’d never seen so many portraits, let alone so many Rembrandts, in one place.

I took a few steps and suddenly the room seemed out of focus and my knees became weak. I sank to the floor, kneeling and fortunately still conscious. Two security guards came over and helped me up, then guided me to a bench. “Another one with Stendhal syndrome,” one of the guards said. “Huh?” I asked. “Just relax, luv,” he replied. “Every so often it happens to a body. You’ll be fine soon.” The other guard added, “This happened to the writer Stendhal, which is why they call it by his name. It’s when a person becomes overwhelmed in the presence of great art.”

I’d read Le Rouge et le Noir by Stendhal, in French to boot, but didn’t know about the syndrome. It is a psychosomatic (I prefer the term mind-body) reaction to visual beauty. At this point in my London trip there were so many more museums I wanted to visit. Would this happen again? After resting for a while on the bench in the Rembrandt room, I continued, somewhat deliberately, through most of the museum. A few days later I toured the Tate and admired all the Turners without incident, and I didn’t experience the Stendhal syndrome again during the rest of the trip.

As it turns out, I’ve never had Stendhal syndrome since, despite having visited and enjoyed many art museums in the US, Europe, and Thailand. Although I thought about the syndrome right before I went to the Picasso and Miro Museums (the Miro Museum is one of my all-time favorites) in Barcelona, once I got there I never felt at risk for a minute. Why I had Stendhal syndrome that day in London’s National Portrait Gallery I’ll never know, but the experience reinforced that I felt deeply, and viscerally, about art and its beauty.

21 Responses to Stendhal Syndrome at the National Portrait Gallery