Prompted By Basements and Attics
15 comments. 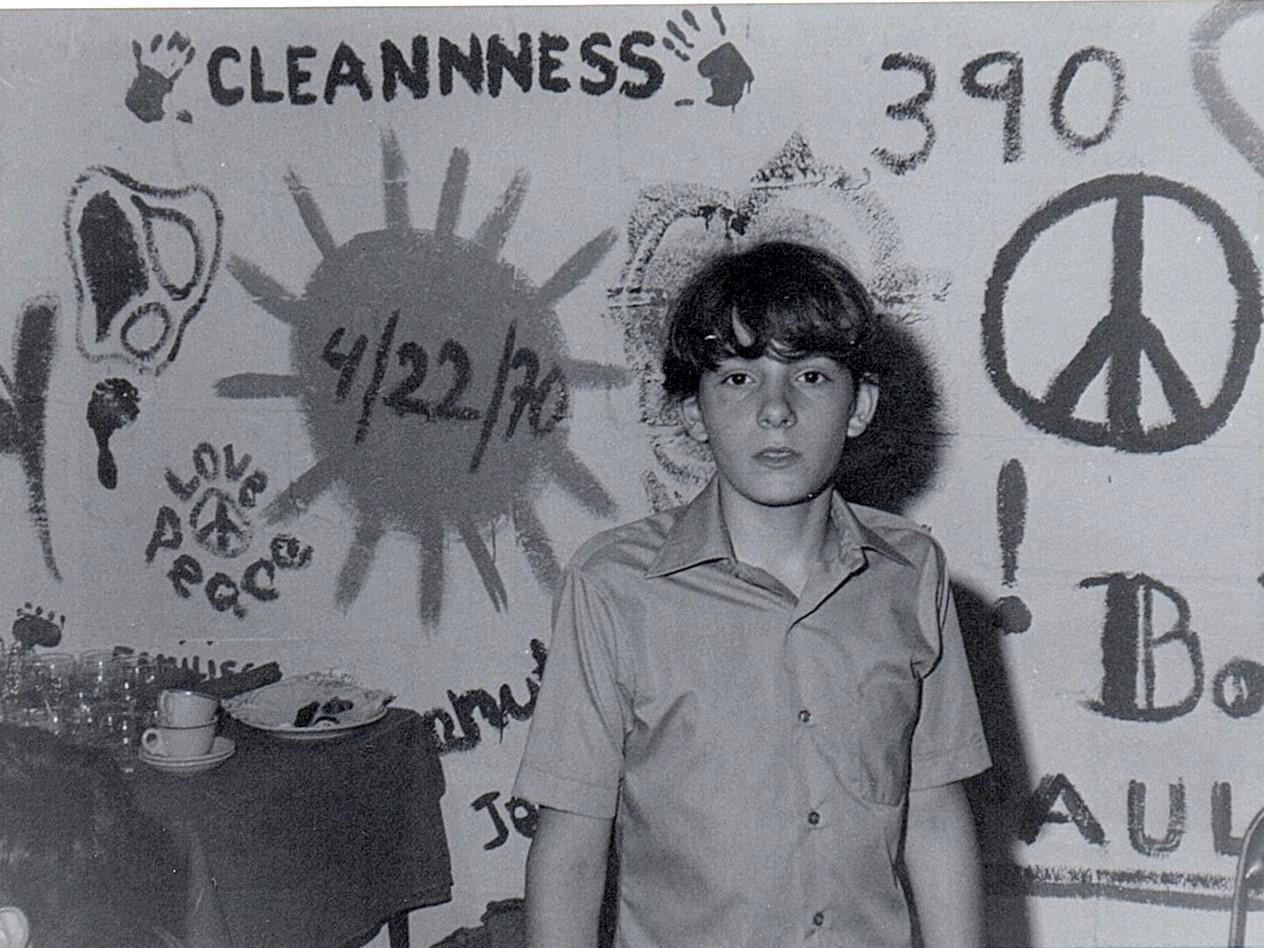 My first cousin Robbie in front of the infamous basement wall

I’ve never really liked basements and attics, having plenty of exposure to them during my childhood in New Jersey. Fortunately, in California, I’ve rarely had to deal with them. Basements are rare in California, and most attics are no more than crawl spaces.

The basement looked bright and cheery, and the wall added a lot of color. Alas, the sentiments on the wall remain relevant today.

The basement of our first house in Verona, New Jersey, was musty, unfinished, and scary. My mother had to go down a flight of steep stairs to use the washer. (We didn’t have a dryer until I was about eight or nine.) At about the time we got the dryer, my parents got an upright piano (a “gift” from someone who no longer wanted it) that ended up in the basement, the house being so tiny it wouldn’t fit in the living room. I had piano lessons down there twice a week for a year, until everyone realized that I had no talent and inclination to continue. The piano remained in perfect tune because of the basement’s humidity, according to my teacher.

In 1965 we moved to a larger home in North Caldwell. The piano now had a place in the family room, where it promptly went out of tune. The basement wasn’t too dark or scary, with plenty of room for the washer and dryer, storage, a small workshop, and a ping pong table. However, because of where the house was situated relative to a slope toward the back, water could enter from the back yard and flow down into the basement. Because the street level was lower, we could open the basement door to the garage and sweep the water out with a large push broom, directing it down the steep driveway and into the street.

This task, which often fell to me, got old quickly; sometimes at night or early morning I pulled on galoshes and had to sweep. About three years later, my father started traveling for business very frequently, so to avert major flooding a broom couldn’t handle, he installed a sump pump, which worked very well to keep the water out and make the basement more usable.

The spring of 1970, when I was a junior in high school, was one of the most eventful of my childhood. I was taking driver training to get my license, Viet Nam war protests were happening, and Earth Day was coming up, along with the recycling activities of our ecology club (described in detail in my story Eco-Freaks Meet the Mob). For whatever reason, whether by my mother’s prompting or some practicality, my father decided that the basement cinderblock walls needed a coat of paint.

He was traveling and my mother was busy planning my brother Allan’s upcoming Bar Mitzvah in June, and hiring painters wasn’t in the budget. So, my dad proposed that my friends and I paint the basement over a weekend, with the reward being that we got to paint art on one wall–anything we’d like, as long as it wasn’t obscene or really offensive.

Armed with rollers and paint my dad supplied, my friends Adriana, Sherry, and Bev, and I got to work, and after my dad’s inspection and approval, painted a wall full of flowers, peace signs, and sayings about the climate. The basement looked bright and cheery, and the wall added a lot of color. Alas, the sentiments on the wall remain relevant today.

Painting the basement when we did turned out to be perfect timing, because in early June, on the day of Allan’s Bar Mitzvah, there was torrential rain. Instead of a luncheon in the backyard tent that my mother had planned, the party moved inside, with various tables set up all over the house. Allan, his friends, and all the kids 13 and under were moved to the basement, where they had a great time in the informal setting and played a lot of ping pong. While I have no photos of my friends and me painting the basement, the Bar Mitzvah candids picked up some of the wall. The following photo shows my brother Allan on the right, with two of his friends, and some of the wall. 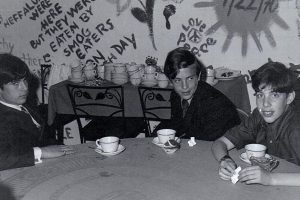 Now I wonder what the buyers thought of that basement wall when we sold the house in 1972 and moved to California. It’s likely been painted over, so I am glad I found photos to preserve that memory.

Given the history of the North Caldwell mob in my story Eco-Freaks Meet the Mob, I can’t resist describing the basement of my friend Bev, who helped paint our basement. Bev lived in the lower, newer part of town. I met her in our freshman year in high school. Actually, she shouldn’t have been at our public school at all, but she’d been expelled from Catholic school. There the girls had to serve coffee to the nuns. As a practical joke, Bev served them boiled root beer, which I thought was hilarious. The nuns apparently didn’t think so.

Bev’s mother was a former nightclub singer, which I thought was really cool. Her father was an attorney, and it was clear, without anything being said, that he represented the Mafia (think Robert Duvall in The Godfather). He didn’t drive, but each morning a large, black taxi-like limo would pick him up and drive him to his office in Newark.

Adriana, Sherry, and I, plus a number of friends from the ecology and drama clubs, often hung out in Bev’s basement. It was enormous and had thick brick walls. The large room was casually decorated but well appointed and included a full kitchen, bath, stereo system, and television. I had not seen a basement finished like that, and it was a completely secure space. Soon I figured out that this basement was perfect for protecting families of those involved with the mob, providing a comfortable sanctuary, and likely being impervious to bullets. Turns out that many of the North Caldwell mob homes had similar basements.

15 Responses to Teen Art in the Basement

A Hero in the Basement
by Dave Ventre