Prompted By A Year in the Life
4 comments. 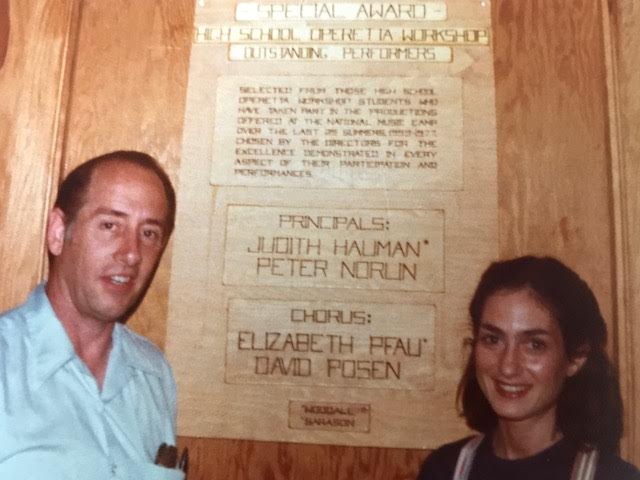 If I may steal from Dickens, “It was the best of times, it was the worst of times”. 2017 had a lot of both, beginning with the still surreal inauguration of the Orange Monster. I keep thinking he has struck a new low, but he keeps surprising me. I made sure to stay occupied and not turn on the TV on January 20. I contrast that to January 20, 2009; Obama’s first inauguration. It was a snowy day in Boston and I was on a physical therapy table, having sprained my knee in a bad fall. A TV was on in the room, but noon came and went as my knee was iced and the ceremony hadn’t started. Nevertheless, I felt hot tears of relief come down my cheeks, knowing that technically, “W” was no longer in charge. As soon as I was done, I rushed home and holed up in front of the TV for the entire day as the snow swirled silently outside; I, cozy on my couch, listening to the stirring words of our new leader. How different I felt this year. My stomach churned as the nightmare began.

From “alternative facts” to “fake news” (as Daniel Patrick Monyihan once said, “You are entitled to your opinions, but there is only one set of facts”), we lurch from one lurid episode to something even more heinous. I thought Charlottesville was awful, with “very fine people” on both sides (as a Jew, with relatives who died in the Holocaust, I have a difficult time calling neo-Nazis, chanting “Jews will not replace us”, “very fine people”, and so should our ignorant leader, with a Jewish son-in-law and grandchildren). But this past week, he talks about poor and ravaged countries as shitholes. He is beyond the pale, irredeemable.

[A side bar to Charlottesville: forty years ago, while living and working in Chicago, I went in to my office at 327 S. LaSalle one pleasant, summer Sunday morning soon after taking my first sales job. I worked for a few hours, then decided to walk the several miles back to my apartment, on the north side. I didn’t know that the neo-Nazi rally, scheduled for suburban Skokie had been moved to Daley Plaza. I walked right into it. I could not believe what I saw. Storm troopers in brown shirts wearing red arm bands with swastikas, giving the Nazi salute. I felt sick and vulnerable. I got out of there as quickly as I could and cried the whole way home. I believe in free speech, but this was hate speech; hateful to anyone who believes in freedom of religion and the rights of human beings.]

His tax cuts, as has been proven countless times, will NOT “trickle down” to help those who need it, but are merely a huge transfer of wealth to those who do not need it, as he was overheard bragging the following weekend to his Mar-a-Lago buddies, “I’ve just made you a whole lot richer”! That’s the name of his game. Our nation has lost its prestige on the world stage and its edge in the global economy. We appear to be running backwards on the issues of climate change, health care, voting rights, education, and equal protection as fast as we can. But enough about how those grifters who are ruining this country. The tide will turn. And the mid-terms are on the horizon. Let’s be positive and work to get rid of gerrymandering, run good candidates at every level, get out the vote and never give up!

Things were much more positive on the home front. Despite a semi-serious gym injury that kept me out of the gym for six months (and at my age, all that nice muscle tone I’d worked so diligently on for five years falls apart far too quickly), eventually got diagnosed properly. I got great treatment on the Vineyard over the summer and was back to my gym routine by the autumn, albeit, with some modifications, as I still get hip and back flare-ups, so I have to be mindful of what I’m doing, concessions to aging and ailments.

I had two fabulous trips this year. As I’ve written about before, through my connection with the Rose Art Museum, which was the Commissioner/curator of the US Pavilion at the Venice Biennale in 2017, I went with a contingent from Brandeis to Venice in May for 5 days. We saw art around that beautiful city for the first few days, then did the vernissage (preview) of the Biennale for the next 3, including attending the most glamorous gala, hosted by our Board Chair at the Cipriani Hotel on opening night. Cocktails overlooking the Grand Canal, gorgeous dining followed by a hot disco; fantastic night! Final cocktail party at the Peggy Guggenheim Museum, then I strolled back alone, across the Accademia Bridge, wandering the streets to my hotel. The light was magnificent. It is no wonder that painters through the centuries have flocked to Venice to paint the exquisite views. 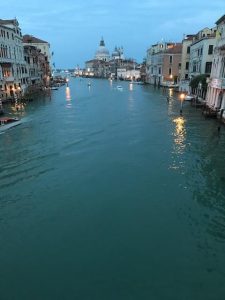 Home in time for the Brandeis graduation of our dear niece, Rae Pfau. We hosted relatives from the mid-west for the weekend and were so proud to add our niece to our alumni base. It was moving for me, after so many years of involvement, to add another family member to our Brandeis family. She went to work for Charles River Labs, not at their headquarters in Wilmington, MA, but at a lab they acquired in Worcester. Nevertheless, we found the hire ironic, as Dan’s father (Rae’s grandfather), worked for founder Hank Foster at Charles River for 30-some years, setting up their germ-free lab over 60 years ago, which was integral to their business at the time. If only Rae’s grandparents had lived to see this turn of events. Rae loves her job.

Late May through Mid-June we went on a fabulous golf cruise to southern England and Normandy. I don’t play golf, so for me, the trip was all about sight-seeing and this particular company does that exceedingly well too. I got to see the Dover Tunnels, where General Ramsey planned and executed the evacuation of Dunkirk. A highlight was a private tour of Highclere Castle, the location for “Downton Abbey” filming, a historic and majestic manor house in the English countryside. Back across the Channel, we were all about the D-Day invasion, spending four full days viewing the landing beaches, Mere Ste Eglise, Ponte du Hoc, Pegasus Bridge, Caen Memorial and several country’s cemeteries: American, British and German. Most moving was being on Omaha Beach at 6:32am, on June 6, just as our brave troops had been 73 years earlier. It felt sacred to be there at that hushed moment, and give thanks that so many were willing to sacrifice so that we could be free.

We had a wonderful summer on Martha’s Vineyard, highlighted by visits by family, friends, even my older son David, in the US from London. He came over to view the eclipse, flew to New York where he has many friends, came up to see us, got sick his last day with us, and was very sick upon returning to New York, winding up in the hospital. It turns out, he and several others had contracted food poisoning at a NYC restaurant, but it took several days to express itself. His trip to see the eclipse fell apart, but was well by the time he had to fly back to London.

Thanks to big brother, our Vicki got a wonderful job in San Francisco. David knew people at OpenAI, an Elon Musk-funded non-profit in the same sector as DeepMind, where he works, and reached out to see if they had an opening for Vicki. They gave her a problem to work on, and a three week contract in June. She took two days to solve the problem. They hired her full-time in August. While she doesn’t know artificial intelligence, they test their theories on gaming platforms, and those she knows and can program very well. One person there said he thought she was the best in the world at what she does! High praise, indeed. She had looked for a job for almost a year and said this is the first time she feels really valued.

The autumn was quiet, just normal living. Going to the gym, rehearsing Mendelssohn’s Elijah, for performance in late January, seeing friends. I got to see both my nephews and my brother and sister-in-law in the autumn, which was a real treat. Dan and I took a lovely trip to New York City, saw “Dear Evan Hanson”, last year’s Tony winning musical and, as my special birthday present, saw “Hamilton”, which I adored! The crowd roared its approval to the line: Immigrants get the job done! Indeed. The show is a marvel, teaching us history in a unique way, the lessons are as fresh today as they were more than two centuries ago. We also got to spend time with several dear college friends. It was an excellent trip.

I turned 65 in December and had a grand day, from the Brandeis Alumni party at the JFK Library (and the Alumni Association called me up in front of 300 people, sang happy birthday to me and gave me a cake and flowers…couldn’t have been nicer), to a lovely dinner with my “birthday twin” and husbands. We discovered long ago that we not only share a birthday, but the exact year. I am 45 minutes older! So we always celebrate together. From there Dan and I went on to cake at my best friend’s house, so I think one could say that I really celebrated. 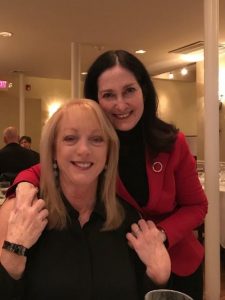 With my birthday twin

My kids and other relatives came in for Christmas and we had a great family celebration, so if one could overlook the political climate, it had been a rather good year. Then on December 30, I got word that Dude Stephenson, my beloved Interlochen Operetta director, teacher, friend and mentor of more than 50 years had passed away suddenly. He was not young and with that in mind, I was making plans to visit him next summer, as I hadn’t seen him since 2003. He lived in San Diego and we would talk on the phone at length. Now it was too late and I was heartbroken. Though he was fading, I thought I still had more time. Instead, I will go back to the pine forest of Interlochen next summer for a Celebration of Life for this man who meant so much to me. The featured photo is of the two of us from 1978 when he named me the Best Female Chorus member of Operetta for the first 25 years of the class (it ran for 50 years). I was honored and touched to be recognized by him in such a way, as he knew all of his students and missed nothing. I will miss him terribly.

4 Responses to The Good, The Bad, Even Some Ugly