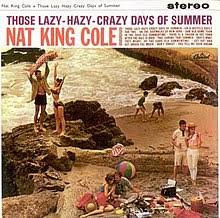 This story has a road rage component, but, by way of full disclosure, it is just one component of a memorable day for which the title seemed quite apt.  Though maybe more crazy than lazy.  In any event, h/t to Suzy for the song/title motif that seems to always work so well for Retro stories.

This story has a road rage component, but... it is just one component of a memorable day for which the title seemed quite apt.  Though maybe more crazy than lazy.

The scene:  late August day the summer before my senior year in college.  Somehow, I have put together a plan for the day involving two pals I worked with that summer at a mental health center in New Haven.  For a national project on mental health “outcomes,” the center had recruited a bunch of college kids to sit around all day reading patient files and “coding” information about them.  (This was pretty much pre-computer; our “coding” was filling out long spread sheets in pencil.)  Anyhow, really great guys; let’s call them Cheech and Chong. (Both were actually Jewish, though one really did look a lot like Cheech.  Or maybe it was Chong.)

So, one sultry Sunday morning, off went Cheech and Chong and Sonny and Cher and moi from New Haven en route to Long Island to first pick up my girlfriend and then head on our adventure. Significantly for this story, there was no way that a group this size could fit in my Karmann Ghia, so my mother had graciously lent me her Chevy Impala convertible, a boat of a car with plenty of room for all of us — plus, as mentioned, a convertible.

After picking up my girlfriend, Cheech and Chong began their tour.  I cannot remember all the sites, but I know that they included a great deli; the home of Sandy Becker, a “famous” TV star who hosted a bunch of kids’ shows on a local NY station; and one of the original Nathan’s hot dog stands.  Then we went to Jones Beach, the quintessential mammoth NY public beach, but also a truly beautiful and well maintained park.  A good time was had by all.

Leaving Jones Beach late in the afternoon, we got caught in traffic on Sunrise Highway which, despite its idyllic name, is a miserable old road (the predecessor to the Long Island Expressway) full of strip malls and traffic lights. And here comes the road rage part.  I was stopped behind several cars at one light when the light turned from red to green.  I hadn’t started moving forward yet as the row had not begun to move, but I had just taken my foot off the brake in anticipation of it.  Coming up behind me, a driver only saw a green light and assumed — wrongly — the row had started moving. So he rammed into my rear and, because my foot was off the brake, I then rammed into the stopped car in front of me.  The guy in the car in front  — a huge guy, and I’m thinking he was a retired cop — gets out and, of course, all he knows is that I have just rear-ended him. Let’s call him Godzilla. Worse yet, as I later learned, Godzilla’s pregnant daughter is in the car with him.  So he is really, really pissed.  Fortunately, I have the presence of mind to say/gesticulate to Godzilla very quickly that I’m not his intended victim, but the guy who rammed into the back of my car is.  So, Godzilla storms past me, I resume breathing, and he starts pummeling that guy.

For better or worse, there is a police car sitting at the intersection where the traffic light is and the cops in it have seen the whole thing.   Let’s call the cops Toody and Muldoon.   This is for better in that Toody (or was it Muldoon?) quickly pulls Godzilla off the guy in the car behind me while Muldoon (or was it Toody?) directs us all onto the shoulder and starts taking down information.  But this is also for worse since, as might be imagined given this scenario of college kids in 1970, there had been a degree of illegal substance usage in our car during the day.  (No wonder the Nathan’s hot dogs tasted so great.)  Quick thinking Sonny, however, had deftly secreted the illegal substances someplace safe and, with the top down, there seemed to be little odor of illegality surrounding us.   So, despite a fair level of paranoia among all of us (that, besides hunger, being another well known symptom), we breezed through Muldoon’s information-gathering exercise and he made clear that only the guy behind me would get ticketed.  And that guy was more relieved that Godzilla wasn’t pummeling him than aggrieved with the ticket, which he knew he deserved.

So we collectively breathed a sigh of relief and were also pleased to learn that my mom’s car, though messed up on both ends, was still quite driveable.  (American cars were built like tanks in those days.)  All good until Cher realized that, in fact, her neck was pretty sore from the accident and so we thought we should head to a nearby ER.  We did so and the rest of us killed time and happily shot the breeze in the waiting room until Cher emerged wearing a neck brace and woozily smiling from the painkillers they had given her. (I guess this is where the “hazy” part of the story kicks in.)  And off we merry pranksters went again, back towards Connecticut.

However, in asking woozy Cher about her experience in the ER, Sonny elicited from her the fact that the young examining doctor had somehow convinced her that she had to remove most or all of her clothing for him to take an x-ray of her neck.  In her impaired state, Cher had complied without complaint. Upon learning this, Sonny went ballistic and started screaming that we had to return to the hospital so he could find this jerk doctor and do some pummeling of his own.  However, Cher convinced him that this was not such a good idea and he calmed down and we continued our drive home.  (To state the obvious, if something like this had happened today, we would all have done everything we could to get this guy’s license pulled, rather than been mildly amused.)

Back in New Haven, I dropped off Cheech and Chong and Sonny and Cher and continued home with my girlfriend, who was going to stay with me for a couple of days before we headed back up to Boston for the school year.  At home, while my mother was unhappy about her car, she fully understood that it was not my fault and she served us a late, lovely summer dinner.  Over dinner, we recounted the day to my mother — to her credit, she was outraged about the ER incident with Cher — and my girlfriend even thanked me for a fun, crazy day with my fun, crazy pals.

18 Responses to Those Lazy – Hazy – Crazy Days of Summer