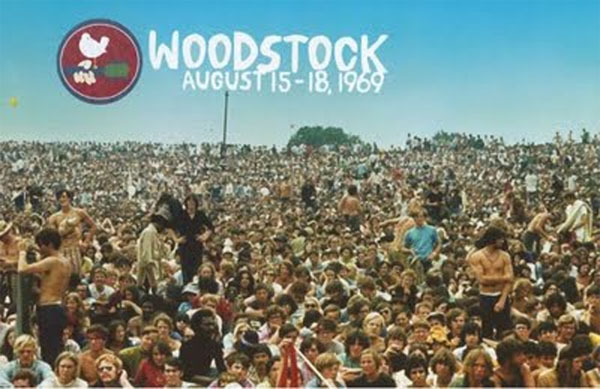 It is the fiftieth anniversary of Woodstock, and for the past week there have been Woodstock stories everywhere I look. Every newspaper and magazine, print or online, seems to have a story written by someone who was there. PBS aired a new documentary last week subtitled Three Days That Defined a Generation. (Does that title seem a little over the top? Was this really the one event that defined our generation?) A new 36-hour box set of CDs, subtitled Back to the Garden, includes “nearly every moment of recorded sound from the festival,” according to the New Yorker review. It is selling for a mere $799.98, and there is a limited run of 1,969 copies (get it?). A Woodstock 50 festival was announced back in January, to be held in nearby Watkins Glen, New York,  but by July it had been cancelled. Too many artists had dropped out, and there were too many problems getting a site for it. The original just couldn’t be replicated.**

I actually spent some time thinking about Woodstock three years ago. The last four paragraphs of this story are a slightly revised version of an earlier story I wrote in 2016 in response to the prompt “Be Careful What You Wish For.” That might seem like an odd prompt to elicit a Woodstock story – the premise was to write about things you wished for, and maybe got, which backfired or didn’t turn out to be what you wanted after all. Instead, I wrote about something I could have had, and turned down, and later wished I had accepted. My apologies to those who already read the earlier story. Although I suspect that, considering our age, and the amount of drugs some of us have consumed, three years later you might have no memory of it anyway.

1969 was the summer after my freshman year of college, and that August was the month I would turn 18. Finally a grown-up for some purposes, although the voting age was still twenty-one then. I was spending the summer in D.C., living with my sister and brother-in-law on Capitol Hill, and working for Planned Parenthood. One of my most vivid memories from that summer was going to see I Am Curious (Yellow) with two college friends, Paul and Bruce. The movie had an X rating, so you had to be 18 to see it. It was early in the summer, well before my birthday. The ticket seller asked Paul for ID, but didn’t ask me. This was good, because Paul was actually 19 and was able to show his ID proving it, whereas I was still 17, and I didn’t have any ID anyway, because I didn’t drive yet. So we all got in to the theatre, no problem, but Paul was really annoyed that they thought I looked older than he did.

What does this have to do with Woodstock? you ask. Nothing. Just setting the scene. Now here comes the Woodstock part.

My boyfriend from high school, Jeff, who was still in New Jersey, got in touch with me in Washington somehow. Maybe he called my parents and they gave him my sister’s phone number. That would be the most logical explanation. Or maybe I had given him the number when I saw him in June. He told me that he had bought two tickets to Woodstock, and asked me to go with him – the titular ticket to ride. I told him I would have to think about it and call him back. I never knew until I started writing this story how much he paid for those tickets, but according to Wikipedia (that fount of all knowledge) they cost $18 apiece. While that doesn’t seem like much money now, it certainly would have then. Indeed, if I had known the cost of the tickets, that might have convinced me to go. I don’t think I knew very much about what the plans for the festival were, and certainly NOBODY knew that it would turn out to be one of the defining events in the history of rock and roll. But I did know that it was three nights camping out in a tent, that it was likely to rain, and that it was going to be a little bit of a hassle getting there, as I would first have to get from D.C. to New Jersey to meet Jeff, and then drive in his old clunker car up to Bethel, NY.

Probably the most dispositive factor was that I didn’t really want to spend three days and nights with Jeff. He had been a good boyfriend for my senior year of high school, but nothing more. He was from my town, but two years older and we had gone to different elementary and high schools, so our paths had never crossed. We met in December of my senior year when the youth group at my temple had a Chanukah party and invited all the local college students who were home for the holidays. He was a sophomore at Rutgers  University in New Brunswick, which was about an hour away. Our first date was on New Year’s Eve, and we went to a party some friends of his were having. We kissed for the first time at midnight, after watching the ball go down in Times Square.

He went back to college, but started coming home to his parents’ house every weekend to see me. We dated for the next six months, until I went to D.C. for the summer of ’68 to work for the McCarthy campaign. When that was over, I was off to Cambridge to start college, and the social whirl there left me not a moment to think about Jeff. When I came back home after freshman year, he invited me to spend a day with him in New Brunswick, where he now had an apartment, so I did, for old time’s sake. It was a little awkward, I wasn’t attracted to him any more, but we ended up getting really stoned and having sex — something he had never been able to get me to do while we were dating, as persistently as he had tried. The sex was not great for me, and I didn’t relish the idea of having to do that for three nights (we didn’t know back then that we could say no), and in a tent in the dirt, no less.

So I didn’t go to Woodstock, and ever afterwards I wondered if I should have gone. I have twice seen the Oscar-winning 1970 documentary made by Michael Wadleigh. The first time was when it came out, in a movie theatre in Cambridge. I was tripping on acid, and thinking that I saw little green men running around on the screen. The second time was forty-five years later, in 2015, on the TV at home, with my husband and kids, totally straight. I wondered if the little green men would still be there. They were not. Watching the movie (both times), most of it looked pretty amazing, and made me regret not going, although there was also a lot of rain and mud, which I would not have liked. My hair would certainly have been frizzy, and that would have made me unhappy. But I think it would have been worth it for the music!

**Note: Right after I finished this story on Friday 8/16, I saw a news item about Bethel Woods Center for the Arts hosting a series of events on Thursday through Sunday, August 15-18. It opened with a Thursday night performance by Arlo Guthrie, followed by an outdoor screening of the 1970 documentary on the very field where it was filmed. Scheduled performers over the weekend are to include Santana and the Doobie Brothers, both of whom were at the original (as was Arlo). If I had known about this in advance, I might have been tempted to go. I was in New York a week ago, it would have been easy to stay. But just like the first time, I didn’t manage to make it to this one.

13 Responses to Ticket to Ride