Prompted By My First Car
5 comments. 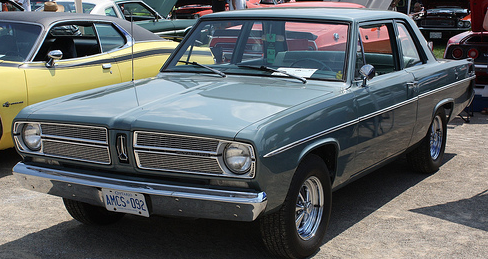 My dad lost his Chrysler dealership, due to bad business deals and the UAW going on strike, leaving him with no inventory, in 1967. My mother’s 1967 Plymouth Valiant was the last car to come from that dealership. I student taught my senior year at Brandeis and needed a car, so I bought it from her in 1973 for $1. Dan, my boyfriend…soon to be fiance, came to Huntington Woods, MI and helped me drive the car back to Waltham, MA for the beginning of the Brandeis school year.

I dubbed it “Tin Lizzy”. It didn’t have much mileage on it, as my mother NEVER drove on a highway. In fact, she barely drove. It was in good condition; bench seats, lap belts only in those days, but I knew nothing about maintaining cars. I was happy to have my own set of wheels and freedom. I student taught in Arlington, many miles from campus, during the gas crisis of 1973 when gas was rationed, and on one foggy morning, couldn’t figure out why traffic was so slow. I finally realized I was in a gas line! I learned to navigate the streets of Boston and Cambridge, which are challenging.

After graduating in 1974, we married and found an apartment in Waltham. After two years we moved to Acton, some 20 miles away. At this point the car was showing wear and tear. Besides automatic steering and shifting, nothing else was automatic and by this point, things were falling apart. The knob controlling the heater had fallen off and been lost, so I went a winter without heat (it never occurred to me that it could be replaced). I didn’t have the car serviced regularly, so the gasket began to go and I leaked oil like crazy. My gas station attendant knew to “check the gas and fill up the oil”. Lizzy met her maker when, in an absent-minded fog, I rear-ended someone on my way home from work in 1977. She wasn’t worth much and was declared a total wreck. I had stitches in my lip, as I flew forward and hit my face on the steering wheel. Dan’s grandfather died two days later, so we bade farewell to two members of family in the same week.