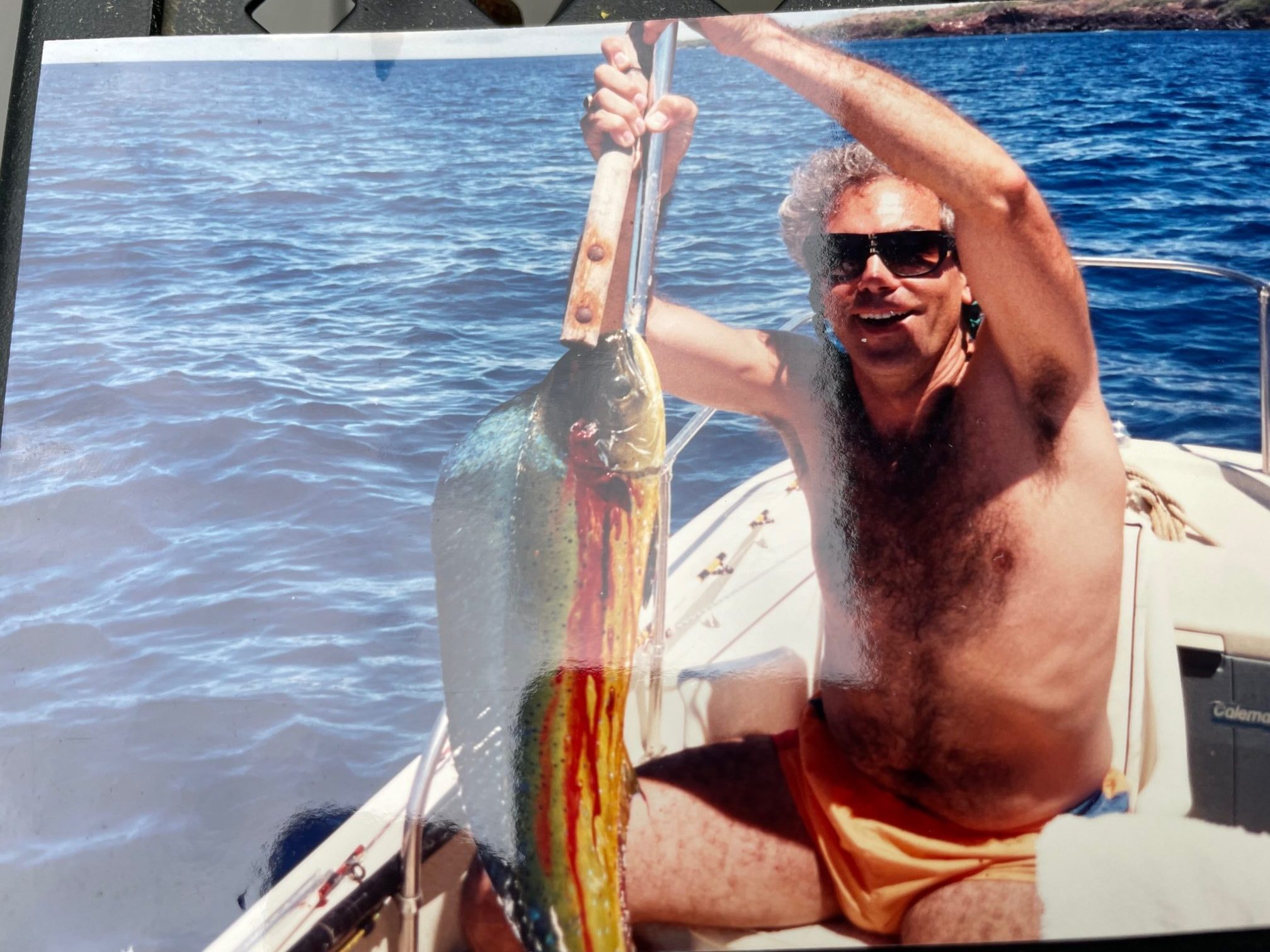 Turning 40 seemed too important to be celebrated only as a one-shot event. The circumstances of my life at that point were not conducive to generating the right kind of spectacular event that seemed to be required.  1989 was four years after the end of my marriage; I was in my third year of sharing the second floor of a triple-decker in the Jamaica Plain neighborhood of Boston with my roommate Dan.  He had found me through an ad in what was called an “alternative weekly newspaper” and that had worked out remarkably well. When I arrived to meet him and see the apartment the first time, I saw The Nation Magazine sitting on his round wooden coffee table—which was not an actual piece of furniture, but a wooden spool designed to hold telephone cable or other heavy-duty wire.  I figured if we both read The Nation and didn’t worry about having trendy furnishings, that was a good start. It was a few weeks later, after I had moved in, that we also disclosed that we had both attended Harvard for our undergraduate degrees—Dan entering two or three years after I finished.

As I made the ascent, I took one bite of apple at a time and challenged myself to see how long I could keep each bite in my mouth before swallowing.

I had been working in a grant-funded position at the Wellesley College Center for Research on Women since 1984, and going out with women that I met through group bicycling or through ads in those weekly alternative papers, or at Wellesley—and once I was quick enough to ask for a date during the time an elevator descended from the sixth to the ground floor. But there were no longer-time prospects for companionship in view. Early in the year, I declared to myself that I would consider whatever good things happened in 1989 to be part of my “40th birthday celebration.” And then in December, when the actual day arrived (the 4th), I would do something. But the pressure would be off to make it exceptional or spectacular, and whatever I did would just be icing on the cake.

My work included considerable travel to give talks or conduct trainings. Two trainings with truly splendid settings took place in 1989: in April, for one full week in Breckinridge, Colorado, and in August, for two full days on each of the four major islands (Oahu, Kauai, Hawaii, and Maui) of the state of Hawaii. 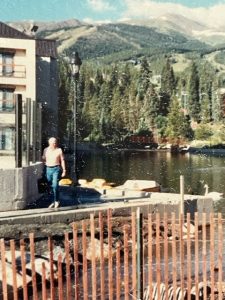 The hotel where the training team and the participants stayed in Breckinridge.

There was a lot of great interaction with our participants, who were educational and youth leaders from across Colorado learning from us about how to set up high-quality afterschool programs to address what was then recognized as a serious problem of “latchkey children”—kids from kindergarten through middle school, going home to care for themselves after school while their parents worked. The discussions were highly engaging, and the personal relations were also very strong. I still make a rhubarb cake from the Colorado Cookbook that the participants gifted me at the end.

The “40th birthday” element of that week was not related to my professional commitments but to the hybrid bike I rented for riding on the paved paths in the Rocky Mountains. More specifically, it was the afternoon I headed out around 3:00 pm, after our seminar ended, to make the ascent of Vail Pass and then down into the town of Vail, about a 40-mile ride altogether, reaching an elevation over 10, 600 feet. (I was climbing about 1000 feet–the difference between Breckinridge and the Pass–the most I had ever climbed at that early stage of my cycling experience.) 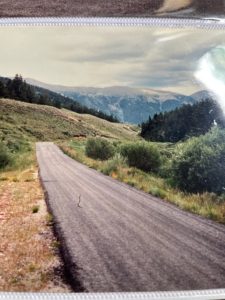 I had grabbed an apple from the front desk of my hotel before I set out.  As I made the ascent, I took one bite at a time and challenged myself to see how long I could keep each bite in my mouth before swallowing. I held some of those bites for several minutes and the apple lasted nearly an hour. Between tha meditative distraction and the abundant wildflowers and vistas, I avoided thinking about the constant uphill grade of the black-topped path.  When I got to the top, I stopped and enjoyed what it felt like to be accomplishing this as part of my fortieth year. Then came a nearly 9-mile descent into Vail: still the longest downhill I have ever experienced on a bike. Waiting for me at a designated restaurant were my training partners; one of them had a pickup truck to transport me and the bike back to Breckinridge. No further mental, physical, or oral exertions would be needed that night. 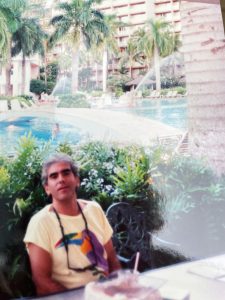 At one of the hotels during our Hawaii training

Many months in advance of the August training in Hawaii, I had arranged my schedule to stay three days extra on the Big Island of Hawaii.  A friend had clued me in to an amazing state park, now called Hapuna Beach State Recreation Area, on the western (Kona) side of the Island, where overnight lodging was available in A-Frames for a pittance, so long as you made the reservation long enough in advance.  I got one, roomy enough to sleep four, and brought along a deflated air mattress, a hand pump, and a sleeping bag. At that time, I got it for &7 per night; I see they are now going for $40 a night for Hawaii residents and $70 a night for nonresidents. You could hear the ocean from the A-Frame; the walk to the beach was about 3 minutes. Happily, our Hawaiian host during the training had explained how friendly and harmless the geckos were, so I wasn’t bothered by the fact that several of them joined me in my quarters.

The participants in our training on the island of Hawaii literally broke into an ovation when I informed them near the end of the two days that I had selected their island over Kauai, Oahu, and Maui for my three days’ vacation, One of them, a director of a town Park and Recreation department, gave me his phone number and requested that I call him so he could take me out fishing. That’s how I ended up catching the mahi-mahi that is depicted in the “featured photo” at the top of this story. 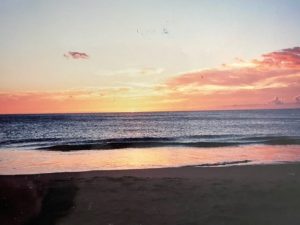 Sunset over the beach near my $7 a night A-Frame. 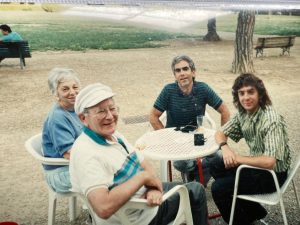 There is so much more to tell about how I celebrated turning 40. After Colorado and before HawaiI, I travelled for four weeks in Europe (England, France, and Italy) for the first time since I had I spent the summer in Brittany as a sixteen-year-old high school student. My brother Hugh and I met up in London, and later, in Florence, Mom and Dad joined us.  Together we visited my French family, and I would see my dear Maman Guidon for the last time. 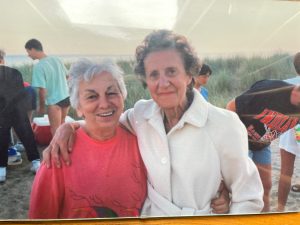 By the time December rolled around, I felt that I had more than honored this milestone birthday. But I wasn’t quite finished. Writing was something that was important to me but often got short shrift among my other activities, Why not devote some time to writing as part of my celebration?  I rented a room for two nights in a Bed & Breakfast in Rockport (on Cape Ann, the “other Cape” in Massachusetts, north of Boston).

I spent several hours each day working on poems and a story.  I loved the hours alone but did not want to be alone for dinner. On the first night, the four members of my men’s group drove up and joined me for dinner. Things were pretty deserted at that time of year, and we found there was enough privacy to turn the dinner into one of our regular meetings, replete with our “individual check-n time” and a topic of our choice. The second night, I invited Don and Hannah, after checking with each of them to ensure they would feel comfortable driving up together from Boston. These were two friends who knew each other, but not very well.  They would end up getting married about seven years later.

On the actual night of my birthday, I made the drive back with a bag of lobsters I had picked up in Cape Ann. I prepared and served lobster to 10 people, including my roommate Dan, in our Jamaica Plain apartment.  I don’t remember what else was on the menu, or even if anyone gave me any cards or presents. (I’m sure that some did, although I’m sure I had requested that they not do so.) I’m also sure there was some kind of cake and the singing of “Happy Birthday.” But I didn’t need cake; I didn’t even need icing on the cake. All I remember is how much satisfaction it gave me to feed them all something delicious. And that it felt good to be forty years old.

On Turning 75
by Mike Repucci