Prompted By That Night
10 comments. 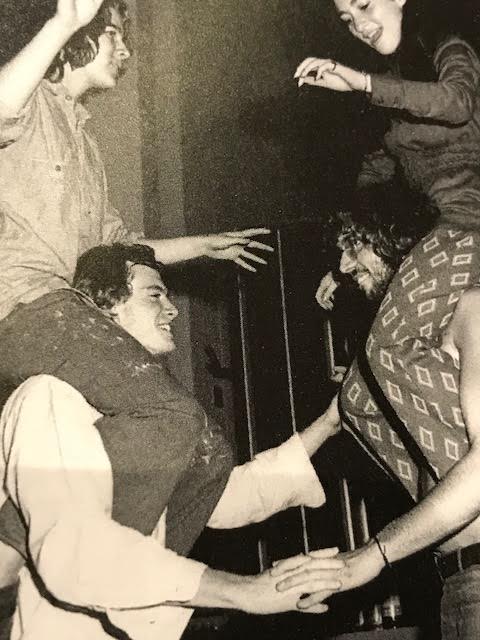 When I arrived on the Brandeis campus in the autumn of 1970, it did not have a student union, though one was under construction. We were the last class to use the old mail room. Our new student union, “Usdan” officially opened on November 1, 1970. The night before, with barely any furniture to get in our way, the entire building opened for the first ever “Usdan Lives”, an all-night party full of music, booze (including a punch-bowl mixed up by Mike “Moose” Cole, forever known as Moose Punch…delicious and toxic), drugs and dancing; a tour-de-force of fun. This became an annual event during my years at Brandeis, but the first was special. The fact that it was on Halloween heightened the fun.

I was dating a red-headed junior – Gordon. He lived off-campus in Waltham and had a car. That night, we met at the party, got drunk (or stoned…can’t remember, but we were definitely high and not just on life) and ran around, inspecting every nook of the spanking new building. The music blared, both live and taped, orchestrated by a DJ. We danced in the new ballroom. I love to dance and was famous for it. Guys lined up on the edge of the stage to watch me.

I found this Featured Photo in the Brandeis archives while putting together a presentation for my 25th reunion. I was looking at a small negative, wanting a photo from that night. Only after it was developed did I realized the girl on the guy’s shoulders on the right of the photo was ME (not with Gordon)! I don’t recognize anyone else in the photo. Dig the pants…I had a vest to match. It was a wild night during a wild era.

Food was available in the cafeteria downstairs. People were everywhere. Everyone was checking out the stairwells, the lounges…what led where. The mailroom was across from the cafeteria, a game room with pinball, fooseball, and pool table behind that. It was all so fresh and wonderful. We felt like we were in a dream state (even beyond the drugs). It was fun to explore, unimpeded. We ran into friends around each turn. Offices, like the radio station and newspaper, that would become useful in the days ahead were locked up tight.

Within a few weeks all the furniture was in place and the large building became a hive of activity. We used it as a place to rehearse our Gilbert & Sullivan Operetta, get food at all hours, play in that game room, get our mail, even send intra-campus notes, get tickets to up-coming events, see movies, both classic (Wednesday night) and new releases (Fridays), see live concerts (wearing that same outfit, I saw Leonard Cohen in the Ballroom later that year).

That year, the building was open 24 hours a day, a refuge for the insomniac or late studier with a noisy roommate. I tired to navigate there, knowing there was a friendly guard to help, when charmed/threatened after a long tech rehearsal by someone claiming to be Jack Warner’s (the studio mogul) son, I got into his car to “talk”, but he drove right by…a story for another day. I lived to tell the tale. It was in that cafeteria that I fell for the man who would become my husband, wearing a blue ruffled shirt and tuxedo for Casino night. I also ate early that night, before opening night of “Guys & Dolls” and sought him out after my curtain call, telling mutual friends of my interest.

The party did go throughout the night. Slowly kids headed back to dorms or other housing. Gordon took me back to his apartment. We got a little sleep. When we awoke, he make me steak for breakfast and took me back to my dorm. I had experienced an amazing night of revelry, christening our new building.