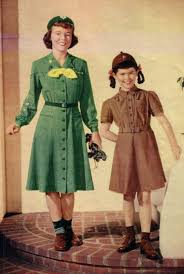 Being a Brownie was an unquestioned part of being a midwestern girl of the fifties.  On meeting days, we would wear a (yes—dorky) brown dress and beanie hat to school which showed you were in the club.  I don’t remember much of what we did at those meetings but do recall one of the songs: “I’ve Got Something in my Pocket” (I’ve got something in my pocket that belongs across my face.  I keep it very close to me in a most convenient place.  I’m sure you would not guess it, if you guessed a long, long while, so I’ll take it out and put it on—it’s a great big Brownie smile!).  On the last line, we would put our hands in our pockets, pull them out and wipe them across our mouths, leaving the eponymous smiles on our faces.

I’m sure you would not guess it, if you guessed a long, long while, so I’ll take it out and put it on—it’s a great big Brownie smile!

After Brownies, we “flew up” to become Girl Scouts (green uniforms!) in a bizarre ceremony that centered around a fable involving a house-cleaning elf.  Where, oh where, could the girl find the elf (brownie) who would clean up their messy house?  According to the myth, a brownie is “a magical little creature who slips into houses very early before anyone is awake.  It tidies toys, folds clothes, washes dishes, and does all sort of helpful things.” The girl hoping to fly up would reenact a story of searching for the brownie, that culminated in looking into a mirror (ersatz pond) on the floor and reciting a poem that went something like this: “Twist me and turn me and show me the elf. I looked in the water and saw . . .myself!!”   The clear lesson was: it was our job to clean the house.  Not that there is anything wrong with any kid helping around the house, but ouch!

Scouting was supposed to have outdoor activities, but ours were pretty limited, despite the promise of somewhere in Switzerland: “High up, high on the mountain, we founded our chalet.  It’s sloping roof and wide will shelter us without a care, and each Girl Scout and Guide will find a welcome there”.  Our highlight was going to East Lansing city park, a large flat lawn with scattered trees and picnic tables.   We sang, “I Love to go a-Wandering Along the Mountain Track” as we carted coffee cans filled with tuna and noodles and mushroom soup to our circle of wooden tables.  The cans were garnished with the best part– potato chips—then placed in a barbecue pit, and voila! Before too long we were eating charred tuna noodle casserole.  I don’t recall we stayed overnight, but it did get dark, and we cooked marshmallows on sticks over the coals, experimenting with the patient slow- golden-brown approach versus the faster light-them-on-fire technique, then smashing them between graham crackers and Hershey chocolate bars into S’mores and eating too many before the end of the Big Adventure.

Of course, cookies were an essential part of scouting—we were expected to sell them every year.  We were supposed to go door-to-door, keeping track of who ordered what, and delivering them weeks later.  I was terrible at sales, but liked eating, especially the peanut butter oatmeal “Savannahs”.

Somewhere in grade school I fell away from scouting, but, curiously, took it up again in seventh grade when I lived in Dacca, East Pakistan.  There wasn’t much in the way of extra-curricular activities, and one of the ex-pats started up a club.  We didn’t have uniforms, but made some sashes where we sewed on merit badges.  I recall ones for sewing and embroidery.  And there it ended.

In all fairness, scouting has evolved from the early twentieth-century days.  In the US, the founder was Juliette Gordon Low, a socialite who patterned Girl Scouts after Lord Baden-Powell’s Boy Scouts in the UK, and it spread worldwide.  Google reports some of the twists and turns of the organization, including competing with the Campfire Girls, which were sponsored by head of the American Boy Scouts, and were designed to be more domestic and less threatening to the boys’ organization.  I was happy to find that the Brownies no longer use the old elf story for fly-up, but they have “bridging ceremonies”.  The Girl Scouts organization remains overall secular and has addressed race and gender issues—but anything that aims to empower girls has the potential to ignite culture wars. I met a woman in the early 1980’s who tried to promote scouting in the religiously conservative state of Utah, where they ran into strong opposition.  She maintained that Utah had the highest per capita enrollment in the Boy Scouts, but the lowest per capita enrollment in the dangerous Girl Scouts.

In any case, those ancient scouting songs have lodged in my brain, taking up valuable memory space somewhere between the nursery rhymes and songs of the sixties.  When I got a little Swiss chalet music box, wouldn’t you know it would plink out the tune for, “High up, high on the mountain”?  At which point, the rest of the words played in my mind without fail.  And when I actually do go a-wandering along a mountain track, I carry the refrain, “Val-de-ree, val-de-ra, val-de-ree, val-de-ra-ha-ha-ha-ha-ha, val-de-ree, val-de-ra, my knapsack on my back.”