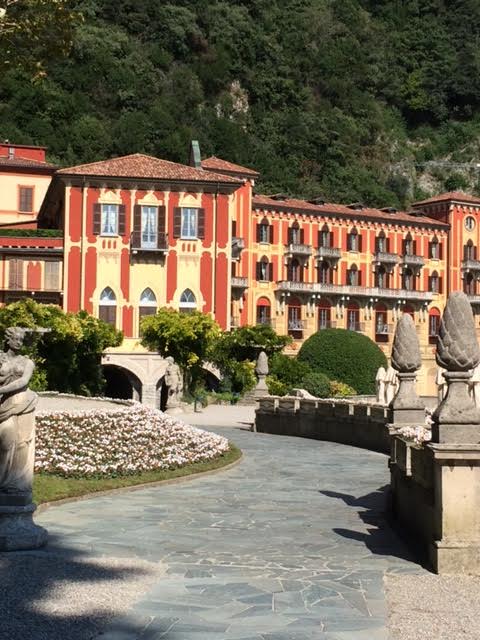 When I was a child, we traveled mostly to visit relatives and stayed with them. Starting in 1959, we did spend one week in August for five summers up in Charlevoix, a very nice resort on Lake Michigan in northern Michigan. 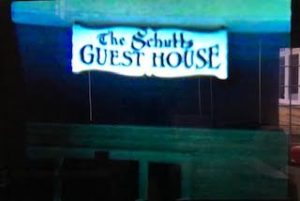 We stayed in The Schutts Guest House, a large house with a broad lawn run by the most wonderful woman. This had been her family home, but with everyone grown and gone, she turned it into a guest house, with several rooms to rent. Most of them had some form of private bathrooms too (the tubs were cast iron with the old claw feet). Some rooms had closets that had been turned into tiny bathrooms with showers so small, one could barely turn around in them. There were two large rooms on the ground floor. Three unmarried sisters rented those out each season.

On rainy nights, all the guests would gather in the living room. Mrs. Schutt made braided rag rugs. I helped her braid them in front of a roaring fireplace. I’d bring out my Barbie dolls for all to admire. Everyone was friendly. It seems idyllic to look back on it now; men reading the papers, women reading books or knitting, some small talk, or engaging with little me.

Since my family had young children (my brother started at the National Music Camp in Interlochen, about an hour away, in 1961, so only joined us for two summers), we were given kitchen privileges; we could keep milk, cereal for breakfast and cookies there for an after-dinner snack. Sometimes, if I was lucky, Mrs. Schutt’s grandson, George, would visit while I was there. He was about my age and was a great playmate. We’d run around in the large backyard and have a great time together. I have very fond memories of our weeks at the guest house, except for the night of all the commotion outside our room. The transom window was open and there was a lot of hollering. Rick finally got up to see what was going on. Lots of running around with a long broom trying to chase out a bat! Gracious! 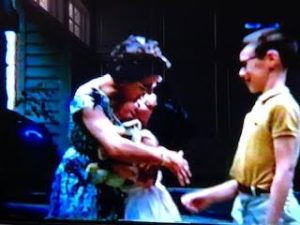 A warm farewell from Mrs. Schutt at the end of one our visits. (This shot is taken from old film, transferred to video, then DVD, so not very clear.)

After Dan and I married, we had little money for travel. Eventually, we traveled a lot for business, but I never stayed at any place fancy, unlike my husband, who always stayed at the Waldorf when in New York, once even in the Presidential Suite!

We saved up for our first big trip to Europe in 1983; to London and France. We stayed someplace minor in London, but at the fabulous Hotel George V on the Avenue George V in the heart of Paris. That was grand! Later, we traveled through the Loire Valley and stayed in an actual chateau, once owned by the Coty family, makers of the perfume brand. 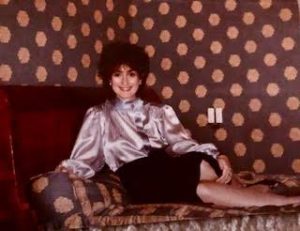 We had decided to take the Hover Craft back across the channel. We drove north through driving rain, visiting a few spots until we reached Calais on the English Channel. We did not have reservations and there were only three hotels in town. We went from one to another. No room, no room, finally the worst hotel had one, tiny room for $19! There was a bed that we barely fit in. We put our suitcases on a rack at the foot of the bed. There was no room left to turn around. Behind a plastic curtain was a wash basin that stank. Clearly, lazy folks who didn’t want to use the communal bathroom in the hallway had relieved themselves in this sink and it didn’t get cleaned often! From the sublime to the ridiculous. But it was the only bed available in town, so we took it, barely slept and got out without bedbugs.

We’d gotten a taste of the fine life and we liked it.

After our children were grown, we took three fancy golf trips, which were primarily cruises, but one, which was a trip through the Riviera, had an extension to Lake Como, which we also booked. We stayed at Villa d’Esta (the Featured photo), the most beautiful hotel we’ve ever seen. Not only is the interior all marble, gorgeous crystal chandeliers and floral arrangements, but the views out to the lake are stunning. The veranda, where one can order food or just enjoy a drink, overlooks a pool that is suspended above the lake. 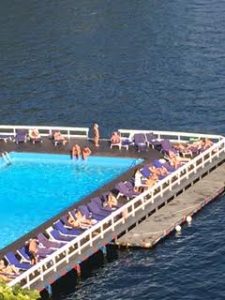 The grounds are magnificent, between the various gardens, statues and terraced views out to the water. Just stunning. We ache to return. 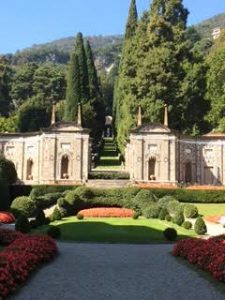 With the birth of our granddaughter in London, we now spend a lot of time there. London has many fine hotels (and more being built). We spent 28 days there in December, between wanting to be there for my birthday (December 10), and waiting for the baby’s birth (who of course came a week late). Even with pandemic-depressed rates, we weren’t going to pay for 28 days at a fancy hotel. Instead we used Hilton points and stayed at a DoubleTree (which Hilton owns) that was next to Victoria Station.That would have been convenient, had it not been for Omicron, which peaked during our second week. We stopped taking public transportation altogether. Thank goodness, vaccination rates are high there, so we took Ubers to and from our son’s home, less than 4 miles from the hotel. 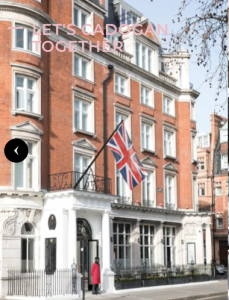 On our second visit, in February, we were only going for six days, so decided to live it up a bit. We had wandered through lots of neighborhoods and eaten at several restaurants we liked a lot during our first visit two months earlier. One was LaLee, named for Lillie Langtry’s private railroad car. It was the dining room of the Cadogan, in Chelsea; a very nice neighborhood and a recently renovated, elegant boutique hotel (Langtry had lived there at some point in her life, as had Oscar Wilde). We treated ourselves and stayed there on our most recent trip. It was wonderful; excellent service, heavenly bathrooms (heated toilet seats!), quiet, posh, just lovely.

But the world turns, terrible events cause havoc and treats like that are off the table right now. It was fun while it lasted.