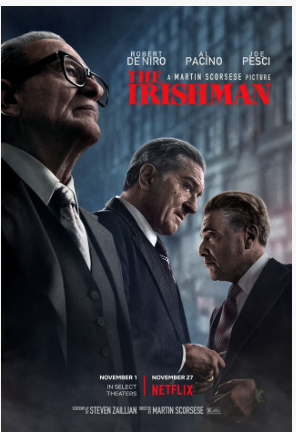 We see lots of movies throughout the year; this year we even attended three film festivals, though many of those films tend to be foreign and never find distribution. We eagerly await this time of year when the “prestige” movies roll out. When I saw the Golden Globe nominees, I was reminded of some good movies we saw a few months ago that made my list:

Judy; Though not the finest film of the season, Renee Zellweger really captures the final days of Judy Garland, her desperation, continued strength as a performer and utter sadness as a human being.

Once Upon a Time…in  Hollywood; Perhaps Tarantino’s best movie (if you like his movies), this truly captures a moment in time (1969), great acting, visually arresting, less bloody than most of his films and the shot of nightfall as the lights of Hollywood come alive is stunning.

Parasite; A Korean film, winner of the Palme d’Or at Cannes this year, is a sly black comedy of class struggles with poor people insinuating themselves into a wealthy family’s life with tragic consequences.

Ford v Ferrari; Based on a true story, Henry Ford II decides he wants to win Le Mans, hires someone to design the car (based on the Mustang platform) and hire the racing  team to do that. Complications ensue. Excellent performances by Matt Damon and Christian Bale. Good human interest story even you don’t care about auto racing.

Dark Water; Based on a true story, a newly minted partner in a Cincinnati law firm that usually defends companies that pollute spends 20 years pursuing justice for a farmer in West Virginia whose water (and land) is polluted by DuPont (Teflon). Starring Mark Ruffalo and Tim Robbins.

The Irishman; (we streamed on Netflix), a very long masterpiece directed by Martin Scorsese, starring his usual cast of characters: Robert Di Niro, Joe Pesci, (first timer with this ensemble) Al Pacino as Jimmy Hoffa. Based on a true story of mobsters and Teamsters, masterful acting. As a native Detroiter, I related and remember well the day Hoffa disappeared. My friend Christie and I were on our way driving from Detroit to Interlochen, MI for the first of many visits to the National Music Camp in August, 1975 when Hoffa went missing. We joked that we did it. Hoffa was last seen at Machus’ Red Fox, a very nice restaurant in its day. I had a date from hell there once while in high school with a guy I had actually liked until that fateful date.

Marriage Story, Very tough, beautifully acted story of the break-up of a marriage starring Adam Driver and Scarlett Johansson. He’s a New York-based director, she’s a native Californian actress who comes east, makes a name acting in his productions, gets a TV series back in LA, takes their son with her and things dissolve. I smell Oscars.

Harriet;  Bio-pic of Harriet Tubman, the run-away slave who escapes to freedom, and keeps going back south to free other slaves. Though a great and not well-enough known story, I found the movie not as engaging as I wanted it to be, given how dramatic the subject is.

A Beautiful Day in the Neighborhood; Not the story of Fred Rogers (the documentary from last year already did a great job with that story). Rather, this is the true story of an investigative reporter Lloyd Vogel (Matthew Rhys) who has a difficult relationship with his father and is coming apart emotionally. He is assigned to do an interview with Fred Rogers  (Tom Hanks, who does a good job getting the mannerisms and speech pattern down pat), as part of a magazine series on “heroes”, which is not his cup of tea. He is skeptical that anyone could be so kind and understanding. Of course, the relationship changes both for the better. One can still find Lloyd’s article on-line (it was supposed to be 400 words, but expanded well beyond that).  A solid movie.

The Report; (streamed on Amazon Prime), The true story of Dianne Feinstein (Annette Bening), as chair of the Senate Intelligence Committee, authorizing a young FBI agent (Adam Driver) to investigate the use of “enhanced interrogation techniques” on captured suspects in the aftermath of 9/11. He, along with a very small team, spent 6 years exhaustively researching and concluded that Americans tortured the detainees and got no good intelligence for their efforts. Though we know much of what was done, this gives the details of how and what eventually became public. Particularly at this moment in our nation’s history, getting the facts right feels very important.

Knives Out; All-star cast headed by Daniel Craig sporting a Southern-fried drawl. Very entertaining who-done-it with lots of plot twists, filmed around Massachusetts (as an added bonus for we locals).

I am very much looking forward to the new version of Little Women, out on Christmas Day.

10 Responses to We Love Movies

The Irishman
by Dana Susan Lehrman

Burning Down the House
by Suzy