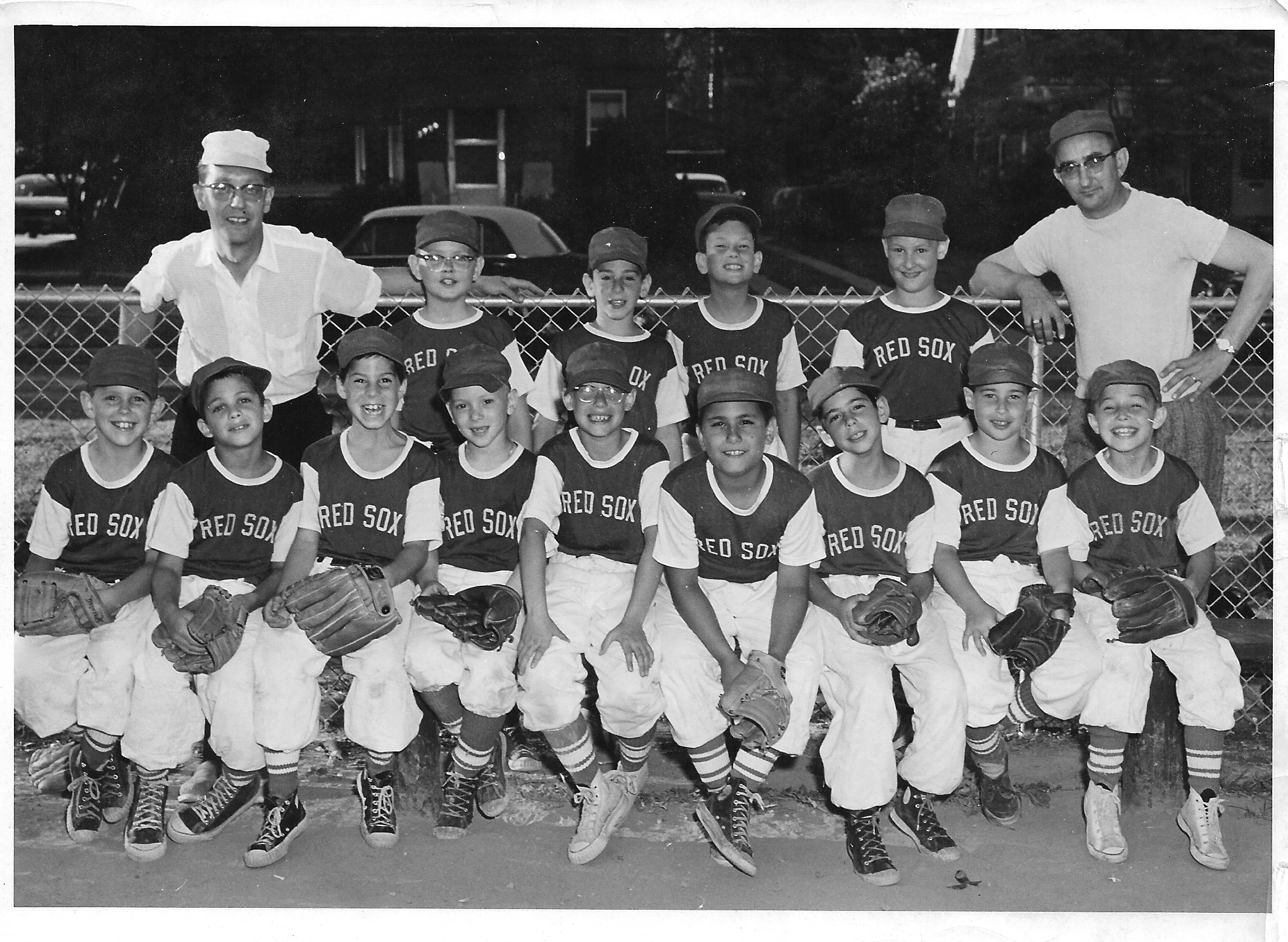 My Little League team, age 8. I’m in the front row, second from right. I can still identify most of my teammates and one coach.

I was a baseball fanatic; I lived and breathed the sport. In this I was schooled by my father, who bought me my first glove as soon as it would fit on my hand, and tutored me in throwing, catching, hitting, and fielding. When simple catch wasn’t challenging enough, he made up a game called “Against the Steps” in which one of us would bounce a rubber baseball off our front porch steps and the other would field it (repeatedly fulfilling my mother’s warning that we would break the storm door window). After school in spring or during the day in summer, I would play baseball with my friends at the empty lot a few doors down, next to the Krafts’ house, until it got dark or my mom would call me in to practice the piano. (We broke the Krafts’ windows, too.) When I was old enough to play little league, I practiced fielding ground balls until I became starting second baseman. My glove was autographed by Tony Kubek of the hated Yankees, but it was the only second baseman’s glove available. My older friend Jeff showed me how to oil it and break it in. During the season, I was so excited I could barely breathe between games. Even after losing his leg to cancer, my dad coached the team on crutches. 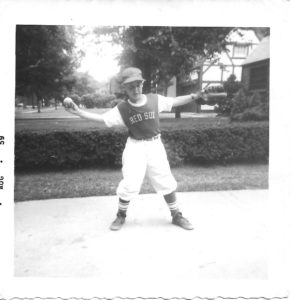 Showing off my form in the front yard.

I told them I was only eight, but I promised the announcers that when I was older I would drink Stroh’s beer and use Speedway 79 gasoline.

Like my father, I was also a rabid Detroit Tiger fan. In summertime I would lie on a webbed chaise in the back yard, nursing Faygo rock-and-rye pop and listening to Van Patrick and Mel Ott call the games on the radio. Our garage door was designed with recessed squares, each about the size of a strike zone, so I would practice pitching. Then the ball would bounce back and I would practice fielding. (Later, when we installed a basketball backboard above the garage door, my brother and I would play “Against the Backboard” with a tennis ball. This resulted in fewer broken windows but, when we missed, the ball would fly over the garage and into the neighbor’s yard.) When the Tigers played at night, I would fall asleep with my transistor radio under my pillow. My parents once took a weekend trip to Chicago to visit my grandparents and happened to stay at the same hotel (the Del Prado, yes I remember) where the Tiger team was staying while playing the White Sox at Comiskey Park. They induced several Tiger players and coaches to autograph a menu for me, a menu I kept for years.

As a special treat, my dad would take me to Tiger ballgames at Briggs Stadium. He always bought a program—as every fan knows, “you can’t tell the players without a scorecard”—and he taught me to keep score. He had his own scoring system, different from the “official” one in the program, but I adopted and embraced it. I saved those programs for years, too. When they saw how much I enjoyed it, they bought me a blank scorebook so I could keep score at home as well.

Despite the fact that my father had taught me the scoring system, around age eight I got the idea that one facet of it wasn’t right. (I have no recollection what facet that was.) But when I told my father, and presented my idea for a better way, he refused to accept it. That galled me. I knew my way was better. I stewed about this for days.

Finally I sat down at the desk in my bedroom and wrote a letter. “Dear Mr. Patrick and Mr. Ott,” I began. I explained the dispute as best I could and asked them to resolve it in my favor. Then, hoping to curry favor, I told them I was only eight, but promised that when I was older I would drink Stroh’s beer and use Speedway 79 gasoline, the two sponsors they flogged endlessly during those games.

Now, where to send it? I had no idea. I ended up giving the letter to my parents and asked them to send it. They read it over and, somehow keeping a straight face, said they would.

A few weeks later, I had not heard back. When I asked my parents, they confessed they had not sent the letter. I’m not sure they gave a reason and, if they did, what it was. Maybe they were laughing too hard. Somehow I accepted it, and life went on as normal. I’m convinced that, when we finally clean out my mother’s basement, I’ll find that letter—which would be a much better outcome than if they had actually sent it. Maybe I’ll find those programs and that menu, too.

Years later, back in Michigan visiting my family, I actually drank a bottle of Stroh’s beer and filled my rental car with Speedway gasoline. So, you see, I kept my end of the bargain.