1968: From the Reactionary South to the Revolutionary West by Lou Moffett
10
(10 Stories) 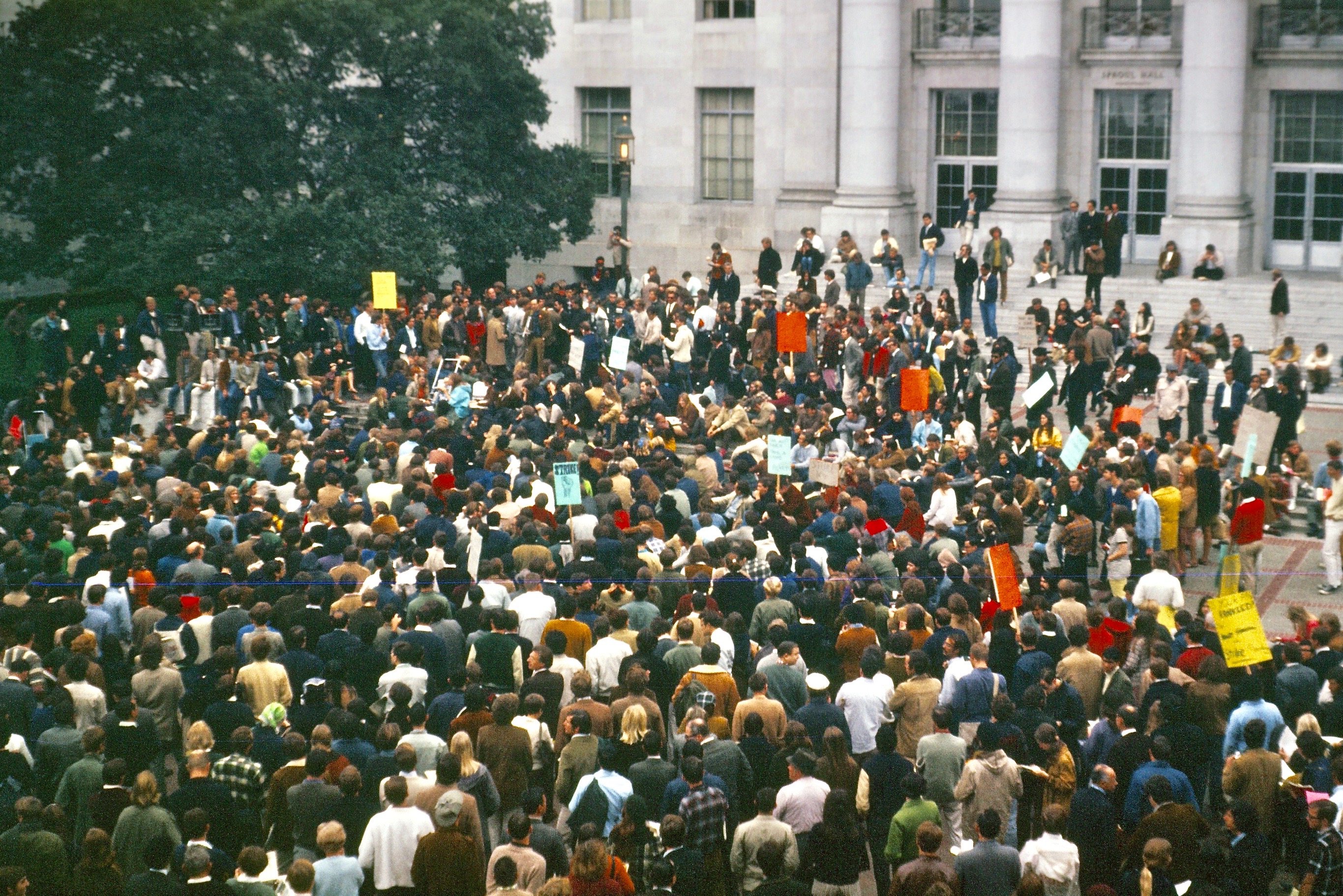 “You say you want a revolution...we all want to change the world,” sing the Beatles.

In Vietnam, the Battle of Khe Sanh rages, and then the Tet Offensive results in the highest U.S. casualty rate of the war.

I begin my final semester at Louisiana State University in Baton Rouge.  With only 1 hour of credit needed to graduate, I take independent study and accept a full-time job as an American History teacher at a high school located in a very conservative, working-class section of the city.  Inspired by having been transformed by my own high school and college education and having recently seen To Sir with Love(1967), I aspire to introduce these students to new ideas and perspectives.  I am to teach juniors the period from the Civil War to the present.

Secretary of Defense McNamara concludes that the war cannot be won and resigns.

I explain the theory of evolution in the context of introducing social Darwinism. Students are mostly curious, but some parents become quite upset.  The uproar settles until I introduce Marxist ideology and even have some students read The Communist Manifesto.

At My Lai, U.S. infantry slaughter over 300 unarmed men, women, and children.

I invite a Marine recruiter to attend my history class, and we debate the legitimacy of the Vietnam War.

At Columbia University, Students for a Democratic Society occupy buildings in protest of the Vietnam war and of racism.

The high school had only integrated that year, admitting two Black students, both juniors.  On the first day of class after King’s assassination, a male White student proclaims that King “got what he deserved.”

I invite a Black minister to address the students on civil rights.  When the minister enters the classroom, a few male White students stand up, leave, go to the principal, and insist that they are not going to listen to such a speaker.

In Paris, millions join Sorbonne students to march in protest of university sanctions.

In Bonn, West Germany, 30,000 students march in protest of the government’s proposed restrictions on civil rights.

I am only a few years older than the students I teach.  The senior girls recruit me to serve as the groom in the school’s fashion show.  The principal invites me to continue as a teacher for the next year.  I decline.  This teaching experience is the hardest job I have ever had, and I am more motivated than ever to be student again myself and begin graduate school.  I graduate from LSU, and my parents give me a brand new 1968 VW bug at a cost of $1,968.  (See my story Blue Bug, November 16, 2017.)

In Los Angeles, Robert Kennedy, after winning the California presidential primary, is assassinated.

In Iraq, Saddam Hussein participates in a coup that brings a new party to power.

The Beatles sing, “You say you want a revolution…we all want to change the world.”

In Chicago, at the Democratic National Convention, 23,000 police attack 10,000 antiwar and political protestors, polarizing the nation’s youth and the conservatives even further.

I drive solo cross country from New Orleans to Berkeley in nine days, camping every night except for one night in a Hollywood motel, for a total cost of $103. I arrive in Berkeley in the afternoon and park within a block of campus.  Before I can get out of my car, someone puts a flyer on my windshield announcing a student protest rally to be held on campus in the next hour.  I attend, the first of many.

Classes will not begin for a few weeks, so I take off to Yosemite for my first visit and first backpack.  On the way I pick up two hitchhikers, college students from Chicago who had just come from the Grant Park protests.  They decide to join me on my backpack. We are novices.  I carry an Army surplus daypack with a sleeping bag tied on, flopping as I hike.  That night we are awakened by bears tearing through our gear for food.  We make a fire, hoping to discourage the bears, but to no avail.  They continue to visit throughout the night, and by morning they have eaten all of our food.

In Atlantic City, radical feminists crown a sheep “Miss America” and toss bras, girdles, and hair curlers into the trash in protest of the Miss America beauty pageant.

In Berkeley, in line at a McDonalds, I hear the staff address the Black customer ahead of me as “Sir.”  I am stunned, realizing that in the South I had never heard a Black man addressed as “Sir” by a White man.

I join an encounter group of eight strangers who meet weekly to exchange “feedback” in the here-and-now (i.e., to tell a person how you honestly perceive him or her in the present). This kind of interpersonal communication is truly revolutionary.  It violates every norm of my Southern etiquette.

In Mexico City, 5,000 students protest university policies, and the police and army shoot into the crowd, killing hundreds.

At the Mexico Olympics, Bob Beamon breaks the world long jump record by 21 inches, a record that will stand for nearly 23 years.  Dick Fosbury wins the high jump with a new style, the “Fosbury flop,” the technique adopted by all high jumpers ever since.  On the victory platform, during the U.S. national anthem, African American track medalists Tommie Smith and John Carlos stand barefoot with bowed heads and raise black-gloved fists in protest of racism.  Later, African American boxing medalist George Foreman waves an American flag in celebration.

In Oakland, I walk through a gauntlet of protestors as I arrive for my draft physical.

After the physician completes his examination of the group, one young man calls attention to his club foot, a condition the physician apparently had not noticed.

In Epperson v. Arkansas the U.S. Supreme Court rules that schools cannot ban the teaching of evolution because it would violate the constitutional separation of church and state.

Apollo 8 astronauts orbit the moon and photograph the Earth beyond the moon’s horizon, placing the Earth as a small blue planet in the vastness of space.

Zero Population Growth warns of the danger overpopulation poses for the environment.

In the U.S., income inequality across earners is the lowest is has been and will ever be throughout the century and to this day.

I return to New Orleans, somewhat a stranger in my own land.  I marry my college sweetheart.  We honeymoon in Biloxi, Mississippi and drive back to Berkeley, stopping to see the Grand Canyon for the first time.

In this one year, I am transformed.  There is another world beyond my Louisiana life, a world with an open, experimental culture: progressive, humanistic, optimistic, with few traditions to protect, and a readiness to question authority.  This culture is nestled in a land of pleasant weather, mountains, ocean, atop an unsteady ground about to crack open at any moment.  Here is a better fit for me.  Still, I miss the food.

One Response to 1968: From the Reactionary South to the Revolutionary West