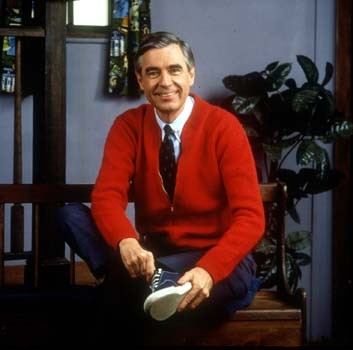 Fifty years ago, on February 19, 1968, one of my personal heroes, Fred Rogers, launched his children’s show, Mister Rogers’ Neighborhood. The PBS program, featuring a kindly man in a cardigan and blue sneakers, introduced millions of young children to the concepts of patience, kindness, acceptance, and caring for their neighbors.

Fifty years ago, on February 19, 1968, one of my personal heroes, Fred Rogers, launched his children’s show, Mister Rogers' Neighborhood. The PBS program, featuring a kindly man in a cardigan and blue sneakers, introduced millions of young children to the concepts of patience, kindness, acceptance, and caring for their neighbors. 1968 was the beginning of a frightening time that felt much like life does today in 2018. Perhaps this is why people weep at showings of Won’t You Be My Neighbor.

Against a backdrop of the turbulent times of 1968, Mr. Rogers preached comforting lessons:

There’s only one person in the whole world like you.

We are all deep down the same.

We all long to be lovable and capable of loving.

You are my friend – you’re special to me.

The adults in your world will take good care of you.

Aside from getting married that August, 1968 was one frightening year. I watched in horror as the war in Vietnam raged on. The politician I detested most at that time, Richard Nixon, was running for president. The ray of hope represented by Eugene McCarthy’s and Bobby Kennedy’s campaigns, resulting in President Johnson’s decision not to seek re-election was extinguished by the assassinations of Martin Luther King and Bobby Kennedy. Our country experienced the greatest wave of social unrest since the Civil War.

I returned from my honeymoon to watch the Democratic National Convention during which protestors were beaten and jailed by Chicago’s finest under the direction of Mayor Richard J. Daley. While protestors chanted “the whole world is watching,” Hubert Humphrey and Ed Muskie were nominated. At the Olympic Games in Mexico City, U.S. Olympian medal winners in track, Tommie Smith and John Carlos raised black-gloved fists in a black power salute during the medal ceremony. That angered as many people as Colin Kaepernick taking a knee during the national anthem. And to top it off, Richard Nixon was elected President.

Bring up my three young children under the cloud of Nixon’s presidency and the ongoing war, Mr. Rogers provided an important reminder of our sacred obligation to raise children in an atmosphere of kindness, acceptance, and respect. Fifty years later, we live in a similar, or arguably worse, era. Children, whom it is our sacred duty to protect, are now pleading with Congress and POTUS to keep themselves safe from being shot in school. We are long past the time when thoughts and prayers are enough to comfort children who are afraid to go to school. Migrant children, who were separated from their parents with no plan to reunite them, languish in shelters. And social unrest is arguably greater than in 1968.

Before his death in February of 2003, Fred Rogers gave sound advice for parents grappling with how to shield their children from fearful events. During the Gulf War in 1990, Mr. Rogers made a public service announcement that told parents, “Children aren’t responsible for wars. The least, and the best, we adults can do is to let our children know that we’ll take good care of them, no matter what.” In response to the Columbine High School massacre almost nineteen years ago, he said, “Children need to know that the adults in their lives will do everything they can to keep them safe. It doesn’t mean we’re always going to be successful, but it does mean we are going to try.”

Perhaps very young children can be reassured by promises to take good care of them and keep them as safe as possible. Perhaps they will respond to being reminded, as Fred Rogers’s mother told him when they learn of frightening events, “Look for the helpers. You will always find people who are helping.”

At what age are these words not enough? Sadly, children now participate in active shooter drills and lockdowns. I don’t know what early childhood programs call these now. Before I retired, we had “windy weather drills” for tornadoes and “hiding and leaving” practices for acts of terrorism and gun violence. We used euphemisms to protect preschoolers from knowing about things that we educators had a hard time comprehending. We counseled parents to work extra hard to shield their children from news of terrorism and gun violence, as there was nothing to be gained by exposing them to these possibilities.

But once those little ones are in elementary school and beyond, there are no words to erase what they know is a real possibility. An angry person with an attack rifle could shoot them at school. Or at church. Or when they are playing outside. Nowhere is really safe. My eight-year-old grandson sees a front-page photo in the newspaper of a migrant child surrounded by adults with guns and asks why. Can we in good faith tell our kids that, in the fifty years since 1968, we have done all we can to protect them?

Fred Rogers wrote a lullaby for parents to sing to their children, especially in troubled times:

I’m taking care of you

Taking good care of you

For once I was very little too

Now I take care of you.

I think if he were alive today, Mr. Rogers would have tried his best to comfort and reassure our children that the adults in charge would step up to the plate to protect them. His widow Joanna described how her late husband’s show still touches people, “because our country is a scary place right now. I think people need a comfortable lap to sit in and someone to say, ‘Your feelings are manageable and mentionable.’ They need comfort.”

On this, the 50th anniversary of Mr. Rogers Neighborhood, there have been a PBS special Mister Rogers: It’s You I Like on his life and Morgan Neville’s wonderful movie documentary Won’t You Be My Neighbor. A film starring Tom Hanks as Rogers, You Are My Friend, is due to be released in October. 1968 was the beginning of a frightening time that felt much like life does today in 2018. Perhaps this is why people weep at showings of Won’t You Be My Neighbor.

I invite you to read my book Terribly Strange and Wonderfully Real and join n my Facebook community.