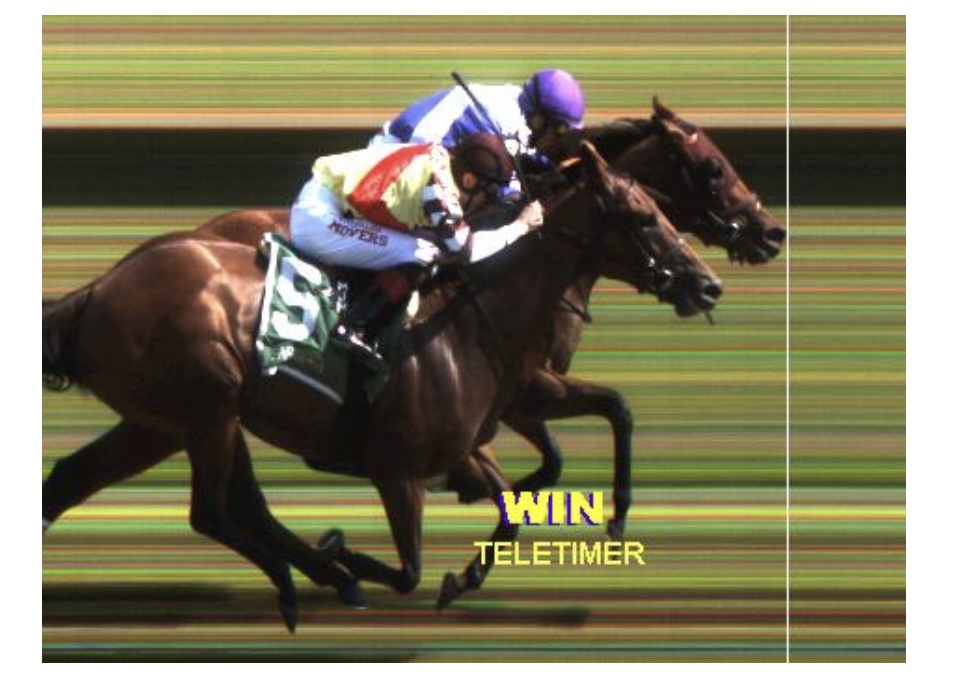 [By way of preface, I acknowledge that I am prompt-challenged.  I fancy myself an unbroken stallion bucking against imposition of a bit and rein, and a rider on my back, when confronted with the strictures of prompt compliance. I apologize for casting myself into this heroic, romantic, and self-aggrandizing metaphor. I especially apologize to the prompt purists, to the rule minders, and to the civilized orderliness of the system. I hear Linda Ronstadt crying Desperado (“…Desperado, why don’t you come to your senses?/Come down from your fences, open the gate…”).

I was wrapping up my three racing day visit, up to my elbows and knees in routines I had wallowed in most every summer since 1975.

On the other hand, while the following story may appear to be orbiting far from the prompt, I anticipate that it will draw back into prompt proximity as it rounds the oval and approaches the finish line, in the sense that I was filled with desire for a thing, and at the cash register a lot of cash slipped through my fingers.]

The scene was the Saratoga Race Course in Saratoga Springs, NY, an upstate hamlet known to its admirers as the “Spa”, with a gamy and colorful history, including that its illegal gambling roadhouses were run by Meyer Lansky on behalf of the Mob into the 1950s, when political do-gooders (e.g., Gov. Tom Dewey) forced Meyer to close shop.  He took his talents to Cuba where he effectively ran the tourist and entertainment industries under (or in partnership with) General Batista until Fidel busted the show on New Year’s Day, 1959 (see Godfather II, with Hyman Roth playing the role of Meyer Lansky).

I was wrapping up my three racing day visit, up to my elbows and knees in routines I’d been wallowing in most every summer since 1975.  One of my usual routines is to lose money at the track, but not always. Other routines include embracing the ambience, swellness, and escapism of the place, eating and drinking like a forty-something (I’ve weened my way off cigars since I was a fifty-something), donning seersucker and madras, strolling the boulevard, and practicing the dark art of handicapping late into the nights. The New York Racing Association adjourns to the green and leafy Spa for two summer months each year, on vacation from the massive urban betting factories of Aqueduct and Belmont Park.

It came to pass, benefiting from good luck and a glimmer of savvy (for example, I savvily noticed the 7 horse in the 4th race, Gandy Dancing, while not showing much elsewhere, had twice won over the Spa surface in prior years, so maybe he had a liking for Adirondacks oats (there is a well-trod expression “horses for courses” which inspirits this equine conjecture) (for another example, I savvily noticed a comment in the Racing Form race analysis for the 3rd race that one of the horses, Jay’stalker, was “making a belated debut for underrated first-out trainer Levine [Bruce N. Levine, apparently a Jewish trainer]”, so maybe someone knew something), that I had a live ticket entering the 5th race in the Pick 5 betting pool.

Which is to say that prior to Race 1 I had bought a ticket with picks for the first 5 races, that my picks had won the first 4, and that I had 3 live horses on the ticket for the 5th Race, so that if any of my 3 horses won the 5th Race, I would win the Pick 5.  Reflecting the degree of difficulty of this feat (i.e., there were long shots among the winners of the first 4 races, including the afore-referenced Jay’stalker and Gandy Dancing, so that it was unlikely there would be many tickets to have survived the gauntlet so as to be eligible to share the winner’s pot with me), I surmised there would be a substantial pay day if one of my 3 horses won.

I was giddy with excitement.  I apologize to the humanities majors among you for the technical complexity of my situation, and of my prose.  I should have posted a prefatory warning: “Beware of the math!!”

I filled my time between the end of the 4th Race and the start of the 5th Race checking my pocket to see if I had lost my ticket, and also trying to figure out a way to effectively hedge.  I had 3 horses on my ticket, there were 10 horses in the race.  I win if any of my 3 win.  I lose if any of the other 7 win.  Should I, for example, make bets on some or all of the other 7 so as to assuage the ignominy of coming close to a pile of money, but ending up with nothing? I did spread some bets among the other 7, not pursuant to any mathematically coherent strategy, more like casting fates into the wind.

One of my horses, the 5 horse, broke into the lead in the deep stretch.  My heart nearly jumped out of my mouth.

But then in the last bound before the finish line, the 7 horse, unbet by me, nosed (half-nosed) ahead to win the race. My featured image shows this sad result, and the extreme closeness of it. 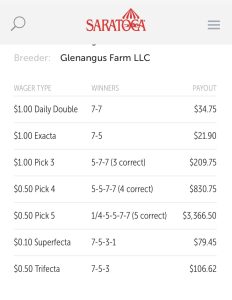 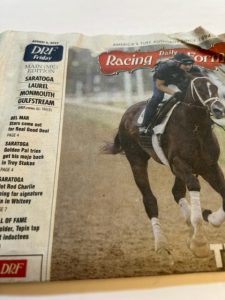 7 Responses to A Very Expensive Nose