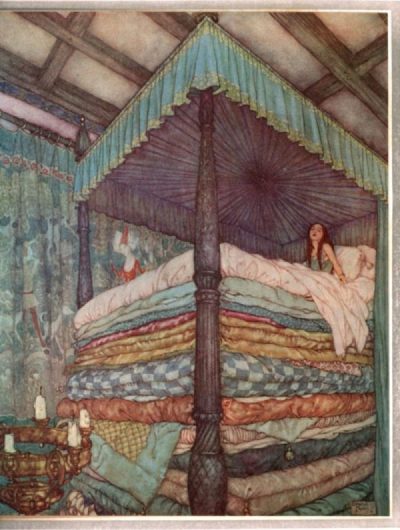 I have no particular memory of having fairy tales read to me when I was small, or of reading them myself when I was older. But I certainly knew all the classic fairy tales, whether involving princesses or motherless children, fairies or elves, or various animals (wolves, pigs, bears, goats), so I must have absorbed them in some fashion now lost in memory’s haze. I don’t have a favorite, but here are two that have special meaning to me for different reasons.

I can't think of one fairy tale that is my favorite, but here are two that have special meaning to me for different reasons.

The Princess and the Pea

This fairy tale seems sillier than most, and the last line of Hans Christian Andersen’s version – “Now see, that was a real story!” – suggests that he knew it was hard for even young children to believe. The plot goes like this, if you’ve forgotten. A prince is ready to get married, but is told that he can’t just marry any old princess, she has to be a “real” princess, as defined by various characteristics, depending on which version of the story you read. He travels around to other kingdoms, but all of the princesses are unsatisfactory. Back at his home castle, one night there is a terrible storm, and answering a knock at the door he finds a very wet princess standing there seeking shelter. So of course he invites her in. To find out if she is a “real” princess, the queen puts a pea underneath twenty mattresses, saying that only a real princess will feel it. The next morning when the princess comes downstairs and they ask her how she slept, she says she couldn’t sleep a wink because there was something hard in the bed and she is black and blue all over. This shows she is a “real” princess, so they get married, and presumably live happily ever after. The pea is put in a museum.

Why do I like this fairy tale? Because it resulted in a wonderful Broadway musical comedy.

Once Upon A Mattress opened in May 1959 and ran until July 1960. It turned the Hans Christian Andersen tale into a hilarious comedy, and featured the Broadway debut of a new young talent named Carol Burnett. She plays a brash, unrefined princess who comes from the northern swamps. She arrives at the castle dripping wet, not because of a storm, but because she swam the moat to get there. Her name is Winifred, but she goes by Fred. She is the opposite of what the queen is looking for in a “real” princess to marry her son. The queen, who has devised different tests for twelve previous princesses, calculated to make them fail, decides that for this one, it should be a test of her sensitivity, and thus comes up with the idea of a pea under twenty mattresses. At the end of the show, after Fred qualifies to marry the prince because she had a sleepless night, the court jester is shown removing weapons and other sharp objects from beneath the mattresses, which had been placed there, unbeknownst to the queen, to ensure that Fred would pass the test.

Seeing this musical when I was eight years old, I fell in love with it, and with Carol Burnett too. We got the original cast album and I learned all the songs, many of which I can still remember, including the one that provides the title to this story.

As I’m sure everyone knows, in this story a swan egg gets mixed in with a bunch of duck eggs. When it hatches, it doesn’t look like the other ducklings, so everyone hates him and is mean to him. He gets chased away from many different places, and when finally he finds some wild geese who are willing to accept him even though he is ugly, they all end up getting shot by hunters. (That scene is not in most children’s books, but in the original Hans Christian Andersen version, the water turns red with their blood.) A couple of miserable, lonely years pass, but finally he sees some beautiful swans. He thinks they will hate him too, and he expects to be pecked to death, but it turns out they welcome him, and when he looks at his reflection in the water, he finally realizes he is a swan.

I don’t know if this tale had any particular impact on me when I was a child. But for the past fifty years I have described my transition from high school to college as the ugly duckling becoming a swan. In junior high/high school I was not popular. I had braces for some of the time, and glasses for most of it, I was too tall and too skinny, and worst of all, I was too smart and too outspoken. Even at a school which was entirely college prep, girls were expected to be more decorative than intelligent. I never had a real date until senior year of high school, and even then it was a boy from outside, not from my school. I didn’t think I would ever fit in. And then I got to Radcliffe, and all of a sudden I had lots of friends, and lots of boys asking me out, and I didn’t have to hide that I was smart in order to be popular. I truly felt like the ugly duckling who had turned into a swan! 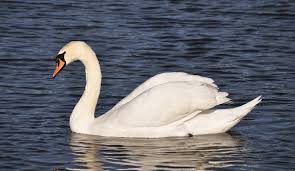 16 Responses to An Opening for a Princess